Not just the folks at Fox but Mark Halperin are suggesting opponents staged a crazy anti-Obama question. But why? 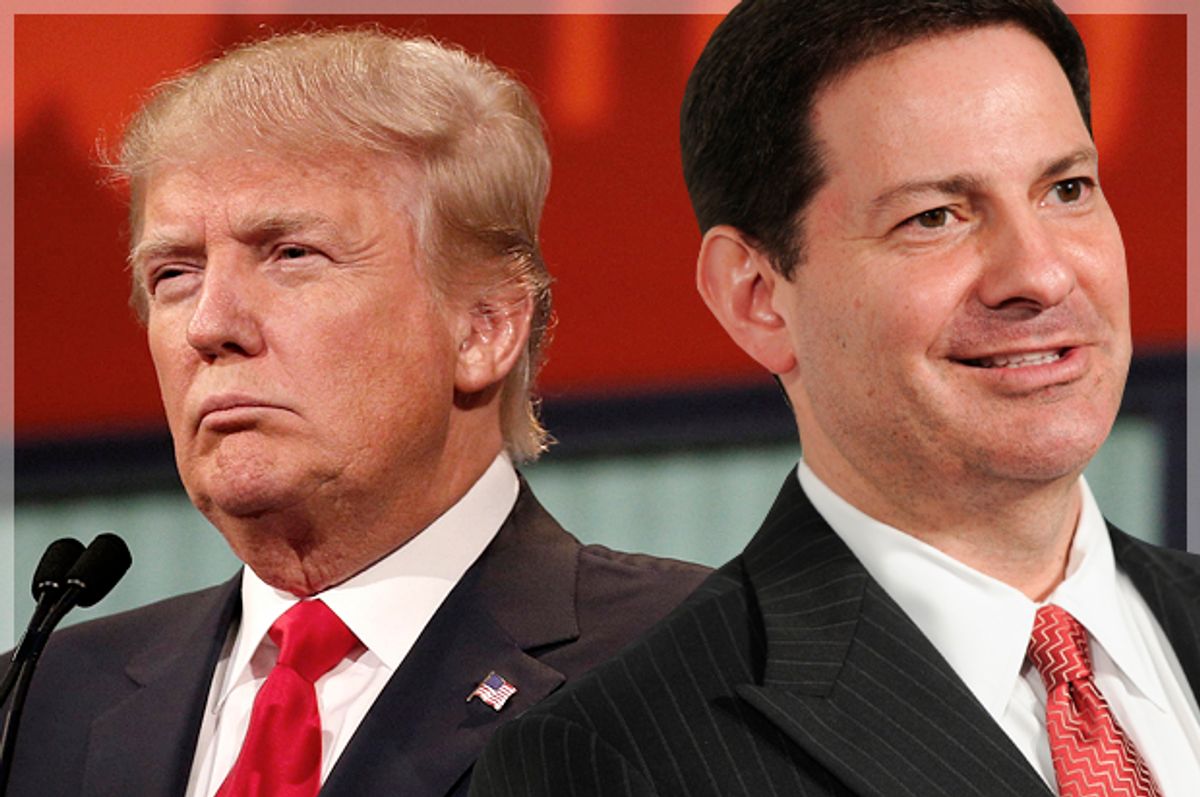 The Summer of Trump officially closes with its silliest episode yet: the spectacle of Trump Truthers, an assortment of Trump-friendly media figures who insist that the man who said President Obama is a Muslim and “not an American,” and that Muslims must be gotten “rid of,” at a New Hampshire rally, was some kind of opposition plant, not an actual Trump supporter.

First out the gate was Ann Coulter early Friday morning. “I say he’s a liberal plant,” she tweeted. Brian Kilmeade of "Fox & Friends" echoed Coulter, insisting the anti-Muslim questioner “sounds like a plant, to be honest.” Fox’s Kimberly Guilfoyle and Eric Bolling continued peddling that theory all day. Laura Ingraham agreed, tweeting that the man “sure sounded like a put-up--cartoon presentation, bad acting.”

Media Matters ran down the list of right-wingers trying to bail out Trump, who was uncharacteristically media-shy after the controversy erupted, even canceling a scheduled public appearance on Friday (allegedly to close a business deal.)

He doubled down on his questions – it’s only OK to use the cliché "doubling down" when talking about Halperin – in a long Twitter debate with journalists who challenged him, insisting the guy “sounded like the Travolta mumble in the dance scene in ‘Pulp Fiction.’”

It’s one thing for paid right-wing propagandists to suggest Trump’s questioner wasn’t an actual supporter. It’s another for an allegedly serious journalist to push the claim, with zero proof. (To be fair, my friend Chris Hayes raised the question on his show Thursday night, immediately after the Trump rally, but it was more in the vein of telling viewers the “theatrical” questioner hadn’t been found, so no one could decisively say whether he was an actual Trump supporter.)

But it shouldn’t be hard to believe a Trump supporter holds those views. Trump personally took the birther nonsense from the fringe of politics to center stage in 2011, and he revived the claim in 2012 even as he was endorsing Mitt Romney.

Trump has also suggested Obama was Muslim, telling Fox’s Bill O’Reilly in 2011 that it’s possible Obama "doesn't have a birth certificate. He may have one, but there's something on that, maybe religion, maybe it says he is a Muslim.”

Besides: the man’s claim that Obama is a Muslim, and also “not American,” puts him squarely in the mainstream of the Republican Party. A recent Public Policy Polling survey found that only 29 percent of Republicans believe Obama was born here, and more than half say he’s Muslim. Those numbers climb among Trump supporters: two thirds say he’s a Muslim, and 6 in 10 believe he wasn’t born in the U.S. I don’t know why is so hard for anyone to believe that a man at a Trump rally would ask that kind of question.

To his credit, Trump is denying claims that the questioner was a plant. “I don’t think he was a plant,” he said Monday. “I knew that question was going to be a controversial one. I have no obligation, moral or otherwise, to defend the president.”

Then he brazenly blamed the entire birther issue on Hillary Clinton's 2008 campaign. “What I’ve said is nothing compared to Hillary,” claimed the man who so dogged the president with birther BS he released his long-form birth certificate at a public event.

Let me concede: It’s possible the man at the Trump rally was a plant. So far, nobody has found him to interview him, at least not yet. But I don’t know who’d bother to plant him. What would they have to gain? The kind of people who’d be upset that Trump failed to rebuke the anti-Muslim birther aren’t likely to support Trump in the first place; most actual Trump supporters agreed with the guy’s premise.