Smart is the new sexy: The stunning, welcome rise of "sapiosexuality" 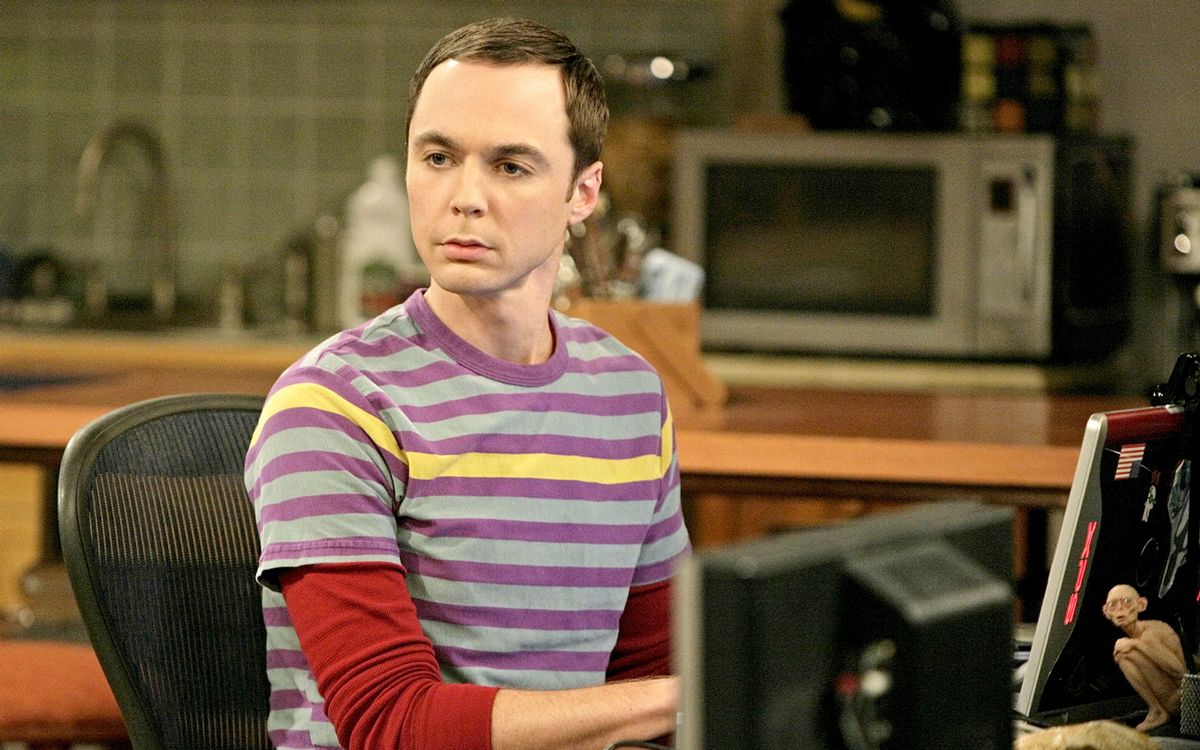 You know what’s hot? Intelligence. "Brains are the new tits!" shouts a T-shirt slogan I saw recently. It also happens to appear on a Facebook page for sapiosexuals. Because, yes, there is indeed a word for desiring smart people: sapiosexuality. And "sapiosexual" has become an increasingly common way of identifying oneself on dating sites and apps to emphasize intelligence as an essential criterion in what can often be a superficial, looks-obsessed world.

But what does it mean to be seek intelligence when it comes to dating? Is it simply about communing with like-minded souls? Or is it about looking down on those who don’t measure up? Is it about knowing lots of trivia, such as the questions posed in an OkCupid “sapiosexual fetish test,” or a deeper way of assessing one’s gray matter?

For bisexual sex writer Kate Sloan, a self-identified sapiosexual, it’s simply a fact of life. “I first heard the word probably three or four years ago and it immediately resonated with me once I found out what it meant. Along with enthusiasm, humor, and kindness, intelligence is one of the main things that makes me really pay attention to someone in a romantic and sexual way.”

Physical attractiveness does matter to Sloan, but “someone who’s smart tends to look way better to me than someone who’s not.” She’s not marching into her dates armed with an IQ test, but she does have ways of figuring out if they’re likely to be a mental match. “I don’t consciously try to assess people’s intelligence,” Sloan explained, “but I definitely do notice things like: How many of my jokes do they get? How fast do they respond when I ask them a question? What’s their vocabulary like? Are they comfortable talking about loftier subjects than interpersonal gossip and the weather? I think intelligence often goes hand-in-hand with humor, or at least the kind of humor I appreciate, so if we’re making each other laugh a lot, we’re probably on a similar wavelength intellectually as well.”

When someone doesn’t live up to her standards in the brainiac arena, it’s glaringly obvious. “In high school, I dated this guy who just wasn’t anywhere near as smart as me—or at least, he wasn’t smart in the ways that I value and understand,” she recalled. “I remember I used the word ‘swoon’ to describe how he made me feel, and he asked me, ‘What does swoon mean?’ Another time, we got into an argument because he had been flirting with another girl, and I asked him, ‘Do you even know the meaning of monogamy?’ and he admitted that he, in fact, didn’t know what the word ‘monogamy’ meant. I had been slowly discovering over the course of our relationship that he just wasn’t as smart as I wanted him to be, and those two incidents were basically the death knell of my attraction for him.” As someone who’s judged a new acquaintance for not knowing what kale is, I can relate. When I think about my idealized, enlightened, Zen self, I don’t want to be someone who could be perceived as an intellectual snob, but on some level, I am. Maybe we all are to some degree—just not the same degree.

Drawing the line between desiring “intelligent types” and using your own subjective judgment calls to rule out the “unintelligent” makes many people uncomfortable. Plenty of women who value intelligence—their own and that of potential partners—have balked at the ways “sapiosexual” is used in practice. At xoJane, Emily McCombs questioned whether it even has any real meaning at all. “Who isn’t looking for a smart partner?," she writes. "It’s right up there with ‘I like to have fun’ in the realm of things that applies to basically everyone, and therefore doesn’t really seem worth stating.”

Let’s not forget, the term is still relatively new, only becoming prominent in the last few years, so even those who might technically fit into the category don’t always know what it means. Melissa Toler, a life coach who’s documenting her dating journey as a single woman by blogging at Project 52 Dates about going on 52 dates in one year, said she had to look up the term, after seeing it used frequently on Tinder. When she did, she found it “a little pretentious.” Why? “I think I’m very very intelligent, but I don’t necessarily need a term to describe my intelligence in my dating,” said Toler.

On a related note, for many, the term itself comes across as equivalent to, say, name-dropping your Ivy League school or any highbrow term that only others in the know are going to pick up on. “Is there anyone more obnoxious than someone who goes out of their way to identify themselves as a ‘sapiosexual’ cause if so let me know” Tweeted @BookofTamara, along with, “Hi I’m a crossfitting vegan sapiosexual libertarian atheist how can I annoy you today.” Or, as Samantha Allen put it bluntly at The Daily Beast, “‘sapiosexual’ seems to circulate primarily as a layer of pretension on top of a more traditional sexual identity. It’s a sexual orientation for people who think that they’re too smart to have a sexual orientation.”

More from DAME: "Is There Such a Thing As a 'Dream Job'?"

But beyond semantics, even bringing up “intelligence” forces us to ask what, exactly, we mean by the word. Can intelligence be measured over the course of a date or online flirtation? One of the biggest criticisms of the use of the term sapiosexual I encountered is its penchant for elitism, especially when it comes to using college education as a qualifier. As my friend Rose Caraway, a writer, podcaster, and proud sapiosexual who’s built her brand around being the “sexy librarian,” told me, “Book smart doesn’t always translate to intellectual. There are intelligent people out there, from all walks of life, who’ve never stepped foot on a university campus. When I meet a brilliant person who never graduated college, I find them more attractive on a sapiosexual level. They not only have the self-education, they have the drive to make it happen themselves. And that is incredibly sexy.”

This is a lesson Toler has learned personally. A college degree used to be a must for anyone she dated. Now, she’s loosened that requirement, and learned a lot from the change. “In my experience with Project 52 Dates, I have found that emotional intelligence is far more important than the number of books you’ve read or the number of degrees you have,” said Toler. “I’ve dated a couple of men who did not go to college but were able to engage me in extremely intelligent conversation.”

This is a wise move, according to Jon Birger, author of Date-onomics: How Dating Became a Lopsided Numbers Game. He writes in the book that since 1981, “women have been leaving men in the educational dust,” and has the numbers to back up his claim. In 2012, “there were 34 percent more women than men who graduated college,” and the National Center for Education Studies predicts that gap will leap to 47 percent by 2023. Birger said in a recent interview, “I think we’re going to be hearing more about what I call ‘mixed-collar marriages,’ which are pairings of college-educated career women married to working class, non-college educated men.” He’s apparently onto something; as Twitter user @AllThingsJen Tweeted to Birger, “I found my husband after I unchecked education on dating sites. Many of my friends with grad degrees did too …”

Jo Weldon, headmistress of the New York School of Burlesque and author of The Burlesque Handbook, has mixed feelings about what she calls “‘I’m attracted to smart people’ declarations.” She doesn’t go so far as to call rallying around sapiosexuality pretentious, but believes it can be problematic. “I think some people are inordinately proud of it, and use the idea of it to express their own intelligence and depth. Intelligence is measured in our culture by some potentially very classist yardsticks, such as college education and the way leisure time is spent. I get that it’s in contrast to valuing people solely for more superficial, sexist, and consumerist reasons, but I think we have to be careful, in saying this is part of our orientation, to not make it a matter of ableist and classist arrogance.”

It’s hard to fault Weldon’s logic when it’s placed next to this self-serving bit from a blog post by sapiosexual Justin Gammill: “A common trait among sapiosexuals is that they can almost instantly identify intelligence in others, and when they do, it is found to be extremely attractive.” Gammill uses the example of someone reading a book “about obscure Russian poetry,” when a stranger approaches and comments on the book. “That person actually having knowledge about things that interest your brain, for a sapiosexual, is just about the sexiest scenario they can imagine.” On one level, I get it. I get excited when I see someone reading a beloved book too. However, Gammill misses what can be such a profound experience: sharing your love of a book (or music, film, art, etc.) with someone who hasn’t encountered it before, not as a lofty know-it-all teacher, but as a peer sharing something you’re passionate about.

In other words, when sapiosexuals judge how smart they think others are, based on very little evidence and using a very narrow framework, they’re almost guaranteed to be denigrating those who don’t fit into their definition of “smart.” As McCombs wrote, “My cynical suspicion is that most sapiosexuals are generally defining intelligence as owning a copy of Infinite Jest, NOT owning a television, and generally feeling just a little bit superior to the rest of the world.”

More from DAME: "Does Wanting Only One Child Make Me a Bad Mother?"

Last weekend, I attended Bawdy Storytelling, a monthly sex-themed storytelling show held in various cities whose September theme is “sapiosexual” (Caraway will perform at the September 16th show in San Francisco). I was expecting stories about people flaunting their intelligence, command of the English language and general aura of braininess. Instead, I found something so much better: women who were willing to laugh at how knowledge about dating is actually about people smarts, not rote learning. Comedian Gabi Conti shared her tale of shadowing a dating coach, the kind who thinks he knows it all but really doesn’t, while writer Amy Jo Goddard told of sexual role-play gone wrong when she misheard a woman’s accent and thought she wanted one kind of masochism, when she actually wanted something completely different. I most appreciated that the performers were all willing to laugh at themselves and their foibles; no matter how smart you are, you’re never going to know everything, and acknowledging that can be pretty damn hot, not to mention relatable.

If you only choose partners based on the way our culture tends to view intelligence, you’re missing other valuable ways of assessing whether someone would be a good partner. I’ve known plenty of people I’d go so far as to call brilliant on an intellectual level, but on a human to human level have major catching up to do. Or, as Krissy Brady, who labeled sapiosexual “the most obnoxious online dating buzzword in history,” phrased it, “We’re all intelligent in some ways, and completely hopeless in others. It’s called being human.”

There’s never going to be a single test you can administer to find out someone’s emotional intelligence, how they’ll treat you (in bed and out) or what kind of person they are, beyond their brain; for that, you’ll need to talk, connect and figure out if you have chemistry—the outside the classroom kind.