The most bizarre political scandal of the decade: Why has David Cameron been accused of, um, defiling a dead pig?

No, you didn't misread 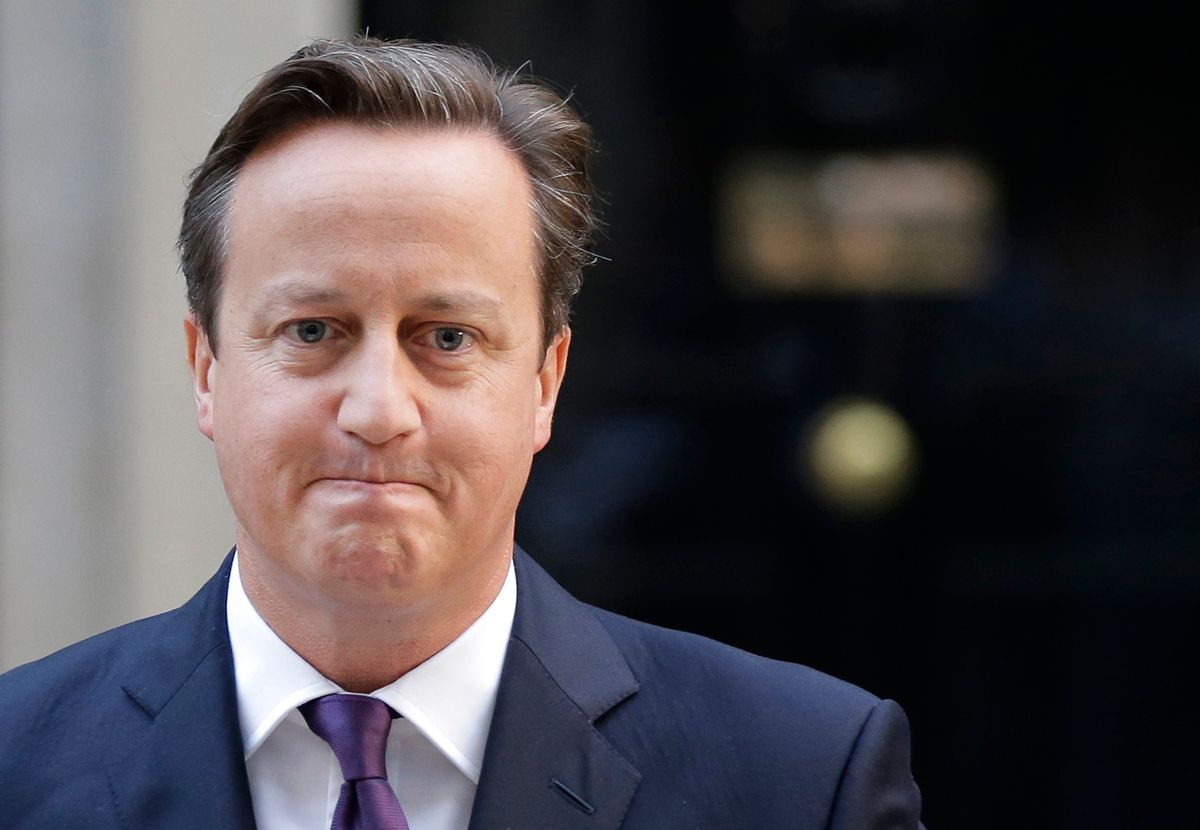 British Prime Minister David Cameron leaves after giving a statement to the media about Scotland's referendum results, outside his official residence at 10 Downing Street in central London, Friday, Sept. 19, 2014. Scottish voters have rejected independence, deciding to remain part of the United Kingdom after a historic referendum that shook the country to its core. The decision prevented a rupture of a 307-year union with England, bringing a huge sigh of relief to the British political establishment. (AP Photo/Lefteris Pitarakis) (AP)
--

The words "Prime Minister" and "once took part in an outrageous initiation ceremony involving a dead pig" do not often appear side by side, but that is the situation British prime minister David Cameron found himself in on Monday.

These days, Cameron, a Conservative, likes to project an air of easy metropolitan affability. He has a lovely wife and some adorable children, is fond of friendly sweaters and is famously into "chillaxing."

That image stands in sharp contrast to the sheer insanity of one of the allegations leveled at Cameron in a new biography, "Call Me Dave."

The book, which is being serialized in the Daily Mail, comes from Lord Michael Ashcroft, a very rich former Tory bigwig who had a massive falling-out with Cameron. (The Mail helpfully put the word "REVENGE!" in giant type on its front page.) "Call Me Dave" makes no secret of its trashiness. Ashcroft and his collaborator Isabel Oakeshott were out for dirt, and what dirt they uncovered. There are rather uninteresting stories about "dope smoking" and the like, but they pale in comparison to what has now been dubbed the world over as "Piggate." It seems that Cameron got up to some decidedly un-kosher behavior when he was trying to join a fancy Oxford University dining club.

A distinguished Oxford contemporary claims Cameron once took part in an outrageous initiation ceremony at a Piers Gaveston event, involving a dead pig. His extraordinary suggestion is that the future PM inserted a private part of his anatomy into the animal’s mouth....the pig’s head, he claimed, had been resting on the lap of a Piers Gaveston society member while Cameron performed the act.

The source also said there were pictures.

The best part of the whole thing may be the winking decorum that Ashcroft applies to such a squalid suggestion. We are left, somewhat ridiculously, to guess what "private part of his anatomy" Cameron may have stuck in this porcine corpse. (His toe, perhaps?)

Needless to say, the allegation got a reaction. Cameron's spokesperson was besieged with questions. She initially refused to discuss the claims. Later, unnamed Tories denied the story outright.

Not that that mattered. Twitter was soon awash with uncomfortable images of Cameron cheerfully hugging pigs. Many noted the story's unnerving similarity to an episode of dystopian TV series "Black Mirror" in which a fictional prime minister is forced to violate a pig. (The show's creator Charlie Brooker said that he'd thought up the storyline himself, which just makes it even more brilliant.)

Beyond its amazing shock value, the Piggate story has some clear political risks for Cameron. The revelations--assuming they're true, and how lame would it be not to assume they're true?--are even more damaging because they play into one of the more challenging aspects of Cameron's identity: his outlandishly elite background. He has already had to endure years of scrutiny thanks to his membership of the Bullingdon Club, a secret Oxford society whose habits are beyond parody.

(The Bullingdon Club's most famous tradition is the trashing of local pubs. After the lads—dressed in tailcoats—are done smashing the place to bits, they then slip the proprietors some cash and leave.)

A photo of the club's members which includes Cameron has become one of the most notorious images in modern British political history. He has chalked up his participation in this charming group to youthful boisterousness.

Despite the opposition Labour Party's best efforts to tie him to it, Cameron mostly managed to overcome the distastefulness of his Bullingdon Club past. Pigs, though, could be another matter altogether. One thing's for sure: it'll be a cold day in hell before you ever see David Cameron and a pig within 2000 feet of each other ever again.