Colbert's Ted Cruz (calm and fair) smackdown: How "The Late Show" is triumphing with even-handed intelligence in these polarized times 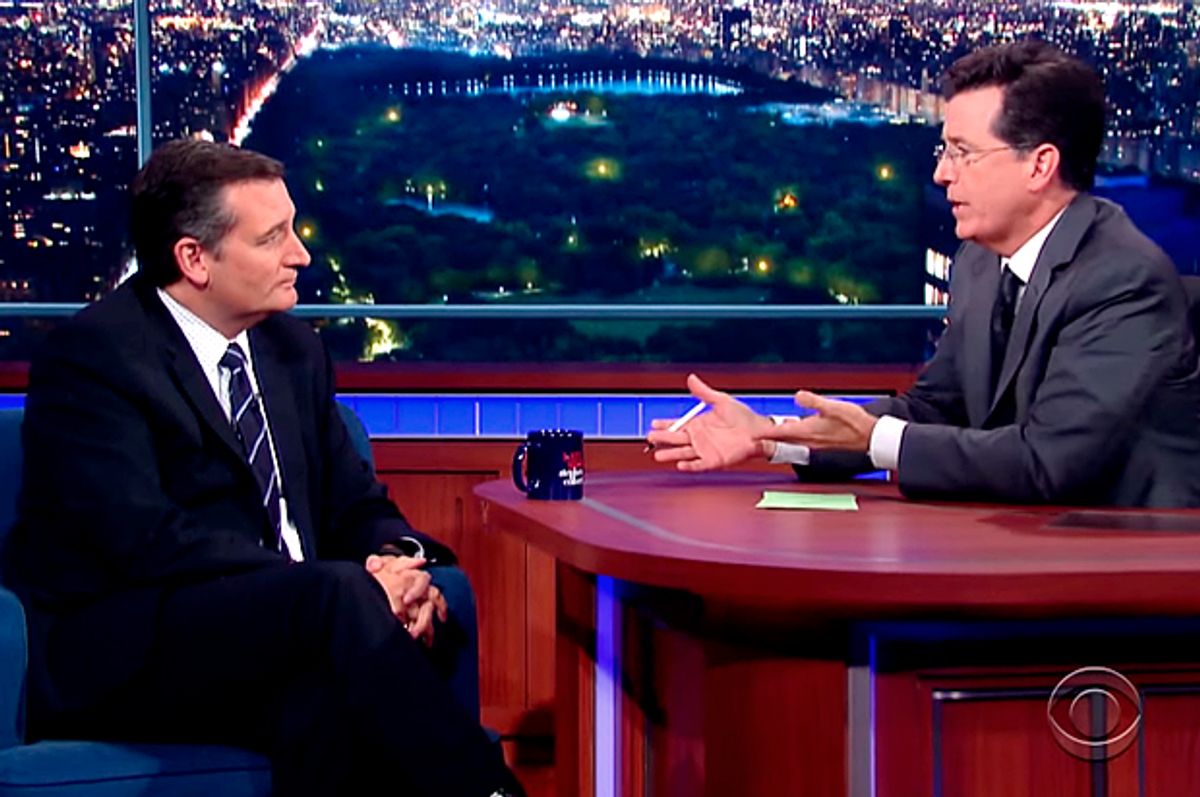 Over the years, Sen. Ted Cruz has developed a patented manner that combines the earnestness of the used car salesman, the abrupt heartlessness of Dana Carvey’s Church Lady, the baffling oddness of Quentin Tarantino, and the assured intellectual aggressiveness of the debate-team champion.

But on “The Late Show With Stephen Colbert” last night, Cruz found himself dropping most of his poses and actually talking about politics and governing. He wasn’t any more likable or persuasive, but we got a rare glimpse of the substance behind the persona.

Since his debut helming David Letterman’s old show, a few optimists predicted that Colbert – who has also recently dropped an old mask of his own – would become an important and grownup player in the discussion of politics. It’s still early, but so far he’s made good on these hopes. He’s now had Jeb Bush, Joe Biden, and Sen. Bernie Sanders on his show, and he’s demonstrated that he can speak, with a mix of seriousness and humor, to political figures better than just about anyone on television. Coming so soon after the weirdly brain-dead GOP debate on CNN, with its pandering questions, the Cruz interview served as a reminder of how valuable a part of the mix Colbert is becoming.

The Cruz interview started out conventional and light-hearted; it didn’t reveal much but allowed Colbert to connect with the jowly Texan. The highlight of the interview came when Colbert asked Cruz about the unreflective Reagan-worship in today’s GOP, which was on evidence at the debate the Reagan Library and on Cruz’s discussion of Reagan Democrats. “Reagan raised taxes, okay,” Colbert asked. “Reagan actually had an amnesty program for illegal immigrants. Neither of those things would allow Reagan to be nominated today. So to what level can you truly emulate Ronald Reagan?... Could you agree with Reagan on those two things?"

Cruz tried to squirm out, and on the issue of compromising like the Gipper had done, gave a twangy response as to why he would not “give in more to Barack Obama.” He later fell back on the usual half-truths about the miracle of the Reagan economy and his supposed shrinking of the government. (No mention of years of recession or the tripling of the deficit or the undercutting of the middle class or the way the economic cycle Reagan presided over led to the Bush I slump.)

Instead of rolling over, Colbert came right back about Reagan’s tax cuts, and also allowed, rhetorically, that Cruz might have the right plan. When the two discussed gay marriage, and the audience began to boo Cruz, Colbert announced, “Guys, guys, however you feel, he’s my guest, so please don’t boo him.” You can dislike Cruz (as I do) and also think this may’ve been the most important line of the night.

Not every loose end was followed up. But the main way this interview could have been improved was to simply make it longer.

As for Sanders, Larry Wilmore had more fun with him than Colbert did. Despite at least one great question from Colbert – why didn‘t Sanders realize what an insult the term “socialist” was supposed to be? -- and a joke about “messages from giant corporations to pay our bills,” Sanders offered pretty familiar stuff about Scandinavia and college costs and corporate America. Powerful, and things we need to hear, but standard stump-speech stuff. (Colbert does get points for asking about SuperPACs.)

Colbert’s interview with Bush – which was effective not because it sparkled, but because he allowed the candidate to decisively reveal his own tone-deafness -- and his ability to open Joe Biden up about the death of his son, show his real skill. Part of it comes from prodding, part of it from allowing these guys to be themselves. (Or as close as a practiced politician can get.)

Why has Colbert been so successful speaking to politicians? Part of it is that he’s a supremely empathetic human being. He also has the intellectual agility to spar with his guests in a way that’s not just kidding around and that doesn’t let them spout nonsense. His conservative roots in South Carolina also allows him to meet right-of-center pols where they live, even if he and his audience lean left.

We’re getting so many pols on “The Late Show” and other programs because we’re in the middle of a presidential race. Here’s hoping that even after the 2016 election, Colbert keeps inviting – and landing – the people who determine the course the country almost as much as the bank presidents and tech czars. The centrist dialogue around politics that newspapers represented is fading fast, and Jon Stewart’s angry liberal is now offstage, as well. Colbert shows a way to have an intelligent discussion; we need him to keep it up.