Cowardly brutality exposed: The viral video that should change the Israel/Palestine debate forever

A stun grenade flipped into faces of a child and his family. We should never discuss this debate the same way again 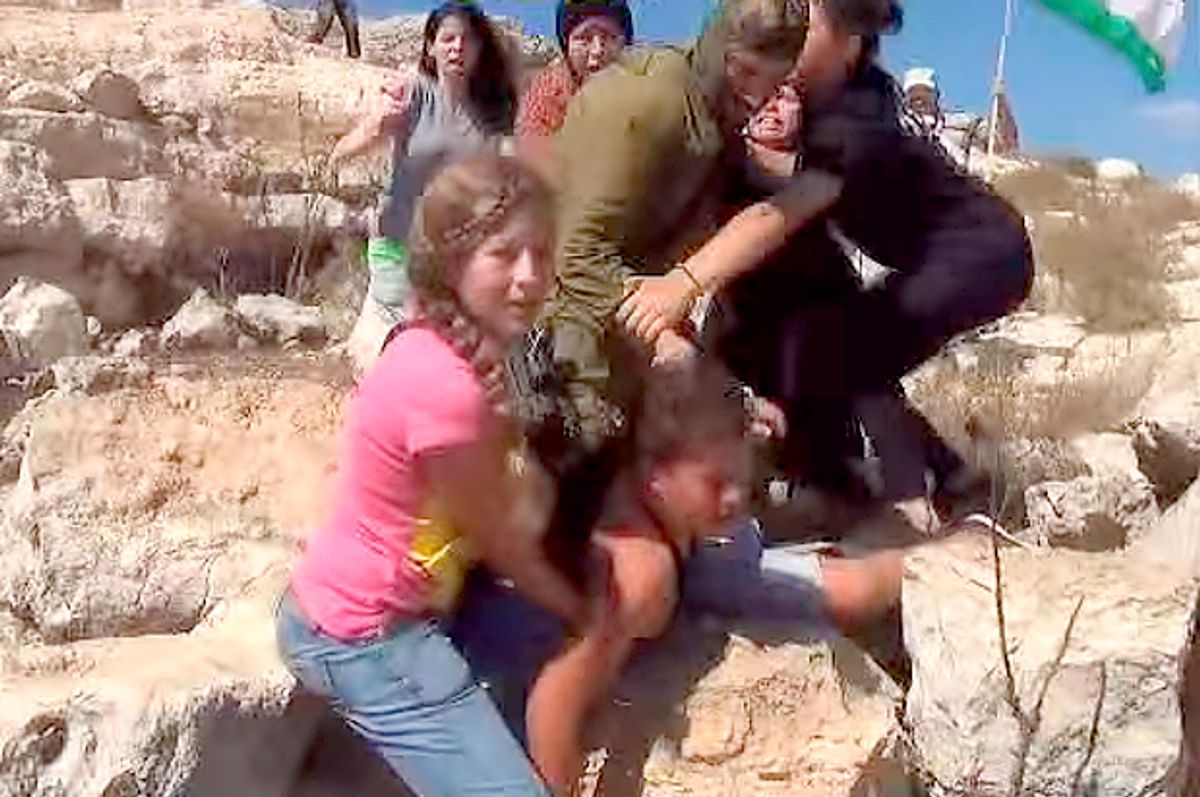 It’s no wonder that this video clip went viral earlier this month.  It shows a masked Israeli soldier throwing a sobbing Palestinian child to the ground, holding him in a headlock, squashing him, and then grappling with an assortment of women and girls as he tries—and ultimately fails—to wrest the terrified boy away from his mother.

Those few moments of footage revealed for all the world to see the sordid reality of Israel’s everyday war against the Palestinian people.  An army that is equipped and ostensibly prepared to take on other armies—but that was last tested against a real army over four decades ago—continues to be unleashed against a largely defenseless civilian population.  And it continues to fail abysmally at its assigned task of bringing that population under control and breaking its will to resist.  Indeed, in political terms, the ending of the video is as instructive as the beginning: as the child is finally freed, the Israeli soldier, stripped of his coward’s facemask, is forced ignominiously to slink away, defeated—though not before sullenly and gratuitously flinging a parting stun-grenade into the faces of the child and his family, having, for all his brutality, accomplished precisely nothing.

The scene sums up on a small scale the past decades of Israeli violence, and it captures the lesson that the Israelis seem incapable of getting into their heads once and for all: that the sheer capacity for brute force—at which they admittedly excel—does not, in itself, translate into political gain, and can, indeed, backfire politically to produce the opposite result from what was intended: courage instead of fear; steadfastness instead of collapse; defiance instead of submission.

One would have thought that the video would have occasioned some circumspection, or at least awkward silence, among Israelis and what remains of their rapidly thinning fan club in the U.S., but no—of course not.  Israel’s minister of culture took to the media to declare that the army’s open-fire regulations ought to be changed to officially permit shooting unarmed Palestinians in order “to put an end to the humiliation.”  Better, then, for the soldier to have gunned the family down in cold blood than to have failed to snatch their 12-year-old.  Such are the choices to which Israel now finds itself reduced.

Meanwhile, the usual suspects on lonely late-night blogs and scarcely read third- and fourth-rate websites tried to recuperate the tattered remnants of Israel’s dignity by trotting out their customary clumsy attempts at character assassination, in this case accusing the child’s father, Bassem Tamimi—a community organizer at the forefront of Nabi Saleh's weekly demonstrations—of running a “masterclass” on political manipulation and even a “media empire.”  How, they ask in feigned shock, could a father put his children at such risk?  (Note that they are, as always, more interested in the representation than in the reality, about which they have nothing to say.)

I asked Bassem Tamimi about the choices that he felt were available to him and his family. He summed it up very simply: When you live under this kind of trans-generational military occupation, he said, the only choice you have is whether to submit to the occupation, yielding to it your land, your home, your liberty, your conscience—or to refuse its arbitrary dictates, its endless litanies of thou-shalt-nots, and to resist it by whatever means are available to you.  Like the overwhelming majority of Palestinians, Bassem and his fellow villagers choose to resist nonviolently, by protesting and by documenting the nature of their everyday lives to a world that is finally beginning to sit up and pay attention on a large scale (as the viral spread of this video demonstrates).  And above all by persisting, refusing to give up and disappear into the oblivion of cold anonymous silence to which the Israelis would consign the entire Palestinian people as they go on colonizing their land.

Clearly, indeed, this isn’t just about Bassem and his family. Throughout the occupied territories, Israel’s war on the Palestinians has inevitably meant a war on Palestinian children. Sometimes this takes the form of outright violence, as in last summer’s assault on Gaza, when, through its utterly indiscriminate bombardment of densely packed neighborhoods, Israel killed 2,205 Palestinians, the vast majority of them civilians, among them 521 children. Such episodes of outright violence are not the norm, however, and Israel’s war primarily takes the form of its systematic occupation and suffocation of everyday life—its imposition of an array of rules, permits, curfews, roadblocks, checkpoints, walls, tunnels and gates hemming in and paralyzing the Palestinian population in order to facilitate the growth and development of Jewish colonies in the West Bank and East Jerusalem.  Accompanying this rigid array of prohibitions and restrictions are midnight raids into Palestinian towns—the Israeli army bursting into family homes in the middle of the night and snatching sleeping people from their beds. According to the United Nations Office for the Coordination of Humanitarian Affairs (UN OCHA), the Israeli army conducts an average of 79 such raids a week: 11 each night.

As if the trauma of midnight raids were not enough—and try, if you can, to imagine one of those from a child’s point of view—Israel doesn’t even spare Palestinian children the trauma of being detained themselves and hauled away from their parents to face harsh interrogation on their own. Israel’s is the only army in the world that regularly snatches children: 654 in 2013 alone, according to UNICEF, of whom 465 went on to face formal charges and indictments. As of June 2015, 160 Palestinian child prisoners were being held by Israel. “Security forces have choked children, thrown stun grenades at them, beaten them in custody, threatened and interrogated them without the presence of parents or lawyers, and failed to let their parents know their whereabouts,” a recent Human Rights Watch report found; “confessions obtained from children in violation of their rights add to the pressure on them to cooperate in plea bargains that result in their imprisonment with reduced sentences.” Confessions obtained from children: These are the abyssal depths plumbed by Israel’s overrated army and its attendant bureaucracy of racial discrimination.

Nor is it only the army that terrorizes Palestinian children and their families.  A network of Jewish colonies sprawls across the West Bank and East Jerusalem, housing over half a million colonists. Many of these are there amorally, in search of government-subsidized rents or nice views without inquiring too deeply into the tedious details of precisely which international laws they are violating by settling there. But some of them are religiously motivated sociopaths—and they are all heavily armed, which, needless to say, the Palestinian population is not. Like army incursions and home demolitions, raids by fanatical Jewish settlers on Palestinian olive orchards, farms, water wells and homes are a weekly if not daily occurrence, and frequently target children. The July 31 firebombing attack by Jewish colonists on the Dawabsheh family home in the West Bank town of Duma—in which baby Ali was burned alive, his parents later succumbing to their burns, leaving his 4-year-old brother Ahmad an orphan—attracted international media attention, but it was not unusual in itself, but rather, according to the U.N., the 16th of its kind this year.  The firebombers must have heard the family burning inside as they took the time to spray-paint something or other about their messiah on the walls of the home.

The Israeli authorities have yet to charge anyone with the Duma firebombing, but that too is no surprise. According to the Israeli human rights group Yesh Din, 92 percent of Israeli criminal investigations of Jewish settler attacks on Palestinians are closed without conclusion; fewer than 8 percent yield indictments, and only 10 percent of those lead to full convictions—which is to say that there is less than a 1 percent chance of a Jewish settler receiving full punishment for criminal violence against Palestinians, including babies. By contrast, the Israelis respond to Palestinian attacks on Jewish settlers immediately and often with indiscriminate force, immobilizing entire districts and hauling away suspects by the dozen. Moreover, as is by now more or less common knowledge, Israel maintains as part of its apartheid regime two completely separate justice systems for the two populations in the occupied territories: Jews, including theologically actuated fantasists, enjoy the protections of Israeli civil law; Palestinians, including children, are subject to the much harsher summary processes of military tribunals.

The struggle captured by that video has to be seen against the backdrop of Israel’s day to day—everyday—war against the Palestinian people, men, women and children alike: shooting them, tear-gassing them, snatching them, harassing them, beating them up, burning them alive, smashing their wells, uprooting their trees, bulldozing their homes, all in order that a population from a different ethnic background can take over their land inch by inch if that’s what it comes to.  This is not a life that anyone would choose for themselves or their children; rather, it’s a life that forces us, all of us, to ask what choices we would make if we were caught in those same circumstances.