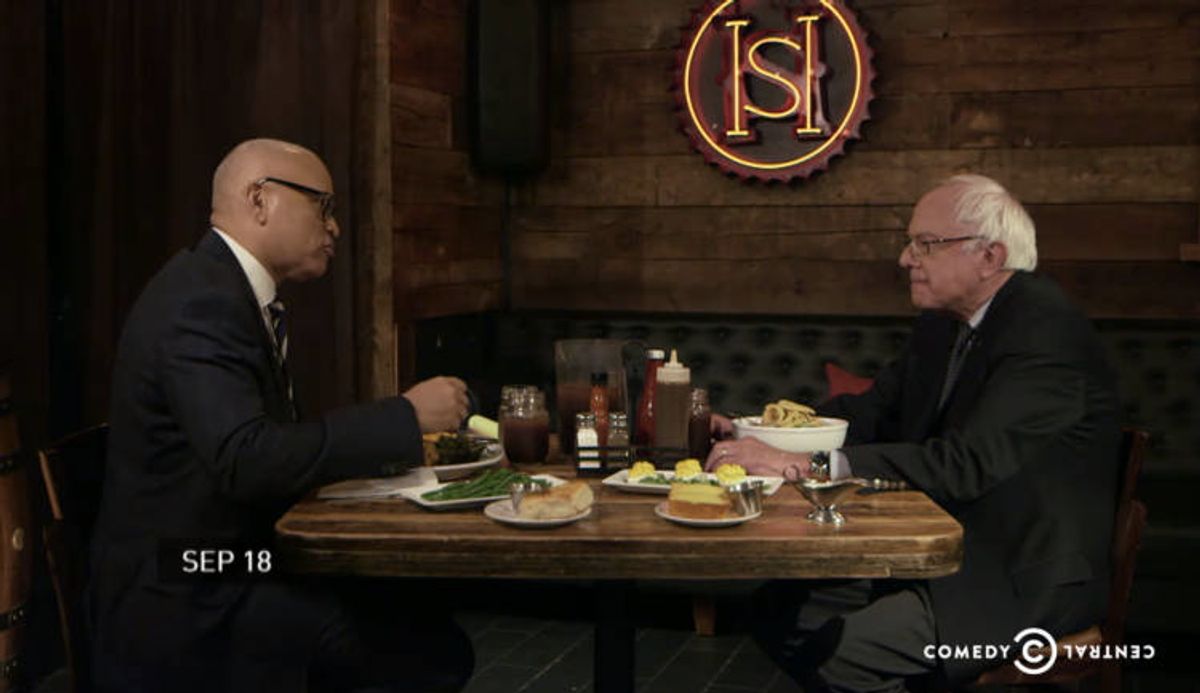 "You are on fire, Bernie," Wilmore opened the discussion, noting that "this is the year that people are anticipating a first."

"And the guy wasn't even born in America," Sanders offered.

“Do you think America is ready for the first socialist president?” Wilmore asked, getting to his point.

“Is that their way of keeping people in Finland?” Wilmore asked.

Wilmore then asked Sanders whether he thought people were afraid of the word socialism. "Are you going to take my deviled egg? Is that what it means,” Wilmore wondered, cramming Sanders' egg, garnish and all, into his mouth. "By the way, socialism tastes fantastic," he added.

Wilmore also noted that Sanders would be the first Jewish president, if elected, and the oldest president. Invoking 1989 classic, Wilmore asked be comfortable with a, let’s say, ‘Weekend at Bernie’s’ situation, to get you through the rest of your administration," before handing the senator a pair of black sunglasses. Sanders, ever a good sport during the entire segment, then did a pretty spot-on Bernie Lomax impersonation.

Wilmore also got Sanders to use the teenage term "on fleek" to describe his criminal justice reform plans, although the 74-year old Vermonter ended up saying a less cooler "un fleek" variant.

"Larry Wilmore says that I should tell you that my plans for criminal justice reform are 'un fleek.' I'm on my way now," Sanders declared to the camera before agreeing to wear a Donald Trump-like baseball cap that read, "Black-Eyed Peas Matter," as a reference to the senator's infamous interruptions by protestors affiliated with the Black Lives Matter movement.

“I’ll be honest with you, I hate it when black people interrupt me,” Wilmore offered, before asking: “What do you think would be a good way to get black people to ‘Feel the Bern?’”

“We’re going to do everything we can to end institutional racism in this country and more,” Sanders suggested. “We’ve also got to deal with real criminal justice reform.”