Ode to the vanishing video store: "Wouldn't it be incredible to have met with someone who experienced having Quentin Tarantino as a clerk?" 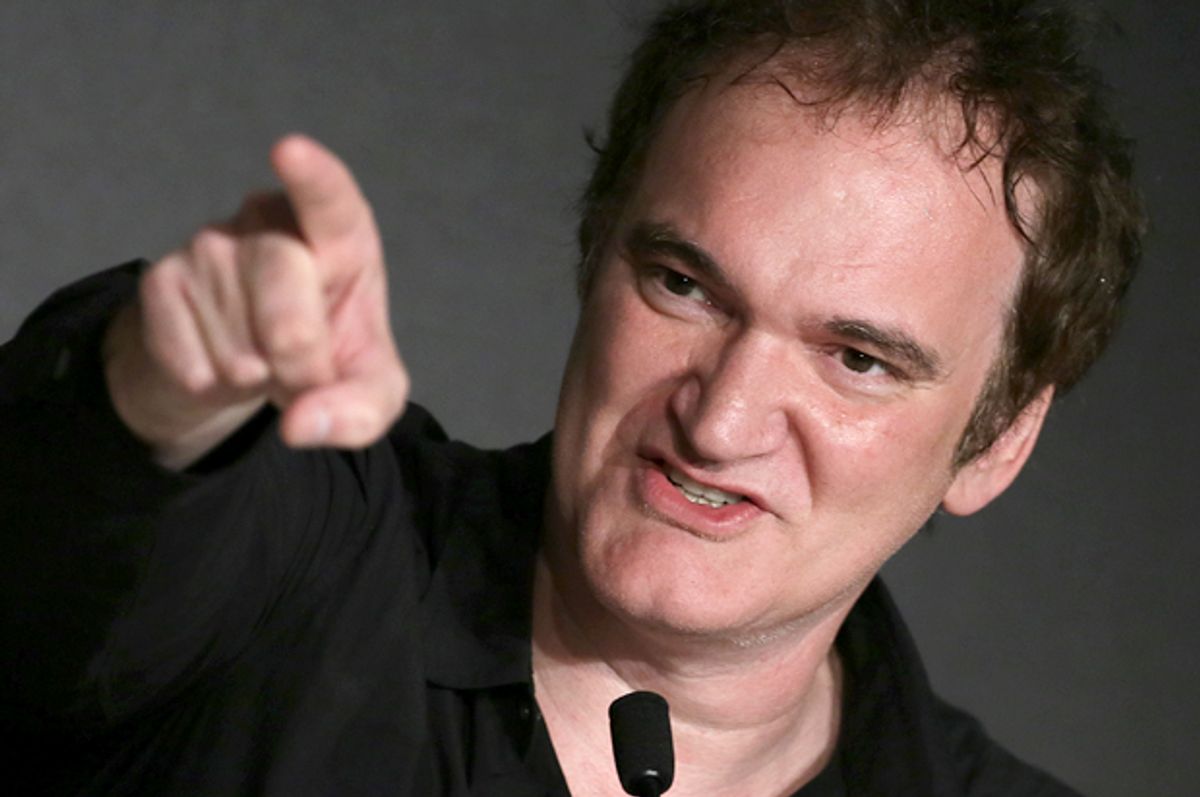 For many Gen Xers and bohemians of all stripes, the video store became a combination of public library, neighborhood bar, and local cinema. Like bookstores and record shops, they’re being slowly done in by online alternatives and rising rents. And compared to those other lamented brick-and-mortar institutions, the video store probably had the briefest heyday.

Brooklyn-based journalist Tom Roston did not want the video store to die unmourned. He spoke to filmmakers – Darren Aronofsky, Allison Anders, Kevin Smith, Quentin Tarantino, Nicole Holofcener – and others about what mattered about these places. Some of these directors spent years working behind the counter.

The result is “I Lost it at the Video Store: A Filmmakers’ Oral History of a Vanished Era,” a slim volume that writer Peter Biskind calls “nostalgic, vivid, and important.”

We talked to Roston from his home in New York; the interview has been lightly edited for clarity.

In general, what did video stores mean to the filmmakers you spoke to? Why were they important places?

The importance was that it’s where they sort of found a passion for film – and more than passion, they learned how to apply their passion. For so many of these guys, what they did was they, because of the technology of the VHS tape, they would repeat-watch. They would watch the same scene over and over again, and it would allow them to study film. So that was the actual technological format, but then also the stores themselves became this place where they were able to immerse themselves in film. Whether it was through directors' sections, and so they could just study one director or another. Or through, you know, the curation of a great clerk, let's say.

Is it fair to say then that video stores in some way shaped the aesthetic, or the style of independent film?

Without question. I mean, I think Quentin Tarantino is one of the most important filmmakers working in the past 20 years, 30 years, and his style, his aesthetic -- which has, you know, redefined not only American film but American culture — was directly rooted in his video store experiences. It was, you know, the pastiche, the ability to go from one film to another, to pick up a kung-fu flick and then compare it to an Orson Welles flick.

A lot of the filmmakers in the book are former clerks. Kevin Smith, when he was working at his little video store in New Jersey  — as with most video stores, as you know, they would usually have a TV on with a movie showing, and for Kevin, he was working there day in, day out. He wasn't watching the film, he was just doing his thing, filing stuff, doing some paperwork. But for him, a movie like “Blue Velvet” playing 45 times, you know, just hearing the audio, the dialogue – it taught him dialogue.

And he even says maybe it was even a handicap to him in terms of his visuals, because he never even looked at the movie.

You know, “Clerks” is an important film in terms of the way those guys talk, without question.

So aesthetically it sounds like there's a kind of pastiche quality that we see in Tarantino, there's a density to the dialogue that we get from people who spent hours and hours with great film dialogue in their ears. Is there anything else about independent film that came from the existence of video stores, or from filmmakers who worked in them?

Yeah, I think that you could look at the influence of horror film, because in the early ‘80s there was this need to stock the shelves. Horror films were cheap to make, and so they were filling those shelves. And so sort of this symbiotic relationship where these young filmmakers, or soon-to-be young filmmakers, they go into the video store, and there was horror everywhere around them. And you know what? Those horror movies taught them how to make films, because they weren't just horror films, they were low-budget movies. And these guys learned low-budget movies. So you could say that was a direct influence.

You're talking about sort of the connection between economics and aesthetics here. To what extent did the video store provide some of the economic foundation of the indie film?

We've got Ted Hope, who's at Amazon Home Studios now. He said that without the video store, you wouldn't have had an American [independent] film movement. And you know, you can look at the biggest guys, Stephen Soderbergh, Quentin Tarantino. Both those guys got their first money from video companies that were originally created to just make straight-to-video films or to work on ancillary projects [such as] LIVE Entertainment, which worked with Tarantino for his first film, “Reservoir Dogs” and RCA, Columbia, which worked with Steven Soderbergh for his first film, “Sex, Lies, and Videotape.”

Those companies, for the first time, they started putting money into new films. And it just so happens that they realized that they didn't just have to put money into crap, they could actually put money into dramas that, you know, ended up being so important.

What about the fact that video rentals provided some revenue later along the line for studios or distributors? Did that have any impact?

Definitely. You have Ira Deutchman in the book who was a major figure in the independent film movement, because he was running Fine Line. And he speaks to how every single film those guys would make, every independent film, would go through the same economic equation. And one of the most important factors was to figure out how the movie would do on video, and because it was the most clear. People wouldn't know — it was very hard to get the math right on how a movie would do at the box office. You know, you can put as much money as you can into marketing a film. But often you wouldn't know.

So basically there was a clear economic model for the video store, and it helped these companies do that.

Yeah, I mean the one thing that pretty much every filmmaker said at some point during my interview was that whether it was two films in or five films in of their careers, they found themselves going to the video store and when they found their name on the director's [section] with their own shelf, they were just so moved by it. They felt like they had made it, whether it was Allison Anders or Nicole Holofcener.

Darren Aronofsky has a great story — when he first saw his name on the shelf at Kim's Video in New York, he took a picture. And his name starting with an “A,” he sent the picture to his buddy Wes Anderson, whose name also starts with an “A.” So he sent it to him because, “Look we've made it, we've both got shelves.” And you know, I really can't see Scorsese doing that, or Kurosawa doing that.

But that kind of says it all, right there. They usually don't put the names of the directors, especially like Darren Aronofsky, on the marquee in front of the theater. But they do give it to them in the video store. And also, as you know, it’s about that sense of being an auteur. When you have your name on a shelf, its like you didn't just make one movie but you are worth your work. Your body of work is worth a shelf.

There's a cliché clerk persona which is a movie snob who's kind of a jerk, who, you know, if you go up to the person and ask them for, you know, the latest Tom Hanks movie, they're not even going to look at you. But you know, I think it’s a cliché and some clichés have some truth to them.

And you know, I've got people in the book who represent for them – Morgan Spurlock, that was his experience when he went to Kim's. He felt like he was, you know, treated like a little flea. Because he asked for new releases at Kim's. We all know now that that's not something you should do, but you know, that's what he did. So you know, I think there's truth to that, but more, I think we all know that clerk who we loved, who we would always go to. And so, you know, wouldn't it be incredible to have met with someone who experienced having Quentin Tarantino as a clerk?

And I was psyched to hear [Tarnatino] kind of do a replay of what he was like, how he would recommend an Eric Rohmer film to someone who doesn't know Eric Rohmer's work. And you know, it just makes sense, like it’s that personal touch.

What ended up killing the video store, especially the mom and pop independent video store?

It was a process, you know. Technology has a way of killing itself over time. Everything has its own statute of limitations, I guess, or, I guess, its obsolescence. If we time the video store from 1980 to 2005, I think that's when the reign of the era of the video store was in place. You know, first Blockbuster, a big corporation rose up in the ‘80s and ‘90s, and then it was too hard for the moms and pops to compete. The only way that the moms and pops could compete with Blockbusters was through specification, like being a really great cool video store.

But okay, so first they couldn't compete with Blockbuster – not only their rates, but also the promise that Blockbuster gave to people which is that they would have that movie in stock.

Because people got frustrated. You go to a mom and pop, they only have maybe five copies of “Field of Dreams,” and so you might get there, and they may not have it. But if you go to Blockbuster you'd be assured they’d have it. So that was the first death knell.

And then DVDs came out in '97, and soon Netflix and streaming and basically, convenience. And streaming has killed the rest of the video stores. And man, these guys are dying by the day. I've been trying to keep track of like, whether the remaining video stores, and I keep on like – I hear about one, and then I find out it just, you know, went down like a month or two ago.