Ted Cruz can't lose: Why the brewing Planned Parenthood shutdown fight can only help him

Kelly Ayotte asks Ted Cruz what his plan for a government shutdown is. It's simple: Blame Republicans when it fails 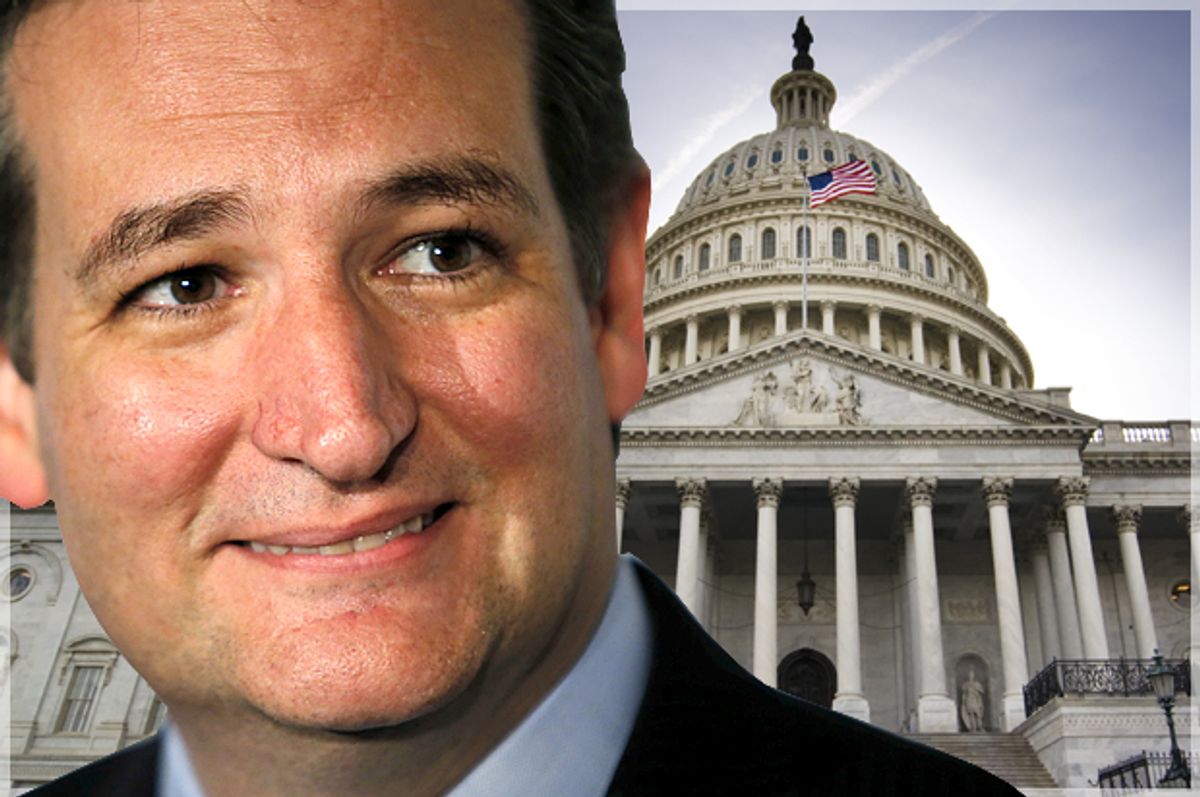 We’re now just a few short days from yet another government shutdown and, once again, Sen. Ted Cruz is helping to nudge the Republican Party over the political cliff. The GOP and the conservative movement are grinding through an internecine war over what to do in response to a series of “sting” videos claiming (without evidence) that Planned Parenthood engages in the illegal trafficking of tissues obtained from aborted fetuses. Hard-line conservatives like Cruz are pushing for Republicans in Congress to strip Planned Parenthood of its federal funding by any means necessary, including a government shutdown. Other Republicans are not willing to go that far, recognizing the futility and political peril of a shutdown.

One of those anti-shutdown Republicans is Sen. Kelly Ayotte of New Hampshire, who is up for reelection in her blue state this cycle. She’s written a letter to Cruz, asking her Senate colleague, a 2016 White House hopeful, to explain why, exactly, he thinks a shutdown over Planned Parenthood will work when the Democrats retain filibuster power, President Obama’s veto looms beyond that, and the 2013 shutdown over Obamacare failed so spectacularly:

Given the challenges we face at home and abroad, I oppose risking a government shutdown, particularly when it appears there is no chance of achieving a successful result. Nevertheless, as I understand it, you have been circulating a letter to our colleagues asking them to oppose any government funding bill that continues to authorize funding for Planned Parenthood.

And if for some reason there were 60 votes, how do we get 67 votes in the Senate to overcome a Presidential veto?

The point Ayotte is making is that there is no strategy. Her blunt assessment of the insurmountable obstacles standing between the Republican Congress and a defunded Planned Parenthood make that inescapably clear. But that doesn’t mean Cruz isn’t going to emerge victorious from this fight. In fact, in his own mind he’s already won.

There is no actual substantive ideological difference among the Republicans fighting over Planned Parenthood and government funding. They all oppose abortion rights and they would all prefer to see the women’s health organization stripped of its federal funding. Where they differ is a question of tactics. Republican leaders like Mitch McConnell want to put the Planned Parenthood question off to another time because they understand that fighting this battle now only jeopardizes the GOP’s chances of taking the White House and holding the Senate, which are necessary conditions to effectively attacking the group’s funding stream. Hardcore conservatives like the House Freedom Caucus want to fight now because they’re angry, and when you’re angry the only proper thing to do is to punch something over and over, even if it’s your own face.

But Republican politics has devolved into a series of elaborate pageants intended to demonstrate the superior purity of one’s conservative beliefs, and so a disagreement over tactics has exploded into a do-or-die struggle for the very soul of the GOP. If you’re not willing to shut down the government over Planned Parenthood, the extremists argue, then you are branded a heretic to the true conservative cause.

Ted Cruz is nursing along this ridiculous political dynamic for the benefit of his White House campaign. According to the latest CNN polling, self-identified Republicans are divided on the question of a government shutdown: 48 percent want the government to be funded, while 44 percent prioritized defunding Planned Parenthood. Cruz’s whole 2016 strategy revolves around mobilizing conservatives and rallying them to his banner. He has his greedy eyes on that 44 percent, and he’ll have an argument to make to them regardless of how the shutdown fight plays out.

If Republican leaders blow off the hard-line conservatives and work with Democrats to keep the government’s lights on, Cruz will argue that the Republican base has been sold out by its leaders in Washington and they should vote for him because he’ll fight. If the hard-line conservatives succeed in cowing the leadership in one or both houses of Congress and the government tips into shutdown, the GOP will sustain political damage until the leadership caves and works with the Democrats to turn the lights back on, and Cruz will argue to the base that its leaders quit too easily and they should vote for him because he’ll never quit. His strategy isn’t to win; he’s fully anticipating the 100-percent likelihood that the government and Planned Parenthood will be funded at some point very soon.

That gets us back to Ayotte demanding to know what Cruz’s strategy is for making the Planned Parenthood shutdown work. Cruz doesn’t have a strategy because he doesn’t need one – all he needs are people to blame when it fails.