The pontiff has a number of allies in the investment community. To topple Big Oil, he has his work cut out for him 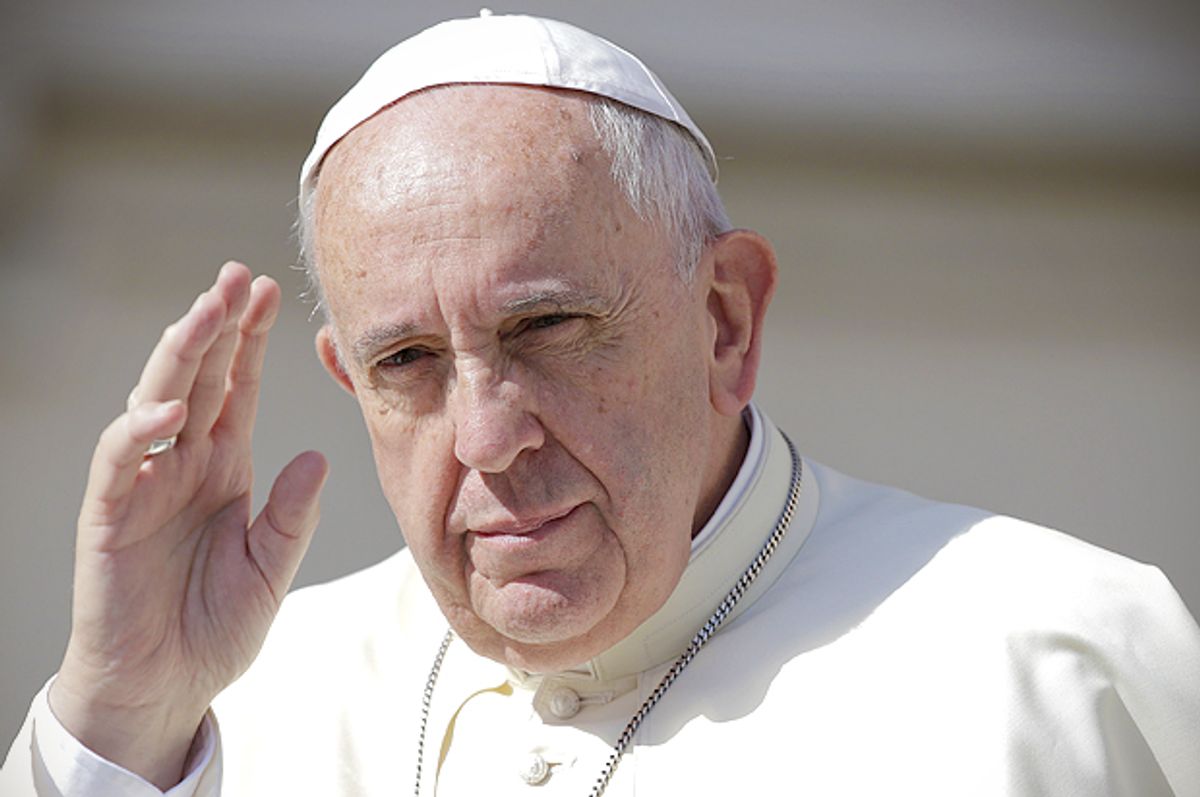 For most of us in the cities on Pope Francis’ upcoming U.S. tour, the major concern is traffic congestion. For fossil fuel executives, look out.

The Pope closed out his blockbuster, 180-page encyclical on climate change in May by appealing to God to “Enlighten those who possess power and money that they may avoid the sin of indifference, that they may love the common good, advance the weak, and care for this world in which we live.”

Sound like anybody you know, Rex Tillerson? The ExxonMobil CEO is notoriously obstinate in his opposition to Pope Francis’ call for a shift from intensive fossil fuel use to alternatives like solar and wind. In fact, when a Catholic priest and shareholder activist urged investment in renewables at the company’s annual meeting this year, Tillerson openly mocked him.

Enlightening Tillerson and all the other wealthy and powerful U.S. fossil fuel executives who are just as dismissive of climate change will be a challenge of biblical proportions. A new report I’ve just co-authored for the Institute for Policy Studies sheds light on just one of the major obstacles: our CEO pay system. In 2015, corporate boards are still designing compensation packages that give oil, gas and coal executives zero personal incentive to diversify their companies’ portfolios to include renewable energy sources.

It’s pretty much a “pay more to drill more” system, and it’s been enormously lucrative. While shoving the costs of their climate-damaging activities on the rest of us, the 30 top fossil fuel CEOs made $14.7 million last year on average. Tillerson, with $33 million, made well more than double the S&P 500 average of $13.5 million.

One of the most perverse aspects of the fossil fuel executive pay system is that it rewards CEOs at bonus time for expanding their carbon reserves. Never mind that if the world’s largest fossil fuel companies were to burn all the oil, coal and gas they already own, it would cause irreversible climate disaster, everything from extreme flooding and drought to a significant rise in sea level.

And it doesn’t matter what’s in those reserves. At Marathon Oil, CEO Lee Tillman won an “above-target” bonus of $1.2 million in 2014, in part for expanding reserves of U.S. oil shale, the fracking of which poses well-documented environmental risks, including water contamination and even earthquakes.

CEOs are also rewarded for project execution, regardless of the environmental impacts. At ExxonMobil, the board justified high payouts to Tillerson and other execs in 2014 in part because they’d “successfully drilled” their first well in the Russian Arctic, even though their Russian joint venture partner has a dismal environmental record and the project was eventually scrapped.

Pope Francis has a growing number of allies in the investment community who fear climate change-dismissive CEOs are taking their firms down a risky financial path. If these firms don’t diversify, they could wind up stuck with massive quantities of devalued “stranded assets.” The coal industry is already imploding as a result of climate regulations and other factors that have reduced demand.

The Pope will need all the help he can get to turn this bunch around. A just-released investigation by Inside Climate News reveals that ExxonMobil executives were warned of fossil fuels’ role in creating devastating climate change in the late 1970s, long before most of the rest of the world. How did they respond? By devising strategies to block climate solutions.

Changing Rex Tillerson’s personal reward system won’t be enough to prevent climate catastrophe. But as long as fossil fuel executives are insulated from the crisis they’ve helped create, we’ll all remain at risk.