The government is hurtling towards yet another shutdown this fall. The man with the most to gain: Ted Cruz 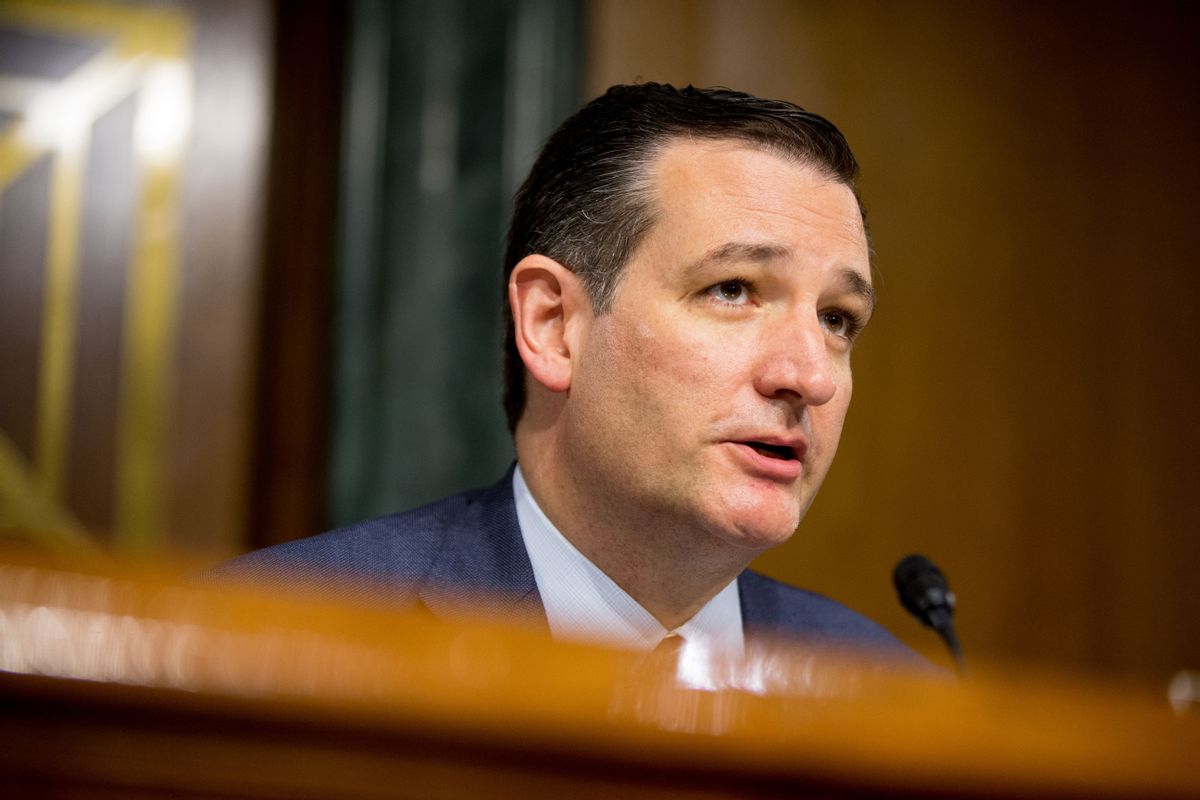 One of the more persistent misapprehensions among certain pundits is the idea that Republicans will not shut down the government because it's bad for business. By business, they mean politics, of course, the business of the government. And as with so many beltway tropes, they say this because they harken back to dark ages of the government shutdown of 1995, in which the myth grew up that this was the reason Clinton won re-election the following year.

Whether or not that's an accurate view of that period's political dynamic is arguable, but it certainly has nothing to do with the government shutdowns of our current era. Sure the Republican leadership doesn't like government shutdowns. They're risky. But as far as Republican voters are concerned, this is a winning tactic. After all, they won big in 2014 after ostentatiously shutting down the government and creating havoc with the budget over the course of several years.

The conventional wisdom says that these GOP shutdowns in off-years work a lot better than they would in a presidential year due to the Republican turn out advantage in mid-terms. And it's fairly certain that the disastrous Obamacare website rollout stepped on the story of Republican overreach in 2013. Nonetheless the right wing is convinced that this is a big winner for them -- and frankly, even if it isn't, they don't care. To people who believe in the marrow of their bones that government is a bad actor designed to make their lives miserable, shutting it down, even temporarily, is a good thing in and of itself. And who knows? It might just make the other side break one of these days.

So, here we are in the fall, once again, facing a government shutdown. The committees have not done their jobs, there is no budget, and the expiration of the current budget appropriations is almost upon us. In normal times the congress would simply pass a continuing resolution and get back to work to run the government. Instead, we are facing another "showdown".

The major issue this round is the emotional issue of Planned Parenthood funding over of the doctored tapes that Carly Fiorina so colorfully lied about in the GOP debates last week. With social conservatives smarting from their defeat on gay marriage, it seems they are redoubling their efforts to stop abortion and contraception, and the far right members of the GOP coalition are happy to oblige for all the reasons I just outlined.

Longtime congressional observer Stan Collender put the odds at 75 percent that it was going to happen, explaining in Politico that the ongoing dysfunction is most likely an insurmountable challenge for leaders John Boehner and Mitch McConnell to manage successfully. He agrees that the Planned Parenthood issue provides the most drama and may serve as the main excuse for the deadlock. The Senate Democrats blocked a so-called "fetal pain" bill on Tuesday morning which was a largely symbolic appeasement offering to the hardcore anti-choice Republicans so they could hit the trail claiming they are heroic rescuers of fetuses everywhere. But that's not the end of it. McConnell announced plans to bring up a stand-alone vote to defund Planned Parenthood, lugubriously proclaiming "I know Democrats have relied on Planned Parenthood as a political ally, but they must be moved by the horrifying images we’ve seen. Can they not resolve to protect women’s health instead of powerful political friends?"

(MSNBC's Luke Russert attributed this comment to McConnell's desire to show off for the Pope and signal his seriousness about the issue to Ted Cruz, and maybe it's just that absurd.)

Meanwhile, a rump group of House Republicans are demanding that any spending bill defund the women's health group, which means Boehner must have Democratic votes to pass a funding bill and Democrats are holding very firm. That issue will play itself out over the next weeks, with Boehner's job being once more on the line.

If this all sounds ridiculous, you aren't alone. Even GOP senators are wondering about the end game:

Anti-choice activists and other grassroots "strategists" are convinced that they can make people believe it would be President Obama who is "shutting down the government," which is fatuous in the extreme. People will know who is doing the shutting down. After all, Republicans are famous for it. So this Planned Parenthood confrontation could be a big problem. But it isn't the only one. Collander points out there are a number of other, less exciting issues that are feeding into this possible showdown:

To demonstrate that they would not agree to a budget deal without increases for both, earlier this year, Democrats prevented the defense appropriation from being debated on the Senate floor until they could be certain that the military increases that Republicans wanted would be matched by similar increases for domestic agencies. When the GOP refused, this year’s whole appropriations process came to an immediate halt. So far, nothing has changed.

This goes back to the Sequestration Act of 2013 which was one of the worst failed gambits in legislative history. Here we are, still fighting over draconian cuts that were allegedly designed to bring both sides to the bargaining table and ended up driving everyone further apart. The real people it has ended up hurting seem almost incidental to the problem. We can only hope that at some point, someone doesn't decide that the military increases which both sides agree on are enough to form an agreement to keep the government from shutting down. When that happens, the sequestration game will be over and the Republicans will take a well-deserved victory lap.

And then there is the Iran nuclear disarmament deal which is apparently driving the GOP even crazier than they already had been. There is talk of using the continuing resolution to continue to flail uselessly on the issue by preventing the State department from spending any money on implementation -- yet another show for the folks back home that will go nowhere.

So social conservatives, fiscal scolds and military hawks all have reasons to pursue their own agendas with a potential government shutdown, but there is one person whose agenda is particularly well served by all three: Senator Ted Cruz. He's the  Republican official calling for a government shutdown most vociferously, using pretty much any issue he can lay his hands on. Like all far-right Republicans, he's unalterably opposed to any hike in domestic spending for any reason, so if the Democrats insist on doing that as the price of a continuing resolution, he'd be happy to see the government shut down. But he's at the head of the team that's agitating for a showdown over Planned Parenthood and has come up with a novel path for shutting down over Iran. The Hill reported yesterday:

"I believe what Congress should do is a pass a continuing resolution that funds the government, but that provides two conditions," he told reporters on Tuesday. "Number one, it does not give taxpayer funds to a private organization — Planned Parenthood — that is under multiple criminal investigations. Number two, it uses the power of the purse to force this administration to hand over the Iranian side deals."

The administration says they don't have the side deals to hand over, but even if they did, it's highly unlikely that Ted Cruz would be a proper person with whom to entrust them, seeing as he thinks the deal has been struck  by the world's leading financier of radical Islamic terrorism, President Obama.

My colleague Simon Maloy speculated yesterday that this was all part of Cruz's presidential campaign strategy, in which he would ostentatiously push for the Republican congressional majority to confront the president over these issues of importance to the GOP base he's trying to attract to his candidacy. And in a clever bit of political jiujitsu, he will blame the Republicans in Washington when it fails, setting himself up as the true believer willing to fight the power.

It appears Maloy is right. According to The Hill:

The spending bill isn't the first time Cruz has tussled with the leadership of his own party. The Texas Republican also suggested during a blistering floor speech earlier this year that McConnell lied about a deal on reauthorizing the Export-Import Bank.

The rhetorical battles play into the anti-Washington theme at the core of Cruz's presidential campaign. He doubled down on that Tuesday, saying that "the position of Republican leadership boils down to this: They will support 100 percent of the priorities of Democrats."

Setting up your own party to fail so you can blame them for it is a bold move, no doubt about. But in a campaign in which all the frontrunners are outsiders running against Washington, this is perhaps the only way for a sitting Senator to position himself as one of them. And it's certainly possible that the Republican primary electorate will view him as a hero for leading the charge against the loathed DC Republican elite.  But they could just as easily see him as part of the problem. After all, that would be the truth.

Nobody knows if the government will shut down this fall. There are a lot of moving parts and they are changing every day. But whatever happens, Ted Cruz will be in the middle of it trying to prove to the GOP primary electorate that he is the right wing champion of their dreams. As long as Donald Trump doesn't say something crazy that week they might even notice.