The Donald is not a riddle, a monster or a mystery. He's merely a product of our broken political culture 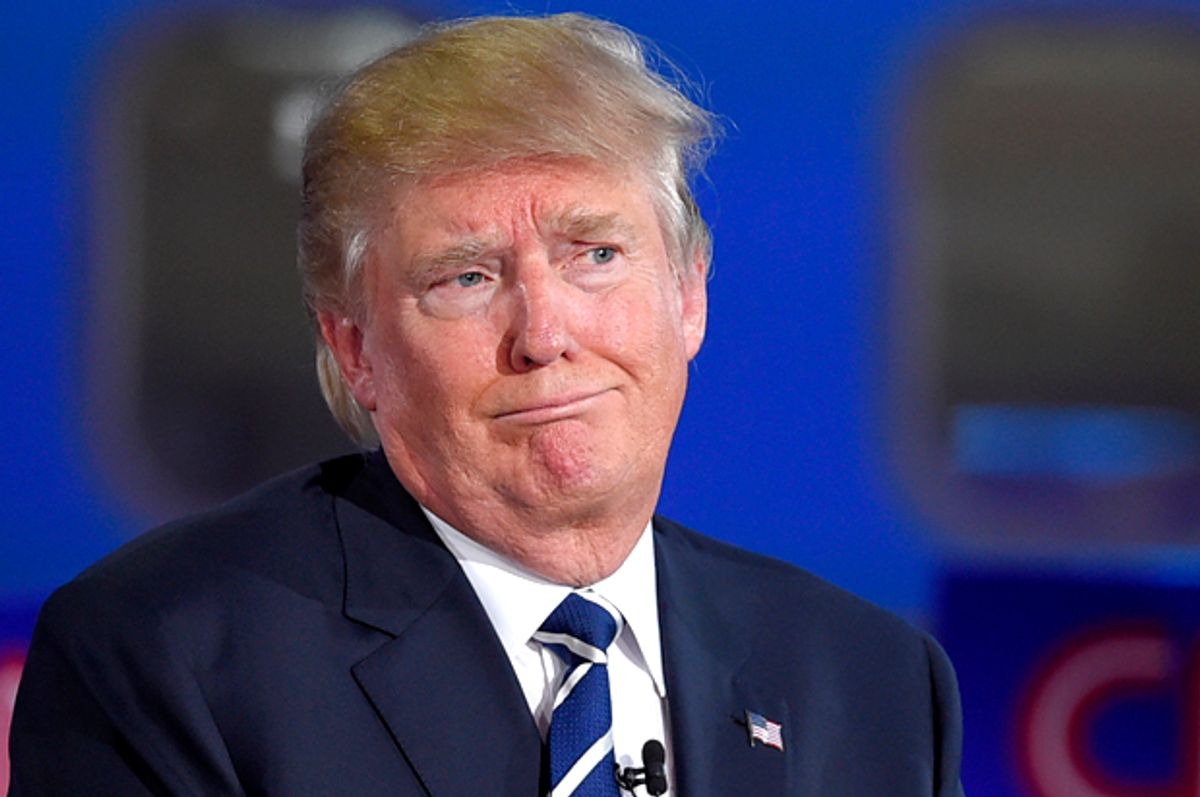 Donald Trump is not a riddle, a monster or a mystery. Trump has many antecedents in American history, and his ascendance was the wholly predictable result of a broken political culture.

For progressives and those others worried about America’s deep political rot, “Trumpmania” represents a supreme and rare teachable moment, one that exposes the racism, authoritarianism, and socio-political anxieties of white movement conservatives in the post civil rights era and the age of Obama.

In many ways, Donald Trump has written a virtual textbook about the worst aspects of present-day, right-wing American politics. This book, if ever published, would include the following important concepts.

1. White identity politics. Donald Trump has been endorsed by prominent white supremacists and white nationalists as their chosen candidate.

(Political socialization begins in the home. According to recently discovered news reports from 1927, Trump’s father was likely at least a sympathizer with, if not a member, of the Ku Klux Klan.) From the end of the Civil Rights Movement onward, the Republican Party has used a strategy of white grievance mongering known as the Southern Strategy to mobilize its voters.

As a complement to the Southern Strategy, since the election of Barack Obama, the right-wing Fox News hate media has obsessively channeled racist narratives such as “birtherism,” “black crime,” and most recently the lie that the Black Lives Matter movement is an anti-white hate group.

The Republican base is almost entirely white, increasingly alienated and upset about the perceived decline in white people’s political and social power, and feeling under siege in a country that is becoming more racially diverse. Donald Trump has combined the old fashioned racism of overt white supremacists with the modern white racist “dog whistle” politics of the Republican Party. He is the new face of American white identity politics in the 21st century.

2. Right-wing producerism. Donald Trump has presented himself as an “everyman” who can speak for the “regular” people who feel alienated and frustrated by the Washington D.C. “insiders” who do not look out for the “little guy.” This is the crudest form of populist politics. Trump then aims his supporters’ anger towards an enemy: immigrants from Mexico who are coming to American to supposedly steal jobs while they rape and murder white women; or the Chinese he presents as a stereotypical devious and sneaky “yellow peril” Asian foe that only Trump can outmaneuver and conquer.

In this script, Donald Trump then promises to protect benefits like Social Security and health care, while creating a more fair tax code for “hardworking” (white) Americans who are under siege by “parasites”, i.e. the poor on one extreme, and the corporate monied classes on the other. Trump’s “makers and takers” language is then mated with hostility to some type of Other in order to excite and mobilize conservatives via right-wing populist zeal.

3. Herrenvolk politics (a system in which minorities are disenfranchised while the ethnic majority holds sway). Donald Trump is using white identity politics to win supporters. Combining overt and subtle racism, part of Trump’s appeal is that he promises to protect the resources and democratic rights of white Americans against their supposed exploitation and theft by non-whites. This is one of the foundations of right-wing producerism.

In the right-wing conservative imagination, real Americans are “hard working,” “Christian” and “white.” Their rights and privileges are to be protected at all costs against lazy black and brown people who are welfare queens, thugs or "illegal" immigrants. The social safety net—while torn at by the 1 percent and right-wing plutocrats—exists to serve white people and “real Americans” before any other group.  As seen in other segregated societies throughout history, the State exists to provide support and service to the “ingroup” while the “outgroup” is denied the same benefits and rights. This is the core of Donald Trump’s herrenvolk appeal.

4. Social dominance behavior. Donald Trump’s supporters are drawn from the same core of aggrieved and angry white voters who comprise the Tea Party wing of the GOP. Research on this group shows that they are racially resentful, fearful of social change, hostile to people who are not like them, believe in natural hierarchies and order, seek out strong leaders, are deferent to authority, and exhibit a type of “bullying politics.” In many ways, Trumpmania is a frightening reflection of the authoritarian values that have infected American conservatives.

5. Know-Nothings. Donald Trump’s nativist, xenophobic and racist politics are the latest version of the 19th century American political movement known as the Know-Nothings. The Know-Nothings 1856 party platform included demands that “Americans must rule America; and to this end native-born citizens should be selected for all state, federal and municipal offices of government employment, in preference to all others…”

This is not unlike Trump’s ginning up of white anxiety and violence towards non-white immigrants.

6. The strong father and “manliness." Donald Trump repeatedly talks about “strength” while slurring Barack Obama and other political enemies as “weak” or as “pansies.”

Trump is also not limited by what the right-wing sees as “weak” “liberal” notions of “political correctness” as he insults women and throws verbal bombs at any person who disagrees with him.

Right-wing ideologues and authoritarians idolize the strong father figure, one who often uses punitive means of discipline to maintain high levels of control over his wife and children. (The right-wing’s latest slur, "cuckservative," also reflects their anxieties about white masculinity, race, and sexual potency.)

Donald Trump uses gendered language because America’s political class often defaults to a framework where the Democrats are framed as being weak, feminine or too intellectual. By comparison, the Republicans are depicted as strong, manly and decisive.

Donald Trump is playing the role of strongman for the right-wing ideologues and movement conservatives who are aroused by such a figure because the latter fulfills a psychological need for security and protection in a world they view as dangerous and changing too rapidly. His name-calling, bullying swagger, and indifference to norms of comportment and reasonable behavior are central to Trump’s popularity.

Reality television shows are scripted. The genre is wildly popular among American viewers because it is part of an “empire of illusion” that distracts and confuses the public while allowing them to live out their fantasies and wish fulfillment.

In keeping with that dynamic, Trump’s obsessions with “ratings” and public opinion polls that supposedly show his “popularity” are the result of a broken civic and moral culture that equates “likes” on Facebook or “votes” on American Idol with substantive measures of virtue or human value.

Ultimately, Donald Trump is using his background as a reality TV show host, business celebrity, and fan of professional wrestling to engage in a type of ridiculous and exaggerated performance art that mocks the notion of normal politics. Because Trump is not interested in normal politics—Trump is reality TV mixed with professional wrestling—he is relatively immune from derailment or substantive engagement by the news media or his political rivals in the Republican Party.

8. Conspiracy theories and the paranoid style. Donald Trump was one of the most prominent advocates of “Birtherism”—a belief that Barack Obama, the United States’ first black president, was somehow not eligible for the office because he is not a “real” citizen.

This is an absurdly racist claim; nevertheless it is one that is still believed by 66 percent of Trump supporters and 45 percent of Republicans. Birtherism was the first of many conspiracy theories that would be invented by the right-wing media in the age of Obama. Obsessions about Planned Parenthood, ACORN and Benghazi would follow. These delusions are part of a long pattern of right-wing paranoia that Richard Hofstadter detailed in his landmark 1964 essay, “The Paranoid Style in American Politics.”

The right-wing media and the Republican Party’s embrace of conspiracy theories and paranoid delusions contribute to a broken political system because too much time is spent on the absurd instead of doing the work of real governance. The conspiracy fantasies of Donald Trump and the American right-wing constitute an alternative reality that is immune from facts. Consequently, these beliefs function as a type of religious cult where faith—what is a belief that cannot be proven by ordinary means—is substituted for empirical reality.

Donald Trump’s “birtherism” alternate reality is compelling and exciting for those who believe in it. Such conspiranoid delusions are dangerous because they create extreme political polarization, a political system that cannot fulfill its basic functions, encourage violence, and tear at the common beliefs and values that create a sense of political legitimacy and community in the United States.

Informed citizens can create positive political change. An ignorant public can be easily swayed, manipulated, and duped to act against their self-interest and the Common Good.

Donald Trump is a charismatic figure who embodies the fears, hopes, and anxieties of an aggrieved and frustrated white America. He is the hero they are desperate for. He is a product of a particular coincidence of broken politics, an irresponsible Fox News echo chamber media, and a scared and racially resentful public.