Larry Wilmore wants to know if Ahmed Mohamed feels like a badass: "Doesn't it give you a little street cred"?

"I knew I was innocent and if I had to take it to court I would win," Mohamed said in an interview with Wilmore 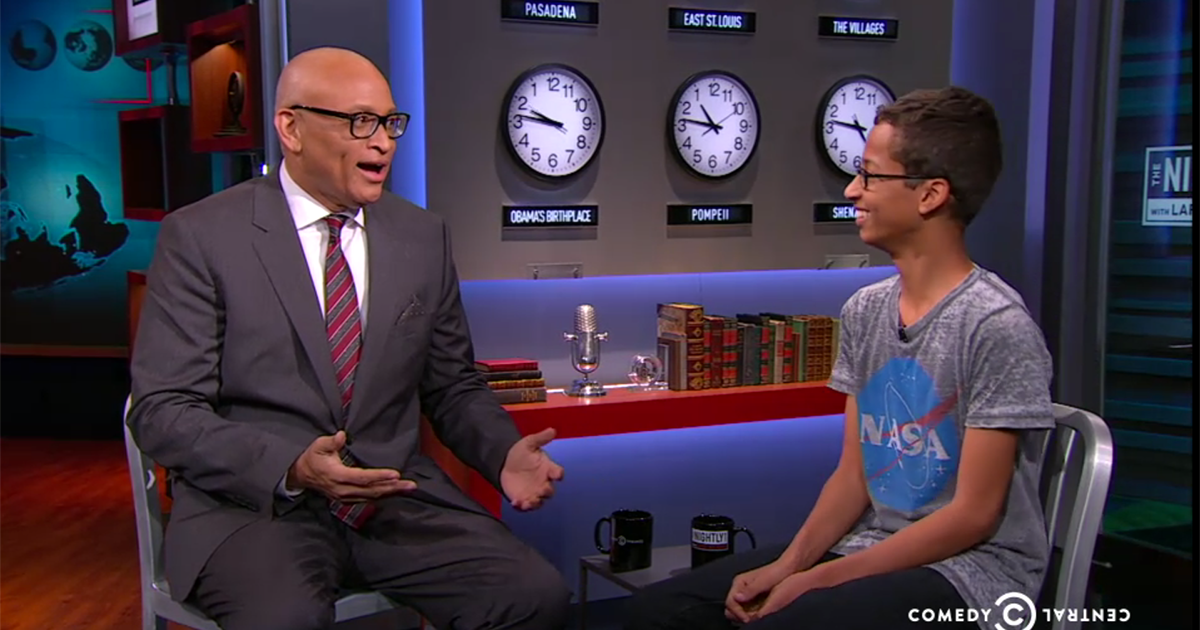 Ahmed Mohamed, the 14-year-old Texas student who was arrested at school earlier this month when his principal thought his homemade clock was a bomb, sat down with Larry Wilmore last night.

Mohamed came out on stage to a standing ovation clad in his signature NASA t-shirt that has now become nerd-chic, and sat in front of a wall of clocks that Wilmore assured his teachers back home were indeed, just clocks.

"How long did it take you to build that bomb?" Wilmore asked.

Mohamed said he wanted to build the clock because he'd never done anything like that before. "It's really simple to me" Mohamed said. "Because I've built more stuff that's really complicated. . . like CPUs, soldering them. But a clock was simple and some of the parts were scrap. . .so that's how it was easier."

Wilmore got Mohamed to admit that it was "kind of cool" to get arrested. "Doesn't it give you a little street cred?"

"The only reason I felt cool about it was because I knew I was innocent and if I had to take it to court I would win," Mohamed said.

Wilmore gave an emotional appeal last week to the Irving, TX, police when the story about Ahmed Mohamed first broke.

"This story’s a gut punch, man" Wilmore said. "I was a nerd. This kid looks kind of like me. Actually, I looked way nerdier than Ahmed. Ahmed could kick young Larry’s ass, to be honest."

Watch Wilmore's interview with Mohamed below: