Yogi Berra helped me love and let go of my father

"I’m at Yankee Stadium, where the threads of my life remain connected" 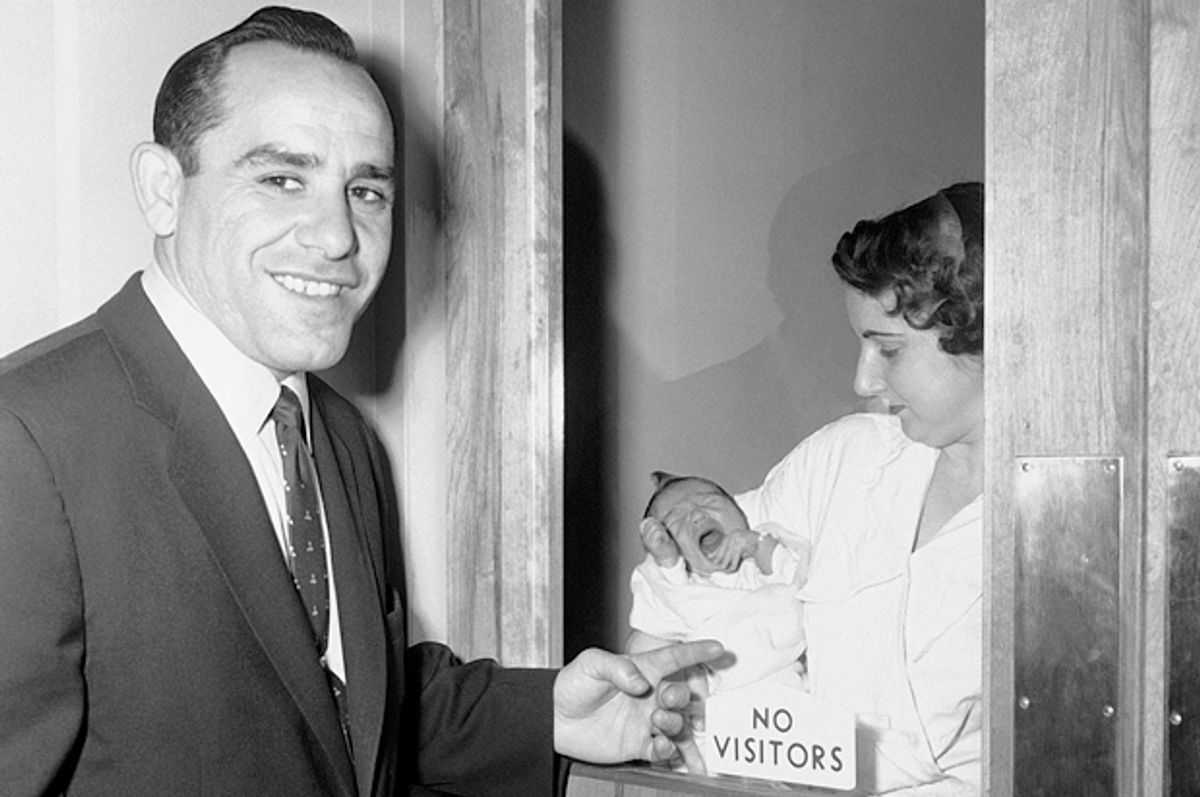 The question I usually get is, if you and your dad were such big Yankee fans how come you never went to the games?

It’s a fair question, one I’ve shied from answering over the years. The truth is that Dad, though born and bred in New York City, didn’t like crowds. Trekking from our apartment in Manhattan to Yankee Stadium in the Bronx was unappealing.  He preferred to watch the games on Channel 11, or listen to the play-by-play on the radio while sitting outside on our patio on sunny summer weekends, immersed in the crossword, or talking to me. Mostly about baseball. So while Dad and I spent endless hours watching and listening to the Yankees, I exited childhood without ever having gone to a game with him.

These were the '70s, and early '80s. The Yankees ranged between good and great, and there was never a shortage of Yankee topics to chew on. How much ground could Mickey Rivers cover in center field?  How good was Oscar Gamble’s home run-to-hit ratio?  It was through this Yankees banter that my dad and I got acquainted – how we sized each other up, father and son. When my dad would gauge the boy I was, and the man I was becoming.

Often, there was silence between us. Sometimes, especially during the bumpy arc of my adolescent years, he would offer direction – with a few well-chosen words, or even a glance.  And then the conversation would return to baseball: You know, Rickey Henderson is going to drop a fly ball one of these days if he continues to nonchalant it with the glove.

I knew something was up then, when, early in the summer of 1986, Dad knocked on my bedroom door and announced he’d gotten us tickets to a Yankee game. I had just returned home for summer break following my freshman year in college.  Dad had been diagnosed with cancer the year before as I was graduating high school. It wasn’t long after his first surgery that I packed up and headed off to college, to start my life.  I had made some questionable decisions that first year away. Dad had sent me a few letters that year, I remember, asking me, always gently, to examine my choices.

The air in my bedroom felt thick, as Dad came in to tell me about the tickets. Detroit Tigers, July 1, on the first baseline. “That’s great,” I said.  He seemed sad, as he filled in the details. I was nervous.  My dad, never robust, looked thin after a year of cancer treatments. If he didn’t have the strength for Yankee Stadium before….

July arrived. Dad and I fought the crowds out to the Stadium. We found our seats, and ate a couple of hot dogs. As the night went on, the Yankees built a lead.  But then Dave Righetti, the Yankees’ usually reliable ace, gave up two runs in the top of the ninth, tying the game at 4. A tense silence settled on the stadium. Mike Easler, the veteran outfielder, struck out to end the Yankees’ bottom of the ninth.  We were headed to extra innings.

I looked over at Dad, as the Yankees took the field in the top of the tenth. The game was entering its fourth hour. Dad had started slumping a couple innings earlier.  It was a Tuesday night, and though his cancer had been gaining, he had worked a full day, and he was still in his office clothes. I searched his face for confirmation of what I already knew – that he wanted to leave. The truth was, neither of us wanted to stay – if we waited until the end, there would be a logjam at the Subway station, the train would be sweaty and crowded, and we’d get home miserably late. But both of us knew we couldn’t leave.

We turned our attention to the field, looking for a run, any run, to move things along.  Righetti pitched a 1-2-3 tenth. Due up for the Yankees: the bottom of the order.  Butch Wynegar, the catcher, popped out weakly to start the inning. Batting next was Dale Berra, a platoon infielder, and son of Yankees Hall of Famer Yogi Berra.

Yogi had traded for Dale a couple years earlier when Yogi was named the Yankee manager. Prior to joining the Yankees, Dale hadn’t attracted much attention. But playing for his father, he batted a torrid .343. Then Yogi was fired 16 games into the 1985 season. Dale was demoted, and his average plummeted. Entering the game against the Tigers, Dale had been playing sporadically and was batting a lean .242.

Tiger relief pitcher Willie Hernandez stared in at Berra, and started throwing heat.  Berra fell behind early in the count. But Berra, who had already collected two hits that night, was dialed in. He swung hard on a Hernandez payoff pitch, and lifted it deep into the left field bleachers. Berra circled the bases, arms raised. Game over:  Yankees 5, Tigers 4.

Twenty-nine years later, I can still replay in my mind the ball leaving the field, and turning to hug my dad. Dad threw his arms around me and squeezed me hard.

We left our seats and joined the crush of Yankee fans on their march to the subway.  The train was packed, and we stood pressed against the other riders. I kept an eye on Dad as the train lurched south out of the Bronx. When we at last made it through the front door of our apartment, Dad was ashen and moving slowly, and he disappeared into his back bedroom.

The Yankees released Dale Berra just three weeks later. He spent most of the next season kicking around the minor leagues, and retired permanently from baseball the following year. For myself, I knew then I’d never go to another Yankee game with my dad. And I didn’t. He died the following May, a month into the new baseball season.

After my dad’s death, I continued to follow the Yankees closely – not so much out of fealty, but because I loved the team, the geometry of the game. But watching the Yankees, reading the box scores in the paper, became a solitary and then lonely experience.  Something between exile and penance. It was a mediocre time in my life, maybe like the years for Dale Berra after his dad was fired by the Yankees. When the Yankee great Don Mattingly retired years later in 1995, I felt another door close. Mattingly was the last Yankee player my dad would have recognized. The team now would be completely unfamiliar to him. My own life was feeling unfamiliar to me.

Nell never met my dad. But after we married, though a Colorado native, she adopted the Yankees as her own. So have our two children, despite the 1,600 miles separating our home and the New York City apartment where I grew up. On occasion, I’ll watch my children poring over the box scores in the morning paper, and I’ll see myself, so many years and miles removed, at the kitchen table with the sports section open, my dad in his blue cotton robe sitting next to me with his coffee.

My family has already traveled those 1,600 miles to see a game at Yankee Stadium, a lopsided victory over the Tampa Bay Rays. I didn’t want to wait.

There is a perfect moment that plays over in my mind. It’s where the people and things I love converge, and being and feeling matter more than words or actions. I’m at Yankee Stadium, where the threads of my life remain connected, taut.  Dad is there too, and he’s surrounded by Nell and the kids. They’re seeing each other for the first time, and there’s already a playful warmth between them. Few words are exchanged. And the Yankees win.

David London was born and raised in New York City, and now lives in Denver, Colorado, where he is a practicing attorney.