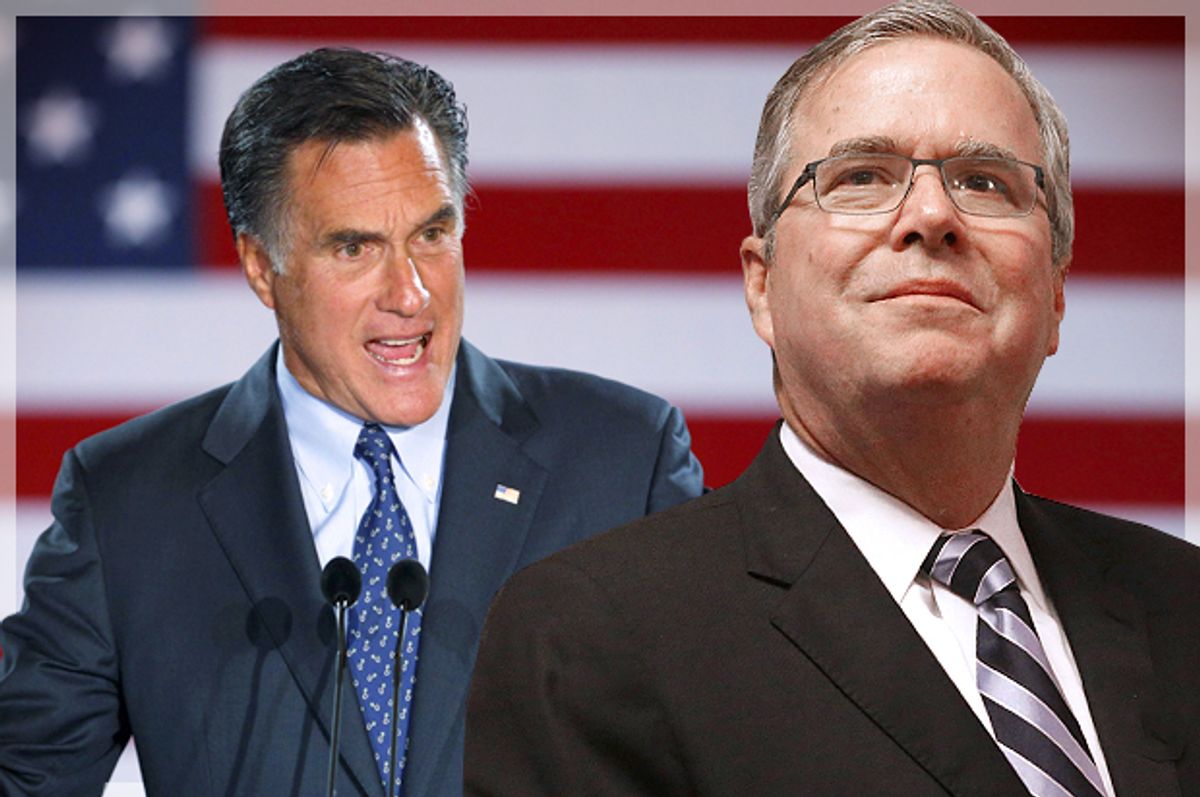 Again, on another historic day when Pope Francis quoted Rev. Martin Luther King Jr. in a speech to Congress, the Catholic convert likewise tried to reach and empathize with African Americans. Only this is how he did it.

At a campaign stop in Mount Pleasant, S.C., a voter noted the event was all-white, and asked Bush how Republicans can appeal to African Americans. At first Bush seemed like the compassionate conservative he’s supposed to be. He touted the African Americans on his leadership team staff, discussed his outreach to black ministers, pivoted to the issue of Latino voters, and offered a feisty defense of speaking Spanish on the campaign trail:

If someone asks me a question in Spanish just for the record, don’t take offense that I answer it in Spanish. It’s not an offense to you, it’s respect for others. You campaign in a way that draws people to your cause. That’s what you do.

So far, so good. Then Bush totally blew it. Turning back to the issue of black voters, he said:

Think about it this way, Republicans get 4-7 percent of the African-American vote…If you double that, you win elections in Ohio, Virginia. And we should make that case, because our message is one of hope and aspiration. It isn’t one of division, "get in line, we’ll take care of you with free stuff." Our message is uplifting, that says, "You can achieve earned success. We’re on your side."

“We’re on your side,” black voters, though we’re not sure you’ve really achieved “earned success.” You’ve been relying a little too much on “free stuff” from Democrats, but we’re here to change that. The level of condescension and negative stereotyping in Bush’s statement is stunning, but not surprising.

After all, Mitt Romney said essentially the same thing – directly to the NAACP, in July of 2012. “Your friends who like Obamacare, you remind them of this: If they want more stuff from government, tell them to go vote for the other guy — more free stuff. But don’t forget nothing is really free.”

Mr. 47 percent didn’t learn from the outrage over his remarks, either. In an election post-mortem, Romney blamed his loss on President Obama giving “gifts” to blacks, women and students in the electorate.

Bush was supposed to be the candidate who renounced that approach to blacks and Latinos. But he’s looking more like Romney all the time, with tone-deaf comments that betray his life of privilege.

On Wednesday, Pope Francis referred to Rev. Martin Luther King Jr.'s famous remark about the U.S. defaulting on its “promissory note” of freedom and equality for African Americans. The next day, Bush insulted black voters by saying that they’ve been lured to the Democratic Party merely by the promise of “free things.”  But Bush differs from Romney in one significant way: At this rate, he’s not likely to be able to insult black voters in the 2016 general election, because he’s not likely to win the GOP nomination.

A personal note: This will be my last post on Salon. After 17 years, I'm leaving to become National Affairs Correspondent for The Nation, still covering the issues I care about. Thanks to my readers for so much support over the years. I'll start at The Nation Oct. 5; see you there, I hope.

Update: Bush campaign communications staffer Allie Brandenberger emailed this comment after this post went up: "The Democrats are creating attacks where they don’t exist because they know their policies have failed the tens of millions stuck in poverty and they fear Jeb’s positive message of expanding opportunity for everyone." She sent along this Bush speech to the National Urban League.