"I’m not coming in with any preconceived notions of where I think my battles should be waged," the new host says 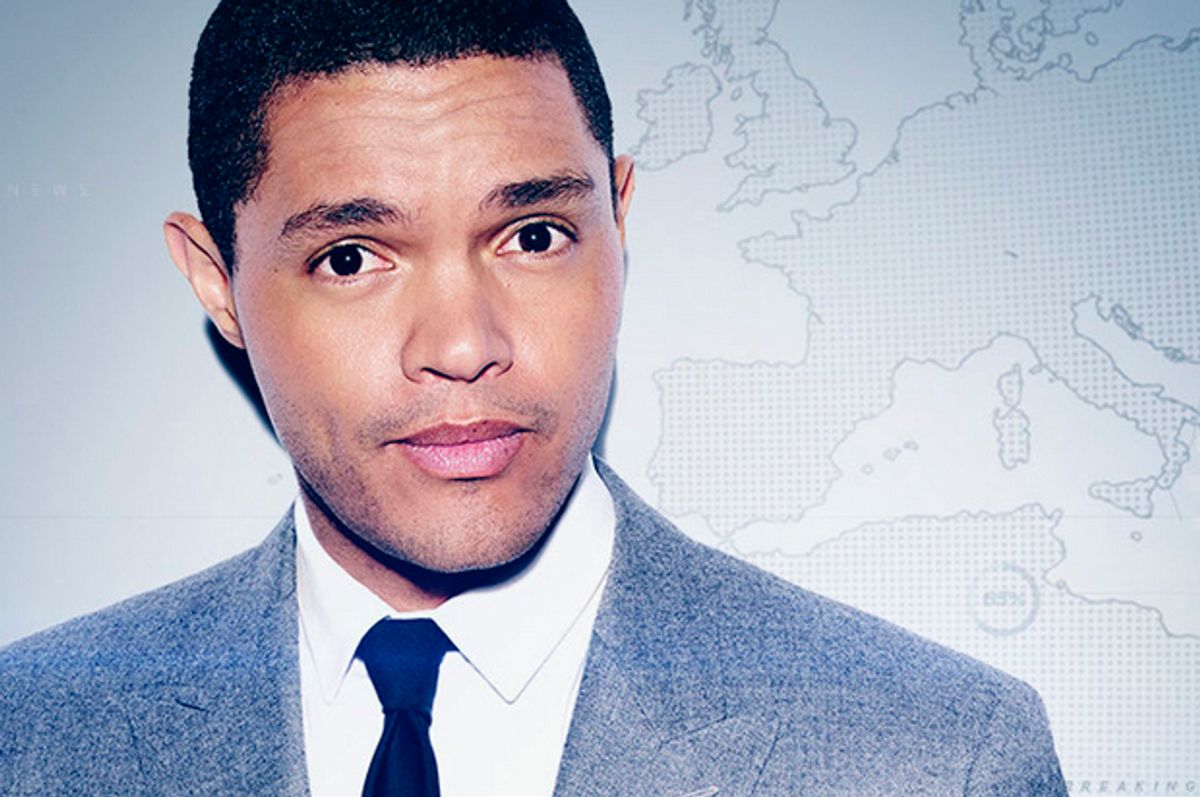 On Friday morning, journalists were granted a sneak peek at the “Daily Show with Trevor Noah,” during which the host answered questions about the regime change and showed off the spiffy new set, which is buried in a warehouse out on the nether-reaches of Hell’s Kitchen. Accented in gray, brown, deep reds and blues, the set evokes his predecessor’s, albeit with some subtle tweaks — which seems to be Noah’s approach to the show itself.

“I look at ‘The Daily Show’ as a beautiful house that I’ve inherited,” Noah explained, looking handsome and at ease as he perched on a director’s chair in front of the anchor desk. “I’m not going to break the house down and start trying to build a house from there; I go ‘this is a beautiful house that’s been there for many years, it’s a landmark.’ So what I’ll try and do is create it into the home of my dreams, using my new family."

"So as time goes on, I’ll be breaking down a wall here, changing a color there, moving a counter over there," he added. "But you will know there’s a new person living in the house, because you’ll be complaining about the noise.”

In terms of guests, Noah seems to be aiming for a familiar mix of entertainers, politicians and cultural figures, although he says his show will include more musical performances. For the first week’s lineup, Noah outlined how each guest was chosen to make a statement about the show's revamped identity: Comedian Kevin Hart (“that’s what the show is, it is a comedy show first and foremost”), Bumble founder Whitney Wolfe (“like myself, a new voice in a space, but from a female side”), musician and Taylor Swift disrupter Ryan Adams (“he’s done in essence what we’ve done here: he’s taken something loved and cherished by many and created a new version”). Republican presidential candidate Chris Christie was picked to confirm that “the show is still going to be political; it’s still going to be American politics."

But it remains to be seen how Noah will deal with the intricacies of the American political system that were his former boss’s bread and butter. Jon Stewart was mired in the system, and the South African-born Noah is much more of an outsider — a viewpoint he intends to use to his advantage in the writers' room. “I also bring in a certain level of ‘did you see this other thing that comes from another place,’ and then we get to talk about that,” he explained. “They get an outsider’s perspective.”

As he reiterated a few times, Noah doesn’t see his learning curve as a disadvantage. Rather, he expects that balancing his fresh eyes with the experienced perspectives of his writers (most of Stewart’s writing staff have stayed on) will provide a new way in to some of the show’s well-trodden topics.

“The fun part is the learning, and I think sometimes transferring that learning into a TV show and giving that to the audience is fantastic, like when you have a child, they learn new things and then you get to relearn it with them,” he added.

Take covering the recent Republican debates: Noah said he and his team worked together to figure out how to stay true to the show’s brand and to his sensibilities simultaneously. “For the writers, they’ve got a history with all of these people," he explained. "I’m watching the debate and someone says something about something one of the politicians did 10, 15 years ago, and they’re like ‘that’s like the time that happened.’ And I’m the person going ‘why is that funny? Who is that person? What is important about that?’"

"What’s great about this is I think we have an opportunity to re-learn these instances," he added. "I come in on a clean slate with a lot of the politicians, a lot of the news media outlets.”

Certainly, Noah lacks the jadedness that was seeping from Stewart's pores by the end of his tenure. He also might not necessarily target the same Fox News and GOP punching bags that Stewart liked to target. Noah rarely watched Fox News while living abroad, and he seems excited now to dig into the conservative slop bucket. “I get to forge my own relationships, I get to discover the person that I will grow to loathe and hate,” he joked. “I’m not coming in with any preconceived notions of where I think my battles should be waged.”

Noah’s childlike naiveté about the U.S. political quagmire may have its charms (and, I suspect, may be more winning for a correspondent than a host); it could also lead to a disconnect between Noah and “The Daily Show’s” politically savvy liberal audience, who might not have the patience to wait for Noah to outgrow his burgeoning “college libertarian phase,” as my colleague Sonia Saraiya dubbed it.

“The joke that happened with myself and Steve [producer Steve Bodow] is we were watching the debate together, and I was complimenting every single thing that Rand Paul said,” Noah said. “Rand Paul said something and I said ‘that sounds great!’ and Steve said, just you wait, he’s going to break your heart. And I was like, ‘I don’t know, seems like a pretty amazing guy to me.’”

While Rand may be the first candidate in Noah’s heart, he seems open to whichever GOP candidates want to step into the ring with him. After saying that he’d love to have Ben Carson on because “it would be a very energetic interview,” he spoke a little bit about Donald Trump, a notoriously slippery interview subject — even Colbert seemed to have a tough time with the blustering candidate when he appeared on "The Late Show" earlier this week.

“Donald Trump is an interesting one, because the truth of the matter is he doesn’t say much,” Noah acknowledged. “Really what we’re doing is enjoying the spectacle of it all. That’s really what we’re doing it, we’re indulging it, and at some point that indulgence may come back to bite us. But we’ll see. Obviously Donald Trump is welcome on the show and I would love to have him on, but the question I would ask myself and the team is, what do we aim to achieve from this? Are we doing this just for entertainment or are we really trying to get answers, are we really trying to go into a political space with these people?”

Noah’s on-the-fly political humor chops got a little test this morning, when Saraiya broke the news mid Q&A that John Boehner was stepping down from his congressional seat, and asked Noah to share some of his failed Boehner jokes with the audience. After demurring that it was probably time for him to step offstage, he lamented the speakers's departure (“That’s sad, I liked him! He cried all the time") and expressed disappointment that he wouldn’t get to show off some of his Boehner material: “They weren’t failed, they were great jokes! That’s the sad thing.”

Still -- perhaps wisely -- Noah chose not to rise to the bait.

“I’m a big fan of thinking before I say or react to anything," he added. “So that’s what we would be doing right now is talking about it and reminiscing on our favorite John Boehner moments, and [the writers] would be taking me back to some I didn’t know of. And we’d figure out a way to go from there.”