Can a thinking person still have faith? My skeptical, honest quest for religious answers

I was a skeptic, until my son and wife got sick and suddenly faith in something seemed important. But in 2015, how? 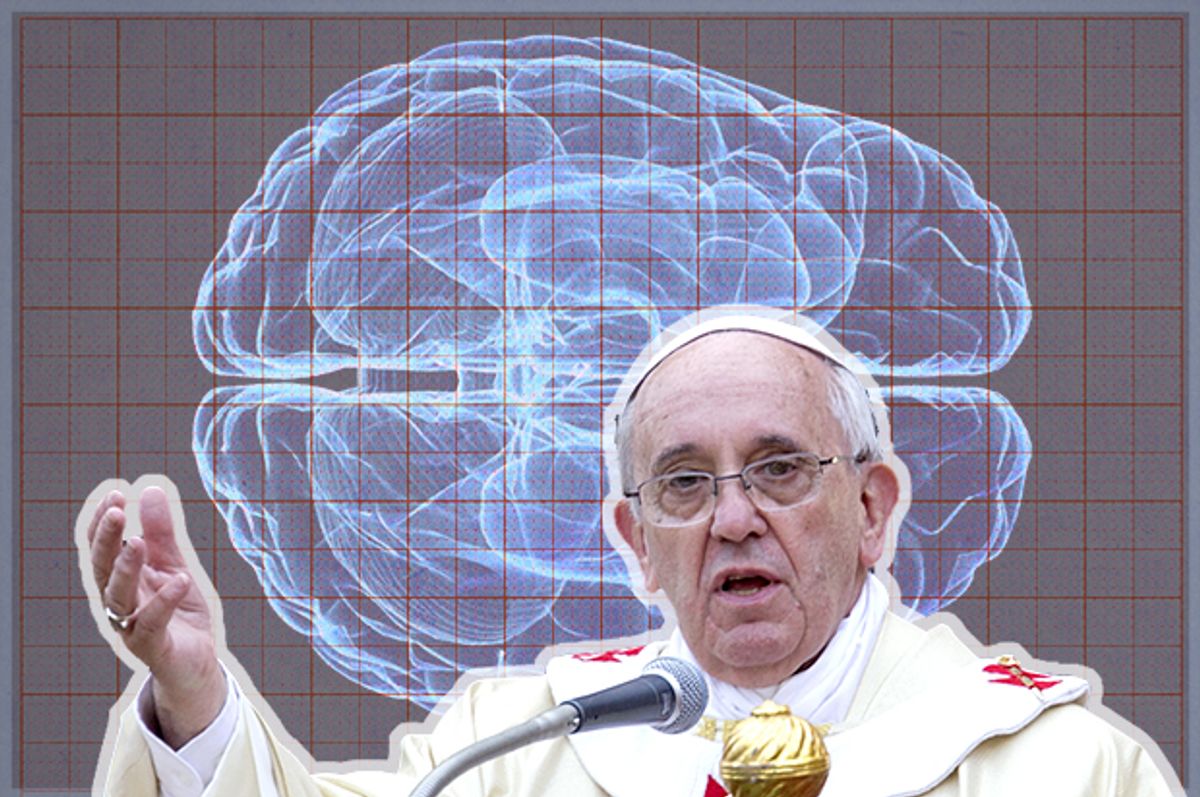 When I searched for God I found a man who looked like Will Ferrell.

This search I’d kept secret. God, these days? Are you nuts? “Think what times these are,” Saul Bellow wrote—a generation ago; it’s worse today. How, against a contemporary background, do you contemplate the almighty? Who believes there’s an oasis in 2015’s scattered metaphysical sand?

But I had a reason to search. A few years ago my 3-year-old son couldn’t rise from bed unaided, his walk was a limp. Our pediatrician frowned when breaking the news: Rheumatoid arthritis. And in that shiver of change I glimpsed, for my son, for me, a long line of vanishing possibilities. (The disease was most likely permanent.) And it was the same old dumb supplicant’s story. Gulped tears, inhibition, begging made ritual. Please, please, God—the tonality of fraudulence. Because how could I (secular, religiously illiterate I) talk to God? What could be said that wouldn’t embarrass my intelligence, or His (presuming I actually believed)?

This was a new feeling. I’ve been a writer my entire adult life, but I didn’t have any language. At the moment it really mattered, whatever fluency I'd had came pretty much to zilch -- to smoke and cobwebs.

And yet now my son was in bad shape. And so I asked God to help him.  And my son got well, in an almost miraculous fashion. It happened in an unlikely way: A stranger’s advice, skeptical doctors, a full recovery. (My wife wrote about it for the Times.)   This ecstatic surprise struck from me a real desire to thank, and to understand, and to believe more fully, in God. I prayed—self-invented, unschooled prayers—and I did nothing more than that. I did nothing, that is, to further my understanding, or even to deepen my thoughts about God, or belief in Him.

Two years later, my wife found herself — a lapsed Presbyterian — diagnosed with an invasive melanoma. Time, again, to ask for mercy. I began going to temple. Or, I tried to. I'd visit synagogues and hear rabbis and I found all of it off-putting.

But I was thirsting after guidance.  That's what it felt like, a need, centered in the throat. This is a universal deal, of course. Trouble = need. As it is with most of us, it is with me. I’m better suited to searching for answers than to the mundane facts of participatory worship. But next to my wife in bed, I felt like an ant colony: So many little black questions in me, hopes and doubts, crawling every which way.

And then, somehow, a second time, my prayer was answered. My wife after a succinct surgery was given a clean bill of health.

This set in train a search. I needed to find out more about God. Can you have faith today and remain a thinking person?

I approached religious leaders: Riverside Church’s first Minister of Social Justice; the president of a Jesuit university; the head rabbi of Brooklyn’s leading reform congregations; a renowned Buddhist, etc.  I wanted only to have a back-and-forth about how to believe — a heavily secular Jew and a number of influential faith-thinkers, hashing out the how of it, discussing whether religion can work in a digital age, to be published in an epistolary way.

What follows is the first of these exchanges—my interaction with Erik Kolbell, who looks like a bearded (handsomer) Will Ferrell, and is just as likable. He’s also a brilliant guy—a writer, psychotherapist, Yale Divinity School graduate, and ordained minister, and the first Minister of Social Justice at Riverside Church in New York City. (I became aware of him when I saw him on Charlie Rose talking about his inspired book "What Jesus Meant: The Beatitudes and a Meaningful Life.")

Kolbell sat waiting for me in the chosen restaurant, a hand-written sign, scrawled in rickety ink, propped on his glass. “ERIK KOLBELL.”  When he smiled there was a certain Muppetish softness to the mouth —ah! Here you are, sit, sit— a smile almost comic in its munificence, in its knowledge that munificence is, nowadays, a pretty rare article of trade.

What follows is a transcript of our written correspondence. The questions are mine, the answers are his.

One of the things I was struck by when I went to services—Reform Jewish, Presbyterian and Catholic—was how much time was spent, in elegant ways, asking for things. Generally, these were inoffensive and general things.   -Please protect us, oh Lord.-   But that gave me pause just the same. How can we—a comfortable New York flock, for example—ask for anything, when we know there are so many who have it worse than we do?

I share your quandary on this issue, Darin, not only because it invites selfishness at the expense of compassion, but because it runs the risk of promoting an unhealthy understanding of the relationship between the individual and God.  Even asking for innocent things, such as good health, suggests a kind of magical thinking that I don't necessarily subscribe to.  If I can pray to God for health, then why not wealth as well?  And if so, is God then simply being defined as a dispenser of goods and blessings?  A generous grandfather, pockets stuffed with candy, eager to dole it out if only we ask nicely?  Rather, by way of prayer, I am fond of the first three words of Psalm 119:36, which read simply "Incline my heart…"  For my money, this is what we can justly ask of God; that our consciousness of God is such that our hearts are inclined toward those things that promote personal integration, deepened faith, human justice and universal mercy. In answer, then, to the question you pose below, with the Bellow quote, I believe prayer is the endeavor on the part of the individual (or the community) to dispose ourselves to a deepening consciousness of what God might want of us in order that these things — integration, faith, justice and mercy — are made manifest in our lives.

So, then, you believe the Almighty wants something from each of us? Which leads to a bigger question: To what degree do you think God is involved in every person's life?

I am hesitant to impute any human characteristics to God, so even the term "want" makes me a little jittery.  As one theologian put it, "To say that God is love is really to say 'I experience what I call love from what I call God.'" It is the subjective experience and articulation of the objective reality of God; the infinite heavily filtered through layers of finitude. With this in mind, I would argue that our highest calling is to ascertain what it means to live a full and compassionate life, and then to aspire to live it.  We could say that this "pleases God" or we could say that it puts us in company with the manifestation of the ultimate good (or Good). As to your second point, I do not believe in a Grand Manipulator who sees to it that this or that team wins the big game, this or that town is spared the wrath of the tornado, this child lives and the other dies as a result of the same illness. I do believe that we can effect both good and ill on earth, and, as pertains the question of inexplicable and arbitrary suffering, while we cannot explain it (to do so is to demean it) we can redeem it.  And redemption is a holy task.

Much of the rest of the services were finding different ways to praise the Almighty—and the Almighty asking us for praise. Why would a divinity, by definition majestic, and the author of all the splendor and complex genius  of creation, be hungry for so much praise? That seems to underestimate God—cheapen Him, make him smaller with insecurity.  As does the subject of my first question. I mean, it seems organized religion too often sees God as a praise-hungry personal assistant: someone who spends all His time doing chores for people and wanting credit for it.

The flip side of asking God for things is praising him for the riches we enjoy.  If the praise is at God's bidding then we are indeed cheapening (not to mention anthropomorphizing) God.  But if, as some hymns, prayers, etc., are simply meant to be communal expressions of appreciation for the gift that is life itself, then they serve to keep us apprised of the difference between gratitude and entitlement.  To the point of loving God for His sake, I think I mentioned to you my problem with heaven and hell.  If we see them as rewards and punishments then they serve to arrest our moral development.  Any time a reward is attached to a moral gesture the gesture becomes cheapened.  Charity — caritas — is reduced to a quid pro quo.  There is nothing inherently moral about feeding the poor and visiting the sick if my motivation is ultimately selfish.  Better that I do it simply because it must be done. As la Rouchefoucauld put it, "We would frequently be ashamed of our good deeds if people saw all of the motives that produced them." And compare it to Tolstoy: "It is much better to do good in a way that no one knows anything about it."

I want to ask you about a Wright Morris quote:  “The purpose of religion, quite simply, is to dispense with the problem of death.” You mentioned your doubt about heaven and hell. Do you think there's a life after death-- or, more to the point, is it imperative that religion have an answer?

I think there are many believers who are agnostic about the question of an "afterlife," just as there are more than a few atheists who are similarly agnostic.  We just don't know, now, do we?  I am reminded of an old story of a rabbi talking to an unborn baby and telling the baby there is a magnificent world awaiting her. The baby responds: "Here's what I know. I know that I have every need met exactly where I am. I know that I have food, shelter, and comfort. What I don't know is what, if anything, lies at the other end of that tunnel. I don't know, because I have no empirical experience of it." This is all to say that I think it naïve hope to believe in a chunk of celestial real estate with winged angels and lilting harps. (Notice that nowhere in the Bible is there any real description of what the afterlife looks like.) But I also think it betrays a kind of arrogance to argue that the only reality that exists is the reality of our own perceptual experience, that perception gleaned and sorted out by the 10 percent of the brain we actually make full use of.  I am wide open to the possibility of a "beyond," which, again, we freight when we use language like "life after death," simply because it can suggest that whatever might lie beyond in some way resembles what we understand when we use the word "life." Think Timothy Leary, at the very least.