Mentored in the art of manipulation: Donald Trump learned from the master -- Roy Cohn 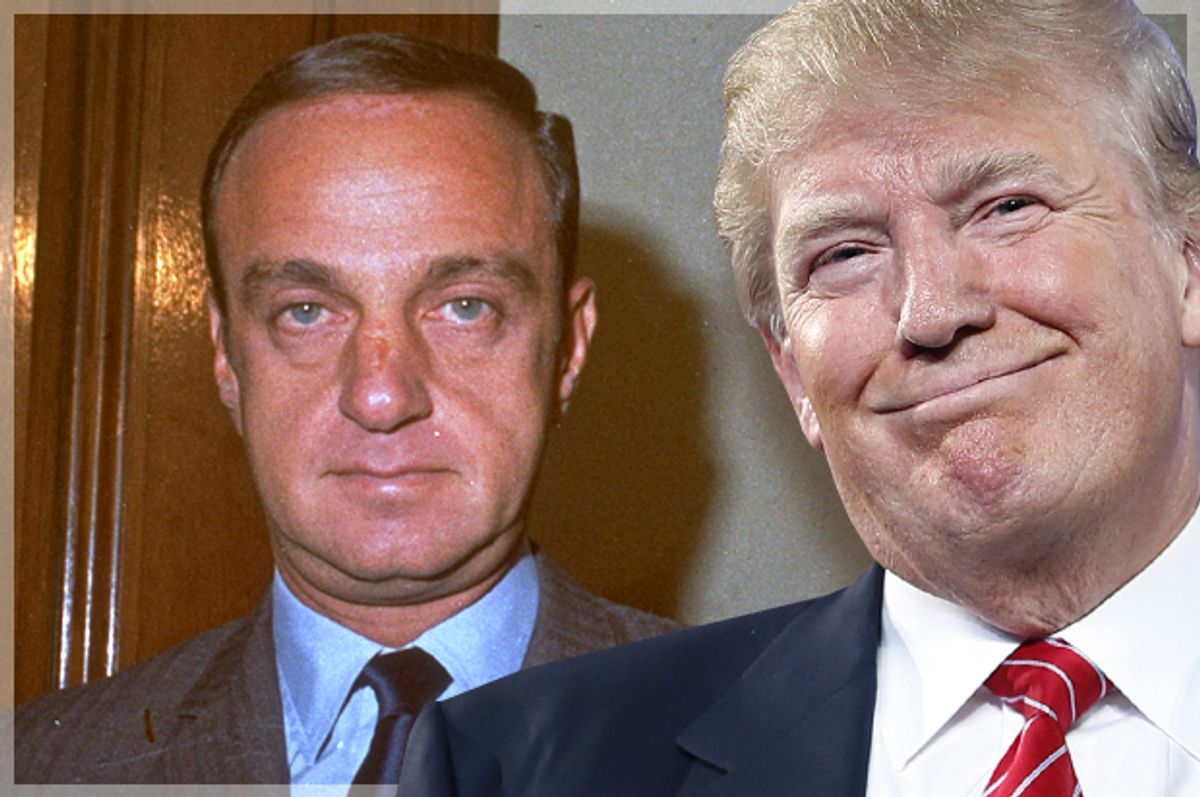 When the country finally ended Sen. Joseph McCarthy’s secular inquisition—“Have you no decency, sir?” asked one witness—his chief aide said that the witch-hunting Democrat from Wisconsin had been silenced by his colleagues because he “would not observe the social amenities.” In today’s parlance, Roy Cohn might say that McCarthy suffered because he refused to be politically correct.

McCarthy was such an effective tormentor of the innocent that his name became synonymous with character assassination. He was eventually driven out of the Senate. Disgraced alongside his boss, Cohn departed Washington for his hometown of New York City where he became the ultimate political fixer and a terror in his own right. If you needed a favor, or wanted to hurt an enemy, Cohn could do the job. He talked like a make-believe mobster and counted real ones among his clients.

Having spent years under the shadow of ethics complaints, Cohn lost his license to practice law in 1986, just before he died of HIV/AIDS, a diagnosis he denied. A gay Jewish man who spewed anti-Semitic, homophobic and racist remarks, he was actually quite charming in his way and left behind many friends. Among them were gossip columnists (like McCarthy, Cohn cultivated them) and two men he mentored in the art of manipulation: Roger Stone and Donald Trump.

When Trump was still in his 20s he hired Cohn and began to move in the same circles. Both were members of Le Club, a private hot spot where the rich and famous and social climbers could meet without suffering the presence of ordinary people. Later, when Studio 54 served the glitter and cocaine crowd, Cohn and Trump were there too. Cohn modeled a style for Trump that was one part friendly gossip and one part menace. Cohn looked and sounded like someone who could hurt you if you crossed him. Trump kept a photo of the glowering Cohn so he could show it to those who might be chilled by the idea that this man was his lawyer.

It was Cohn who introduced Trump to a young political operator named Roger Stone in 1979. Stone had cut his teeth in the Nixon campaign of 1972 where he posed as a student socialist who donated to an opponent and then made the contribution public. The fake scandal helped scuttle antiwar congressman Rep. Pete McCloskey’s presidential bid and ensured that Nixon was around to give America three more years of a disastrous war and Watergate.

Brilliant and perpetually aggressive—“attack, attack, attack” is his motto—Stone teamed up with Trump to create an ersatz presidential bid in 1987, and the two have been political partners ever since. Like Cohn, Stone is a risk-taker. He and Trump got caught breaking campaign rules as they fought the development of Indian casinos and state officials levied a hefty fine. Stone counsels clients to “Admit nothing, deny everything, launch counterattack.” He once told a reporter that it was his practice to always, “Get even.” “When somebody screws you,” he added, “screw ‘em back—but a lot harder.”

Trump’s version of the Stone credo, as he told me, is to “hit back 10 times harder” whenever he feels attacked. Like McCarthy and Cohn and Stone, Trump loves to gossip and trade in information. He too cultivates an air of menace to keep his opponents off-guard and he hates to apologize, or back down. And, like Cohn, he insists that the kind of talk his critics consider offensive is really just the truth expressed without the social amenities. This is an ingenious tactic for someone who wants to be free to say almost anything, even if it’s insulting, and get away with.

Much of what Trump says and does comes straight out of the Cohn/Stone playbook, including his eagerness to make people uncomfortable and confused. As a campaign consultant Stone advises candidates to open multiple battlefronts, and as a source for reporters he often mystifies anyone who seeks to understand what he’s up to. For his part, Trump is a man prone to outrageous statements that defy fact-checking and our fascination with him stems, at least in part, from the delightful challenge of trying to figure out when he’s serious and when he’s putting us on.

The current state of the Stone-Trump relationship is puzzling indeed. Stone has earned substantial sums for Trump and has always seemed to lurk behind the scenes in his political life. However, his outrageousness can seem like a liability and in 2008 Trump told Jeffrey Toobin of the New Yorker, “Roger is a stone-cold loser.” He also complained that Stone “always tries taking credit for things he never did.”

Trump told me that he finds it easy to cut off those who displease him and that none of those who are banished ever return. Given this stand, it may seem strange that Trump welcomed Stone back into his political circle prior to announcing his candidacy for the GOP nomination. The reunion was short-lived, as the Trump campaign fired Stone in August with an announcement that said he was promoting himself too much. However, Stone insists he resigned before he was fired and he has continued to stump for Trump in the media. He is, like Donald, a true descendant of the McCarthy/Cohn line and perhaps as impossible to fully disown as a member of the family.

Michael D'Antonio is the author of “Never Enough: Donald Trump and the Pursuit of Success” (Sept. 22, 2015; St. Martin's Press/Thomas Dunne Books). As part of a team of journalists from Newsday, he won the Pulitzer Prize for his reporting before going on to write many acclaimed books, including “Atomic Harvest” and “The State Boys Rebellion.” He has also written for Esquire, the New York Times Magazine and Sports Illustrated.