Christian school kicks out kindergartener because she has two moms 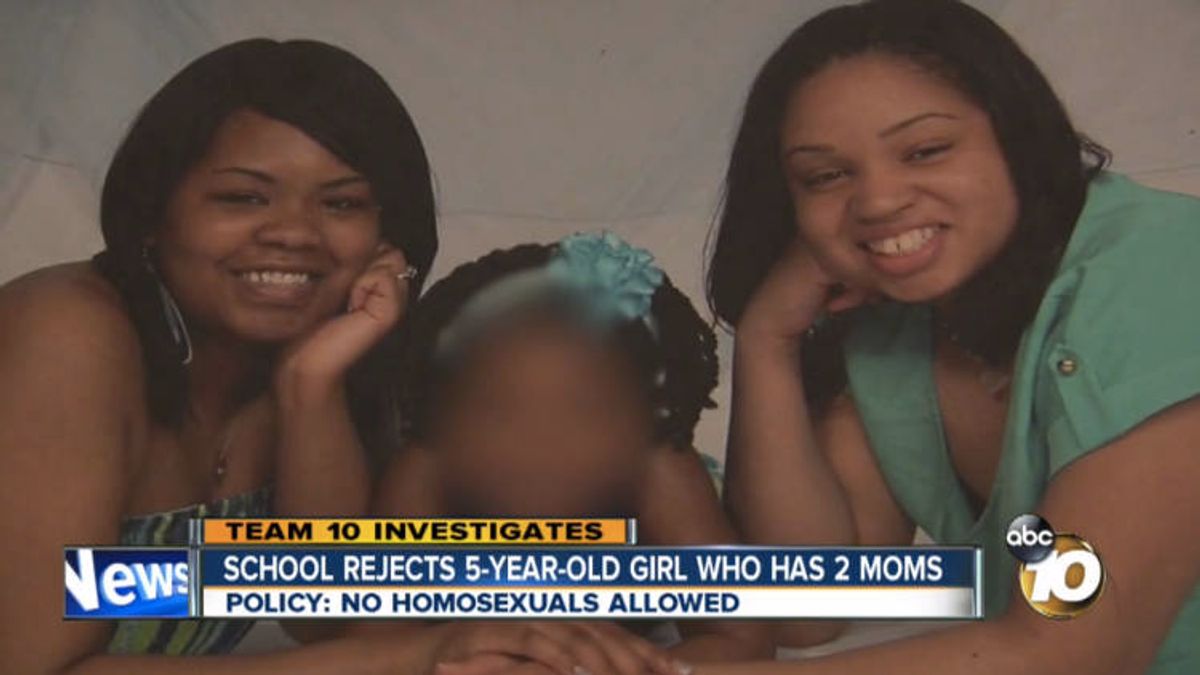 Sadly, nationwide marriage equality simply isn't enough to inoculate all children of same-sex couples from the cruelty and indignity that is anti-gay discrimination.

The latest example comes from San Diego, California, where a five year-old girl was recently barred from starting the first day of kindergarten after her school changed its nondiscrimination policy following the Supreme Court ruling on same-sex marriage, reports the local ABC News affiliate KGTV.

Mt. Erie Christian Academy, a private institution that does not appear to take any public funds, updated its handbook this summer to reserve the right to discontinue the enrollment of any student it finds "in opposition to the biblical lifestyle," citing at least one Bible passage that calls for homosexuals to be murdered:

Mt. Erie Christian Academy is a religious, Bible-believing institution providing education in a distinct Christian environment, and it believes that its biblical role is to work in conjunction with the home to mold students to be Christ like. On those occasions in which the atmosphere or conduct within a particular home is counter to or in opposition to the biblical lifestyle that the school teaches, the school reserves the right, within its sole discretion, to refuse admission of an applicant or to discontinue enrollment of a student. This includes, but is not necessarily limited to, living in, condoning or supporting sexual immorality; practicing homosexual lifestyle or alternative gender identity; promoting such practices; or otherwise having the inability to support the moral principles of the school (Leviticus 20:13a; Romans 1:21-27; Matthew 19:4-6; I Corinthians 6:9-20).

The new policy effectively barred one of the school's pre-school students from entering kindergarten this school year.

The five-year old's mother, Shenna (she asked that her last name be withheld) called the policy change "heartbreaking." The stay at-home mother said the she was unaware of the school's extreme anti-gay attitude and insisted that she wouldn't not have subjected her daughter to such humiliation had she known of their discriminatory policy before enrolling at the academy.

"If we knew from the beginning that this was unacceptable, they didn't condone or believe in this, if it was such a big deal, we would have never started her off there," Sheena said. "I would never put my child's emotional wellbeing in an unstable setting like that."

Shenna said that although both her and her wife, whose is currently deployed with the Navy, are Christian, they never considered their sexuality to be in conflict with the faith or the school's mission.

"What does our family life have to do with anyone else? Like no one's gonna be in danger."

She continued: "I want my baby to be safe when she grows up. I don't want her to ever have to be discriminated against because of her lifestyle. That's not fair."

Shenna told KGTV that she is looking for legal recourse but that her daughter continues to be out of the classroom as they search for an alternative.

"I miss my friends. I miss my teachers," the child told the news station.