In just weeks, Stephen Colbert has reinvented himself and made a network late-night show something new -- smart 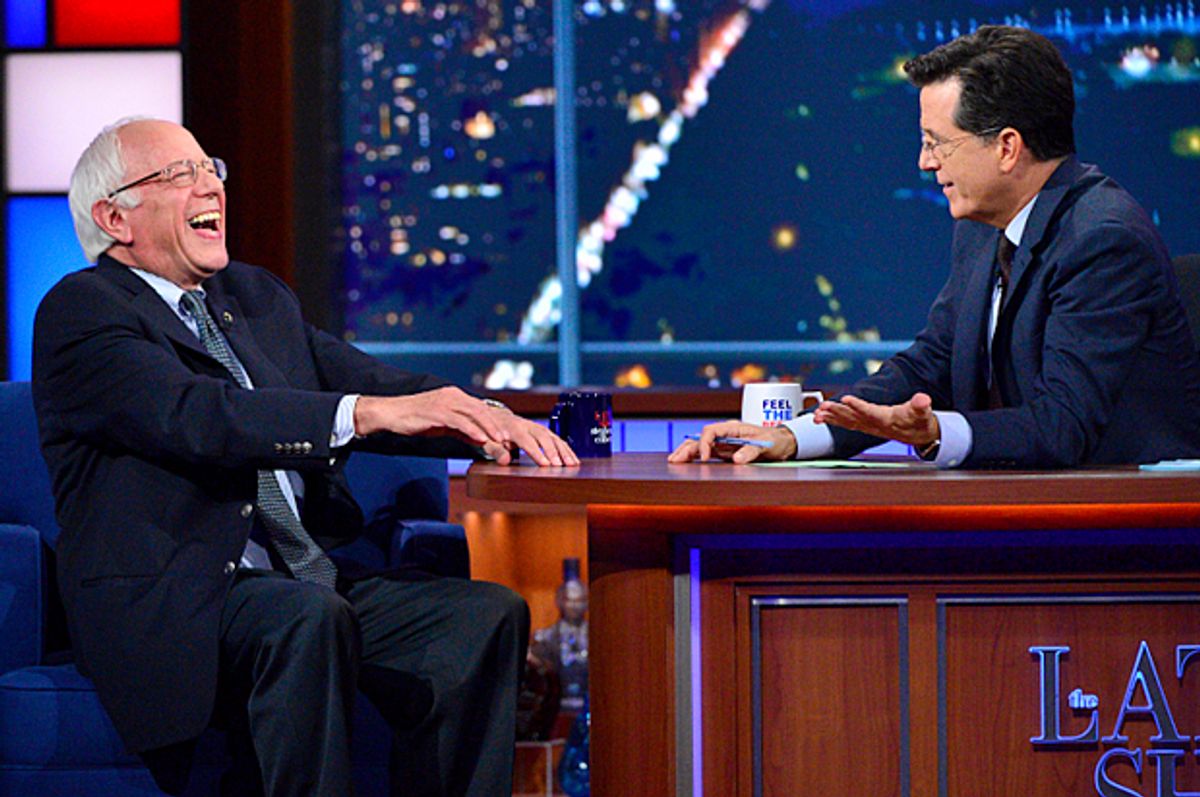 Ever since CBS announced in April 2014 that Stephen Colbert would be replacing David Letterman, many of his fans wondered if he would lose his edge after he moved from "The Colbert Report" on Comedy Central to "The Late Show" on CBS.

In his first three weeks as "Late Night" host, Colbert has had more serious guests (and more serious conversation) than Jimmy Fallon has had in the 19 months he's hosted NBC's "The Tonight Show" and the 12 years that Jimmy Kimmel has had his ABC nightly talk show.

But, in Colbert's case, "serious" doesn't mean dull. When he moved from Comedy Central, he didn't leave his provocative political bite behind. Rather than play a character who parodies bombastic right-wing buffoon Bill O'Reilly (his previous incarnation), Colbert is now himself -- a thoughtful, well-informed, religious, nice and clearly progressive individual with a sharp sense of humor. He can be sarcastic without being snarky, because his concern about the state of the world is a passion, not a pose. It's his mix of talents, and the combination of entertainment and education, that allows the show to appeal to a broad audience and makes it more than a late-night version of "Meet the Press." Colbert has done little to change the standard talk show format – the desk, the guests, the band – except that Colbert does his opening monologue sitting down.

In addition to some great musical guests (including Paul Simon and Pearl Jam), and a mix of interesting (Stephen Curry, Amy Schumer) and dull (George Clooney, Scarlett Johansson) interviews with sports and showbiz folks, he's asked telling, insightful questions to a variety of public figures that give the show an air of gravitas (Colbert likes to display his knowledge of Latin) that other talk shows lack.

Although Hillary Clinton apparently turned town an offer to appear on the show, Colbert has already interviewed presidential candidates Jeb Bush, Bernie Sanders, Ted Cruz and Donald Trump. Colbert's conversation with Vice President Joe Biden -- which focused on their shared experience of losing family members to early and unexpected death -- was a remarkably heartfelt and intense moment. As with his interview with an upbeat Sen. Elizabeth Warren ("the game is rigged"), you could sense Colbert's not-too-subtle effort to convince Biden to run for president.

On Thursday night, with Pope Francis garnering headlines for his visit to the United States, Colbert invited journalist Andrew Sullivan, Maria Shriver, comic Jim Gaffigan and Archbishop Thomas Wenski of Detroit to discuss the current condition of American Catholicism and the impact of the pope's visit. Rather than invite a celebrity artist as his musical guest that night, he recruited the interfaith (Christian, Muslim and Jewish) YMCA Jerusalem Youth Chorus as well as New York's St. Jean Baptiste Choir. They performed a mesmerizing version of "Joy to the World."

His interview Friday night with 18-year old Nobel Prize-winning activist and author Malala Yousafzai was amazing. Although she was on the show in part to plug the new documentary "He Named Me Malala," she captivated the audience with her discussion of her efforts to get the U.N. and world leaders to invest in education for young girls, her confrontation with the Taliban, and her willingness to forgive her attackers. Her radiant sense of humor and her ability to perform a clever card trick were unexpected bonuses.

Unlike most talk show hosts, Colbert did haven't to rely entirely on his notes to ask Tesla and SpaceX CEO Elon Musk about his plans to make outer space a tourist destination. Musk told Colbert that Mars is a "fixer-upper of a planet."

Colbert is still getting into his groove. When Donald Trump refused to say whether he thought Obama was born in the United States, Colbert let him off the hook too easily. The interviews with Supreme Court Justice Stephen Breyer, Energy Secretary Ernest Moniz, novelist Stephen King, and Uber CEO Travis Kalanick lacked the drama and spirit of his other exchanges.

Some of Colbert's jokes, gags and routines (especially his riffs on public figures like gay marriage opponents Kim Davis and Rep. Steve King) have been hilarious, while a few others went bust. But his quick wit, and his obvious knowledge of current events and issues, shines through every night. He clearly intends to make "Late Night" the kind of intelligent entertainment show that we haven't seen since Jack Paar, Dick Cavett and David Susskind were on the air.