Inside the Religious Right's hive mind: Why Trump was booed and Carson cheered at the Values Voter Summit

Over the past several days, GOP hopefuls looked to curry favor with hardcore culture warriors. Here's what happened 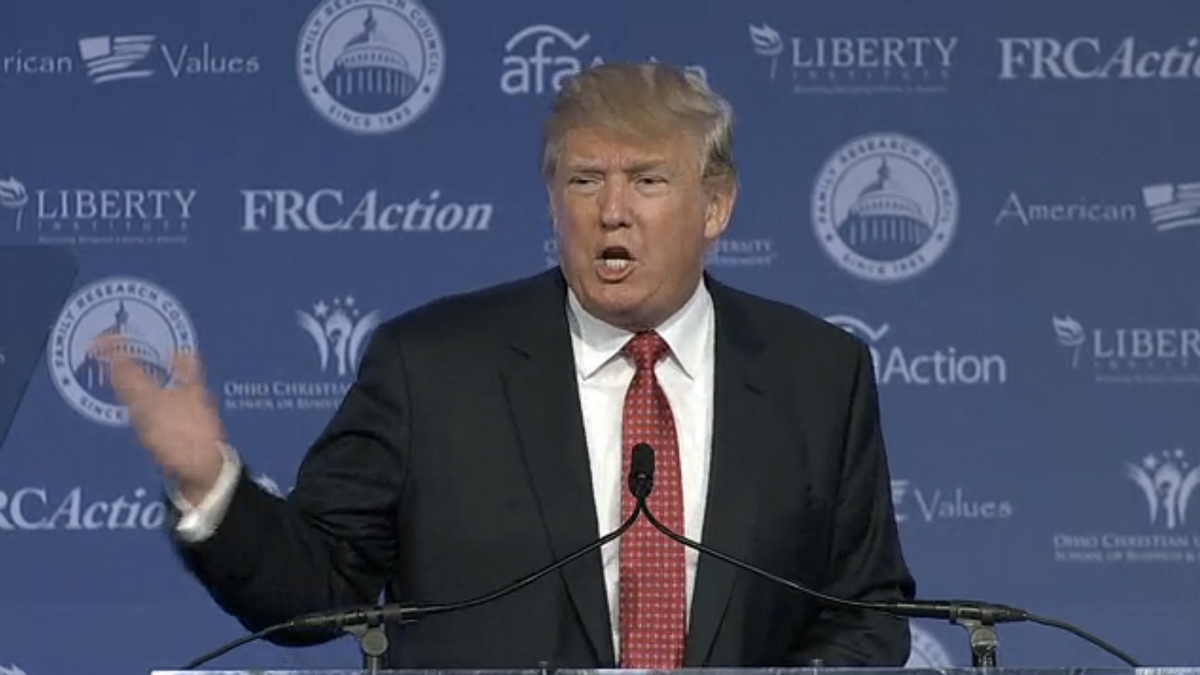 Last week was one for the political books. The Pope brought his message about the need to help the poor and deal with climate change to America, apparently leading Catholic Supreme Court Justices Scalia, Alito and Thomas to boycott his historic speech to a joint session of Congress. At the same time, the evangelical activist community held its annual Values Voter Summit featuring many of the GOP presidential candidates who once would have been excited to celebrate the pope's visit but were instead rather sullen and unhappy about his apparent desire to talk about that Jesus fellow and his message of love and tolerance instead of policing the sexual habits of women and scolding gay people for being gay.

And right in the middle of all this, the Speaker of the House abruptly resigned his seat because he was about to lose his office at the hands of extremists who want to shut down the government in order to destroy Planned Parenthood. Oh, and of the leading Republican presidential candidates, Dr. Ben Carson spent the week doubling down on his contention that Muslims must renounce their religion in order to prove they will follow the constitution -- which says there must be no religious test for office. It's been a memorable week for religion in American politics.

The pope's visit was received with ecstatic excitement by Catholics, the news media and a good many Democrats of all faiths.  Catholics are always happy to see the Pope, for obvious reasons, but this one is particularly accessible and has such a serene and open demeanor that it's even more thrilling than usual. This visit seems to have been a tremendous success among the faithful. The news media are excited because they must believe the pope's visit is a ratings grabber since they've been covering his every movement from the moment his plane set down at Andrews Air Force base. Hours of watching planes on the tarmac of various airports and convoys of official vehicles is evidently something the viewing public has been hungry to see. And finally, Democrats are happy because this Pope is addressing their concerns during a political campaign in which the issues of inequality, climate change and poverty are front and center of their agenda. (And they are undoubtedly relieved that the Pope didn't harp on the issue of women's rights.)

The Pope's visit was good for everyone but Republicans, many of whom are Catholics themselves and have spent the last few decades cultivating a Religious Right movement that merged many of the issues in common with the evangelical protestant and conservative jewish communities in America. There was a time not very long ago that the Catholic Church hierarchy was so openly biased in favor of the Republican Party that the American bishops wanted the Pope to excommunicate presidential candidate John Kerry for being pro-choice. I have written before about the growing schism in that coalition and it's never been more obvious than during this past week. As Catholics all over the country were making pilgrimages to catch a glimpse of the pope, Jeb Bush, a practicing Catholic, found it necessary to distance himself from the pope on climate change, declaring that "he is not a scientist" (actually, he is) and “put aside Pope Francis on the subject of any political conversation," which is wishful thinking on his part. Democrats still await the Bishops' call for his excommunication for failing to follow the Pope's teachings on climate change.

It was fascinating to watch the Values Voter Summit try to deal with the Catholic deviation from the Republican path. Neither Jeb Bush nor Carly Fiorina attended citing "scheduling difficulties." In Bush's case it makes sense that he would schedule something else since everyone but the money boys find him to be squishy on all their issues. Fiorina made a big mistake since this group is extolling her for her relentless Planned Parenthood lies and she could have expected to get a very warm reception. (They admire a politician who is blatantly dishonest for their cause. It shows commitment.) The rest of the candidates mostly ignored the fact that the pope was in the country at all, which could never have been anticipated a few years ago. It appears he is officially no longer welcome on their team.

The big winner of the straw poll was Senator Ted Cruz, followed by Dr. Ben Carson. Cruz gave a fire-breathing speech that knocked the participants' socks off, as he usually does. But there is something about Cruz, despite him checking off every box for this crowd, that just can't seem to translate into the national polls. They wildly cheer his crazy talk but they apparently can't see him as a president. One suspects that they'll eventually see Carson the same way.

It was Marco Rubio who may have made the greatest impact. Not only was his speech received very positively, the crowd booed Donald Trump when he called Rubio a clown. (They don't mind Trump criticizing Rubio's immigration flip flop, but they don't like the name calling, which means they want Rubio to maintain respect, a telling desire.) Rubio had the good fortune to be the one to announce that Speaker John Boehner had resigned his seat and received the appreciation the bearer of such good news can expect. As The Hill reported, he smoothly fit the news into his message of generational change:

Rubio, who is running for president, shared the news that broke just before his speech, working it into prepared remarks where he questioned why a Republican Congress isn't "able to stop our country from sliding in the wrong direction."

"Just a few minutes ago, Speaker Boehner announced that he will be resigning," Rubio said to thunderous applause.

"With all due respect to people who serve in government — it is important at this moment, with respect to him and the service he has provided to our country — it’s not about him, and I’m not here today to bash anyone, but the time has come to turn the page."

One assumes that the reason everyone was so happy is that they, along with the rest of the GOP, believes that John Boehner, like Eric Cantor and other Republican leaders, have failed to deliver on the promises they made when they won a congressional majority. Someone forgot to inform them that the president has a veto and that the courts are an equal branch of government. The presidential candidates are taking their point seriously, however. With the exception of Jeb Bush and John Kasich, every one of them has tacitly or overtly endorsed shutting down the government over Planned Parenthood. It should be interesting to see how that plays out over the next couple of weeks.

That brings us to the final religious moment of the summit in which Dr Ben Carson doubled down  on his proposed religious test for Muslims, in which they would be required to disavow certain tenets of fundamentalist Islam before being allowed to be president, insisting that it is necessary to protect the integrity of the Constitution. Having it pointed out repeatedly that the constitution expressly forbids any religious test to qualify for office failed to convince him or his followers that this is a nonsensical concept, particularly for a party which is fetishizing the notion of "religious freedom."

(The Values Voter Summit gave an award to Kim Davis, the country clerk from Kentucky who refused to issue marriage licenses to gay couples even as Dr Carson was saying that Muslims should be refused the right to run for office because of Muslim prejudice against gays.)

What all this adds up to in unknown beyond the fact that Republicans are both confused and energized. This was best illustrated by Donald Trump's appearance at the Summit in which he was booed for insulting Rubio but brought the crowd back around by promising to fight the War On Christmas with everything he has:

After all is said and done that may just be the only thing all the various factions of the 2016 Republican party can agree upon.