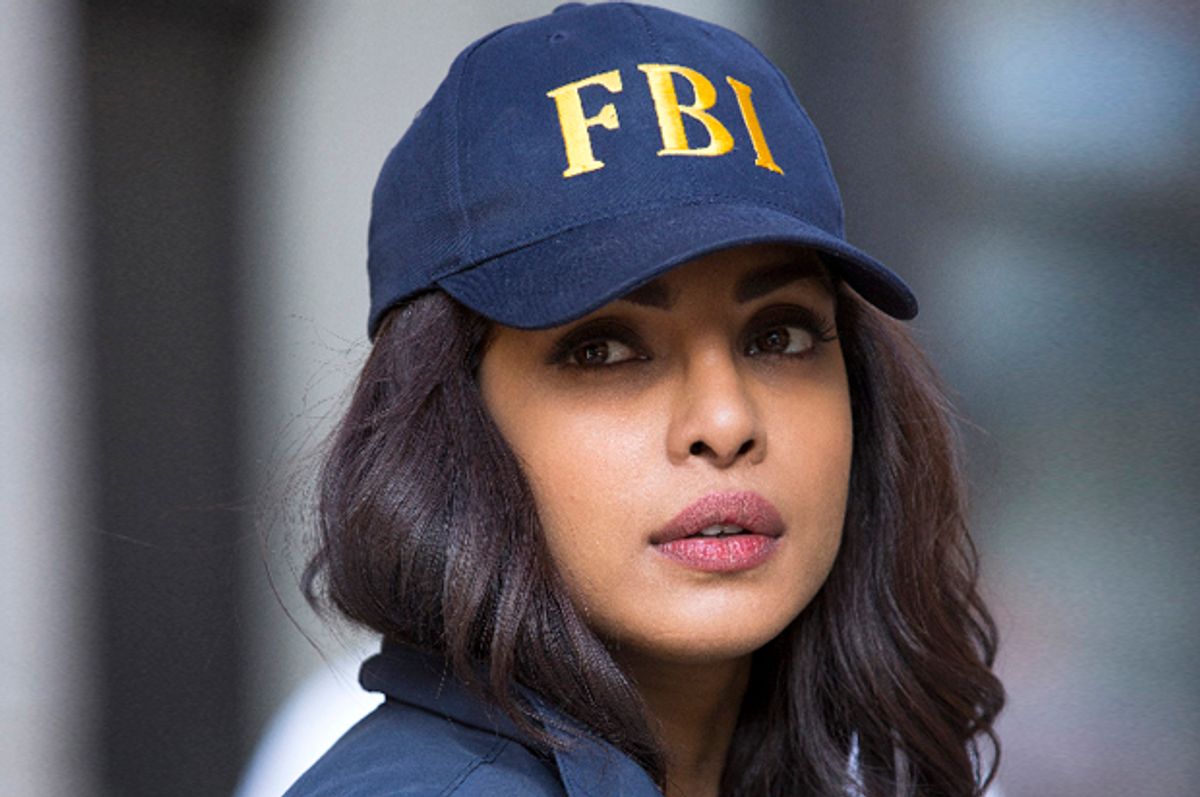 Representation in pop culture, as it matters in principle, has become a cornerstone of contemporary cultural critique. The lack of it is still staggering, but conversation about diversity and inclusion is more mainstream than ever: It was the driving momentum of this year’s Emmys and continues to be a pillar of network strategy at both ABC and Fox. Indeed, as you might have noticed, I write about representation all the time. As a woman of color myself, I know that it is valuable.

But as I discovered yesterday while watching the premiere of “Quantico,” there is quite a difference between knowing that representation matters and feeling that it matters by seeing yourself represented on-screen. It’s an opportunity I get quite rarely: I’m a first-generation Indian-American, meaning that I exist in a very small minority between two much larger cultures. Though fast-growing, “Asian Indians,” as the U.S. Census Bureau calls us, don’t even make up 1 percent of the American population — we tot up to just under 3 million, based on 2010 numbers. Back in the subcontinent, the population of India alone is over 1 billion, and combining the racially similar populations of Pakistan, Bangladesh and Sri Lanka adds up to something like 1.5 billion people. In America, it’s difficult to find characters that look like me. In India, which has a huge film industry, it’s hard to find characters that I can relate to culturally. (Very few Indian women on-screen have had a goth phase, after all. Even fewer are queer, sexually active or just plain rebellious.)

Still, compared to other ethnic minorities, I have very little to complain about. What Indian-Americans do have going for them, in the game of representation, is affluence; doctor shows have been showcasing desi talent for decades now, because so many Americans actually do see their first (and maybe only) Indian-Americans at a clinic or hospital. And as Indian-Americans enter American politics and the creative classes—largely because of that affluence—characters like Aziz Ansari's bureaucrat Tom Haverford in “Parks and Recreation” or Hannah Simone's model Cece Parekh in “New Girl” have become known quantities. American audiences have a fascination for Indian culture that is at times very frustrating, but it does mean that yoga, bindis, saris and henna are somewhat understood by domestic audiences. Similarly, Indian audiences have a fascination for Western culture and Westernized desis — protagonists for Bollywood films are often expats from the U.S., the U.K. and Australia, if only to justify filming in far-flung and exotic locales. I happen to live in the era of Mindy Kaling and Aishwarya Rai, of Padma Lakshmi and Freida Pinto.

And yet. It appears I was hungrier than I thought. As Rohin Guha writes in the Aerogram, when you’ve been content with scraps for your whole life, you never expect to be thrown a bone. Even “The Mindy Project’s" Mindy Lahiri is, true to type, a doctor.

“Quantico’s" lead, Priyanka Chopra, is a certified A-lister in India—an actress on the level of Jennifer Lawrence here in the states, with that similar combination of critical approval, youth, beauty and mainstream appeal. Her decision to tackle the American market via television is strikingly forward-thinking—while film shut out the promising debuts of Sarita Choudary and Parminder Nagra (who both went on to have careers on television), TV is more eager than ever to promote artists from different ethnicities. ABC bent over backward to give Chopra what she wanted with “Quantico”; the actress secured the lead role in her own drama but will still be free to act in Indian films. Guha continues, “In our consumption of American pop culture, we are frequently asked to be content nibbling on scraps — and Chopra, in the most diplomatic way possible, has indicated that if she comes to the U.S., she won’t settle for scraps herself. No bit roles, no cameos, no typecasting.” As Chopra herself said earlier today, in an interview with Vulture: “I don’t look at Hollywood as a big break. Indian film stands on its own.”

In just the first episode of “Quantico,” Chopra has hooked up in a car, admitted to murder, and been arrested under suspicion of terrorism. The plot of “Quantico” takes no prisoners—it doesn’t even stop to draw breath. The pilot, “Run,” has at least four discernible major twists, and two of the introduced characters are already dead. Without being a Shonda Rhimes show, it has clearly been coaxed into being as close of a copy to one as possible—the classroom looks like an exact copy of the one in “How to Get Away With Murder”; there’s a glass hallway on the training compound that looks identical to one in Grey Sloan Memorial; and those pictures taped on glass in the investigation are eerily reminiscent of Olivia Pope & Associates’ project wall. Still, the show has its own non-Rhimes flavor, and a lot of that comes from Chopra, who carries the pilot through the force of sheer charisma (and an absolutely stellar blowout).

An interesting detail, at present, is that while Chopra is not mixed-race, her character is—an Indian mother and a white American father. Showrunner Joshua Safran has said that this parentage has a plot significance that will unfold further down the line. I hope the significance is not merely to make her more relatable (read: less “foreign”) for American audiences. As a result, though, her name (“Alex Parrish”) and identity aren’t exactly Indian-American, even if her accent and appearance are both noticeably Indian. Maybe that means I cannot quite claim her as Indian-American; or maybe that means that in her cobbled-together heritage that is part American, part Indian and significantly influenced by the mainstream, she is even more like me than I first thought.

Regardless, Chopra portrays Alex as sympathetic, but pretty mysterious; she’s innocent, but not that innocent. The audience is drawn into admiring her incredible coolness, instead of indulging her naiveté (or laughing at her klutziness, as is often the case with lead heroines). But she’s still a warm character, able to trade barbs with her romantic interest and befriend her roommate. That’s the type of thing that requires some skill. It’s not easy to be engaging when your character is keeping as many secrets as is humanly possible—Viola Davis just won an Emmy for it, after all.

The most common criticism of “Quantico” is that it is a silly show. This is true. But it is silly in the same way that “Scandal” and “How to Get Away With Murder” are silly; silly in the same way that “Empire” and “Game of Thrones” and “Outlander” are silly. Television is quite silly, to be honest. A lot of people in costumes running around on a set, pretending to kill each other and crying all the while. But the silliness has a subtext, and with “Quantico,” the subtext is that an Indian-American woman can be an American hero—or an American villain—just as much as the next person. We don’t have to be doctors or in arranged-marriage plots in order to see ourselves on television. “Quantico” is little more than a fantastical sandbox full of gadgets and car crashes, sure; but for once, I feel actually invited to play.