Hillary Clinton opens up to Lena Dunham: "I'm a feminist, and I say it whenever I'm asked"

Sandra Bland, campus sexual assault and feminism are all tackled in this wide-ranging interview 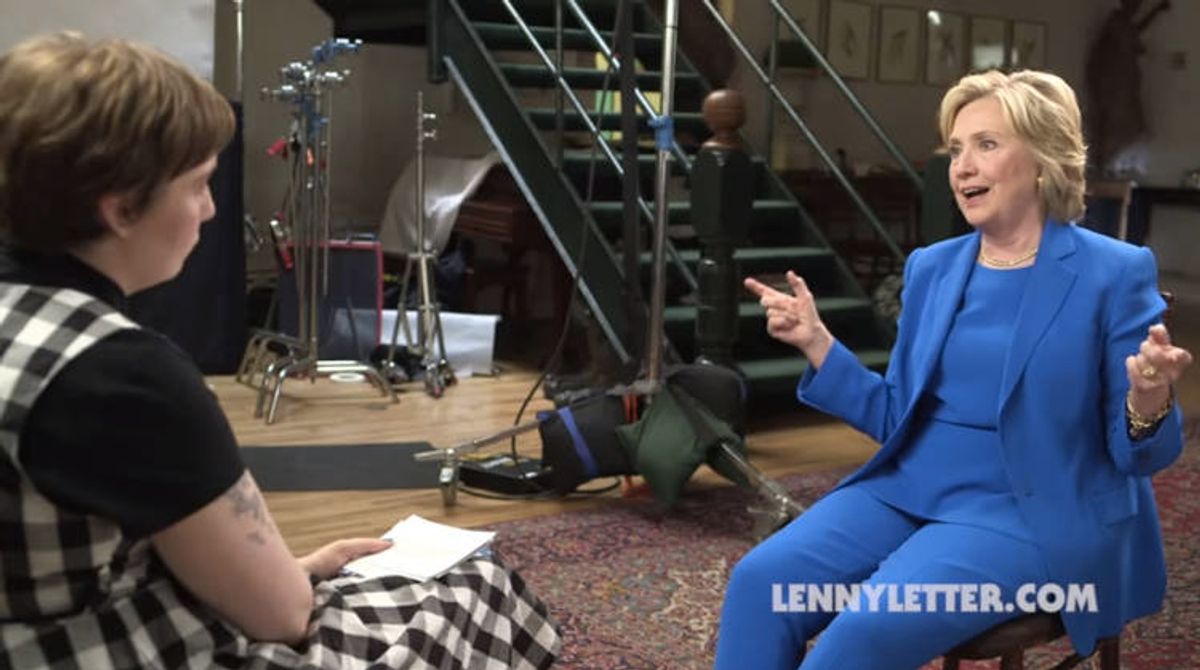 Described as a "a snark-free place for feminists to get information: on how to vote, eat, dress, f---, and live better," the online newsletter from "Girls" star Lena Dunham debuted today with a much hyped exclusive interview with Hillary Clinton.

The newsletter, co-created by "Girls" co-showrunner Jenni Konner, also includes pieces entitled “Saying Yes to My Queer Wedding” and “Rumors I Heard About My Body: Is My Period Weird?” Clinton, who reportedly turned down an invite to the new "Late Show with Stephen Colbert," sat with the feminist comedian as her campaign aims to shore up support with female voters.

During the wide-ranging interview, Clinton discussed her conversion from a Goldwater conservative to a Democrat, her youthful activism to extend male visiting hours at the all-girls Wellesley campus, and what it felt like to take a backseat to her husband's political endeavors early in their marriage.

Dunham told Time that the interview was meant "to highlight Hillary in the feminist landscape of the last 20 years," and revealed her decades long admiration for Clinton right at the top of the newsletter. Dunham introduced her interview with this homage to Clinton:

Whether you agree with Hillary’s politics or not, she represents something beautiful and all too rare: a woman choosing to say “No thank you” to societal expectations. A woman who gets up when she’s been knocked down, attacked for not just her politics but her marriage and her body. A woman attempting to claim a historically male space and saying, without a trace of apology, “I can do this, and I deserve this.”

"I’m a feminist, and I say it whenever I’m asked," Clinton reassured Dunham, adding that she is "always a little bit puzzled when any woman, of whatever age but particularly a young woman, says something like, 'Well, I believe in equal rights, but I’m not a feminist.'"

Clinton then repeated the story of her own ideological evolution, recounting her liberal awakening in college. "I think that’s part of what your late teens and 20s are all about. You have to decide what you really believe," the former Goldwater girl insisted.

She also went on to describe her first post-college "sliming" job in Alaska, including this comical anecdote:

I was packing the salmon. You had to pack head-tail, head-tail, head-tail. And I noticed that some of them didn’t look really healthy to me. So I raised it with the guy who was running the plant. He said, “What do you care? They’re gonna be shipped overseas! Nobody in America’s gonna eat them.” I said, “Well, I don’t think that’s right. We shouldn’t be sending salmon that’s gonna make anybody sick.” He said, “Oh, just don’t worry about it.” Anyway, I go home that night, I go back the next day, and the whole operation has disappeared.

Clinton's message to young women was clear: work past your fears (and become more politically active.)

"At every step along the way, I never could have predicted what I would have ended up doing," she told Dunham, expounding on her fears about marrying Bill. "It’s just not something that I had ever imagined":

I was terrified about losing my identity and getting lost in the wake of Bill’s force-of-nature personality. I actually turned him down twice when he asked me to marry him.

That was a large part of the ambivalence and the worry that I wouldn’t necessarily know who I was or what I could do if I got married to someone who was going to chart a path that he was incredibly clear about. My ideas were much more inchoate. I wasn’t sure how to best harness my energies. So I was searching.

"I don’t feel like police officers are being as well trained as they need to, to try to prevent problems, to try to make it possible to talk with people to end some of the incidents that are going on," Clinton argued. "I think their first reaction is one of anxiety and nervousness and they overreact. I think we have a lot of work to do."

Curiously, not included in the edited newsletter was Dunham's and Clinton's discussion about the campus rape epidemic and the Occupy Wall Street protests.

"I think we've got to be more comprehensive," Clinton said of what defines Wall Street, pointing to "shadow banks" like Lehman Brothers and insurance giants like AIG as irresponsible financial actors who don't qualify as traditional "big banks." Clinton argued that she has a "good idea about what we need to do and what we can get done" to prevent future financial malfeasance, arguing that she her record on Wall Street reform takes a back seat to no other candidate.

Watch both segments, via Lenny: