Trevor Noah’s terror: The new “Daily Show” host is off to a shaky, if charming, start 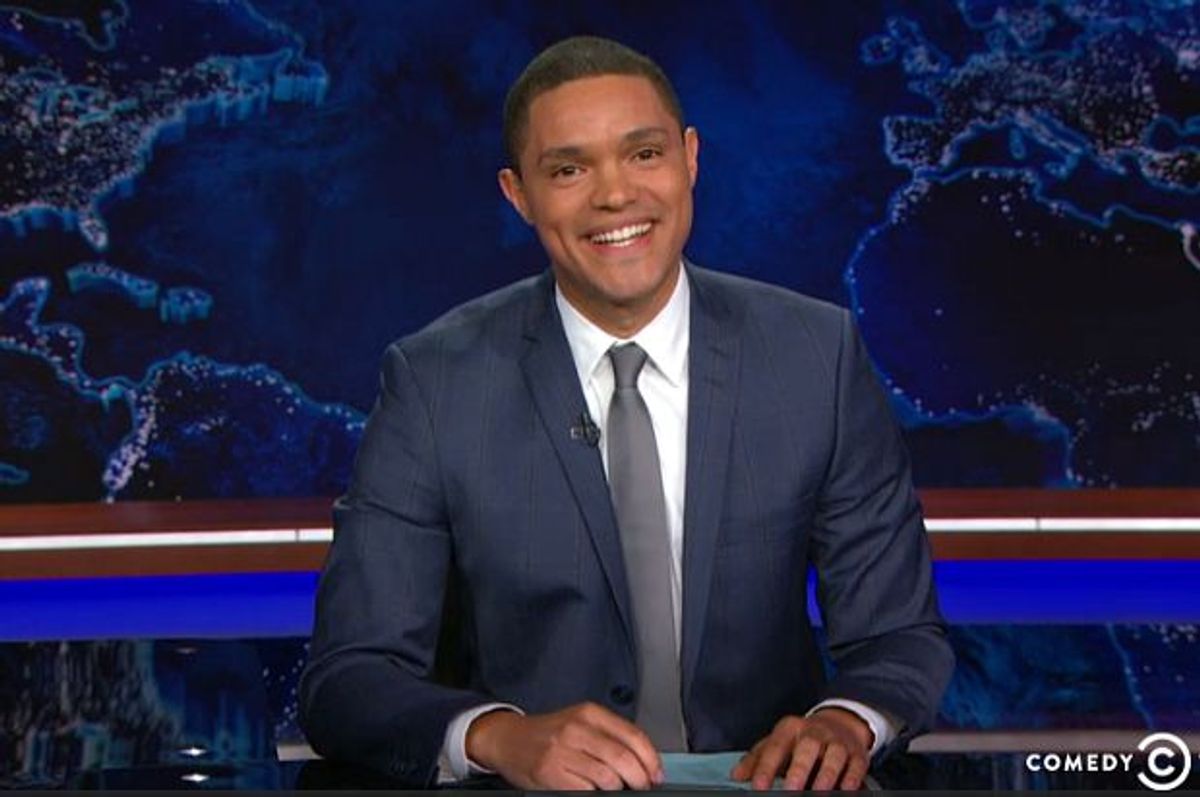 It’s hard to imagine what Trevor Noah could have done in last night’s premiere episode of “The Daily Show With Trevor Noah” that would have changed anyone’s preconceived notions about what America’s most beloved late-night news/politics/comedy show will be without Jon Stewart. He neither excelled nor failed; it wasn’t perfect, but it wasn’t flawed, either. He did not transform in front of our eyes, over the course of 33 minutes, into either an incarnation of Stewart or a horned and pitchfork-wielding caricature of the devil. He is still and simply Noah; dimpled, confident, untested, and probably, on some level, terrified.

The terror came through a bit in Noah’s segment with Kevin Hart, his first and so far only guest, and that’s probably because Noah couldn’t prepare with Hart as he could with the “Daily Show” correspondents and with the monologues he’d worked on with the writers. Hart is a charismatic scene-stealer wherever he goes, and last night he could not resist tossing Noah a bit of a curveball—he introduced himself by handing Noah a giftwrapped present. Noah looked flummoxed, even though a lightly wrapped box of neckties is the least threatening gift possible. I noticed on rewatching that while Hart was narrating the scene, with his characteristic punchiness (“It’s ties, man! … That’s a thoughtful gift!”) Noah was sifting through the box with trepidation, like he was expecting something to go awry in the 11th hour. Even after the neckties were discussed and dispensed with, the host had some trouble regaining his balance.

A thing that is probably too little said about the job of hosting “The Daily Show” is that it is terrifying. In Noah’s case, it’s doubly so, because he’s stepping into an institution that was created by a man who is now maybe a bit too reverently beloved by staunch fans. Noah mostly handled himself with aplomb last night, but the slight awkwardness around the neckties revealed for a brief moment the enormous amount of pressure he’s feeling.

I’ll be checking in on “The Daily Show With Trevor Noah” all week, because it’s nearly impossible to have an opinion on just a bit over 20 minutes of programming. But what is clear, from both pre-show discussion and this opening episode, is how little about “The Daily Show” has changed. The logo was updated, yes, but if anything that underscores just how superficial the changes really are—a facelift, but the bones of the show are identical. The writing crew is almost entirely the same, sans Stewart, and the format reflects that. Indeed it seems like “The Daily Show” is specifically pulling its punches a bit—going for some more reliably mainstream and slightly raunchier comedy, like a joke about the Pope’s penis and a short, gruff one-liner about Whitney Houston’s suicide. With the interview with Hart—which was neither very political or very funny—and an actual spit-take in the middle there, last night’s episode lost a bit of the feel of “The Daily Show,” against its best intentions.

Where Noah did shine was where he’d clearly rehearsed—not because his delivery seemed rehearsed at all, but because his demeanor was so comfortable, so confident, so charming. He winked at the camera—twice—and navigated his John Boehner clips with a lot of ease, demonstrating a semi-flirtatious rapport with both the audience and with the soon-to-be-ex-Speaker of the House himself. It’s definitely a bit different from Stewart’s distracted-dad schtick, but I liked it. (The audience seemed to, as well; either that, or they were on bath salts, to quote Emily Nussbaum.)

Directly following “The Daily Show With Trevor Noah” was “The Nightly Show With Larry Wilmore,” and what struck me about the cold open and first several minutes of that show is how confident, expansive, and stylistically idiosyncratic Wilmore has become; after a debut that struggled a little bit to have something to say, his monologue contained a battery of jokes that were significantly funnier than anything Noah delivered. And partly that’s because Wilmore did not mess around, even a little bit. His segment on Jeb Bush last night absolutely killed, because he went after Bush’s now notorious dismissal of black Americans as freeloaders merely looking for federal handouts. It wasn’t safe, it wasn’t celebrity-oriented, and it wouldn’t have ever been on “The Late Show With Stephen Colbert” or “Late Night With Seth Meyers,” and that is why we watch late-night news on Comedy Central.

So yes, this is the biggest change: Noah did not dismantle, destroy, or tear apart any tenets of conservative ideology today, and furthermore, I doubt he’s going to for some time. He is a brand-new professional on a very big stage, and that little bit of terror over a box of ties was quite revealing about how far Noah has to go. Spit-takes and celebrity guests are all very well and good for some kinds of shows, but eventually, we will want more stringent criticism from “The Daily Show.” Everything I have learned about Noah convinces me that he can be that host, given enough time to settle into the role. But this is the digital age, and a presidential election packed with GOP candidates is rearing its ugly head; is it any wonder we are impatient?