Another one bites the dust? A look at Trey Gowdy's worst moments as new reports suggest his retirement is near

Is Trey Gowdy on the way out? His camp is pointedly refusing to give a clear answer 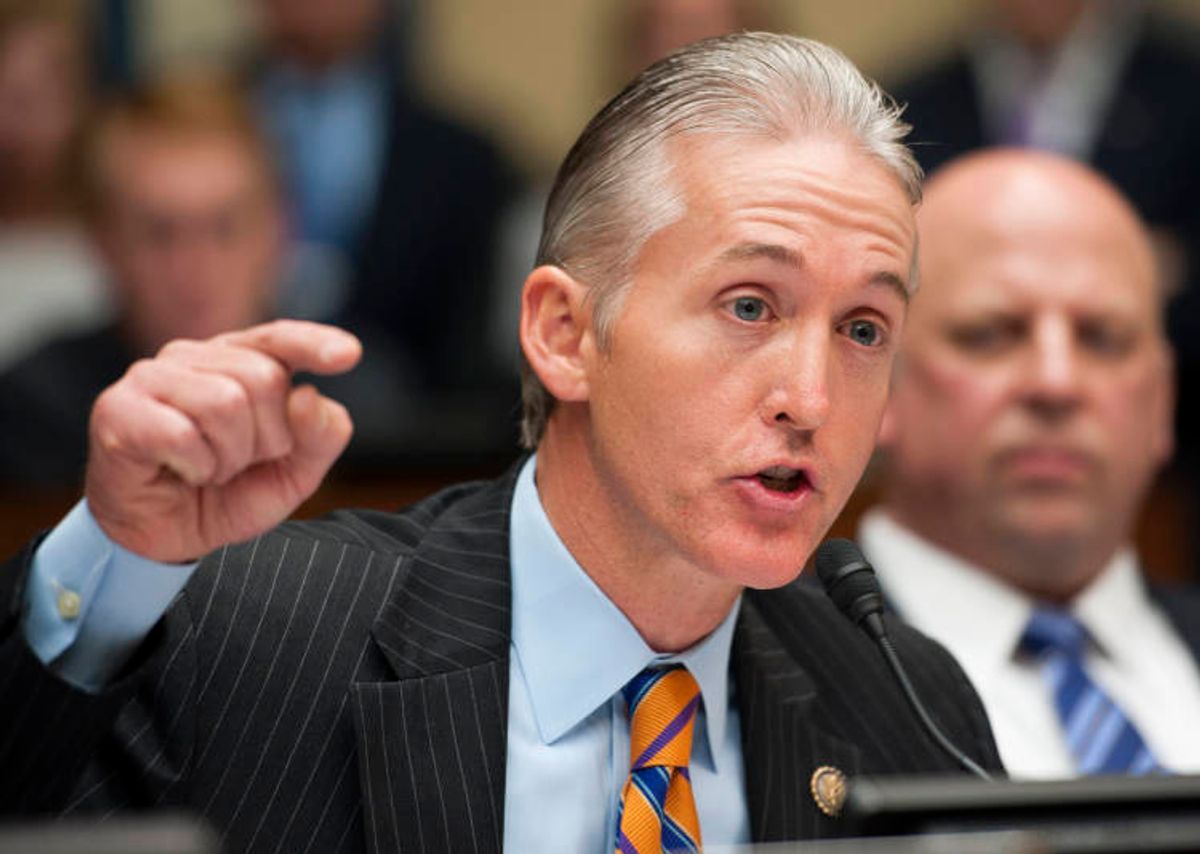 Just as the Republicans' rising Benghazi star nears his apex with the testimony of Hillary Clinton before his congressional committee and some of his conservative colleagues clamoring for his ascent into House leadership, Rep. Trey Gowdy curiously finds himself at the center of reports about his impending retirement from the Congress.

The South Carolina Republican stood up in the room and gave an emotional speech, telling his colleagues he loved them all but that he would not be a candidate for leadership. Instead, Gowdy said he's staying focused on leading the committee investigating the 2012 terrorist attack on a U.S. facility in Benghazi, Libya.

Former Secretary of State Hillary Clinton, the Democratic presidential front-runner, testifies before his panel next month.

“When I’m done with that, I’m going to return to South Carolina where my heart is,” Gowdy told his colleagues, according to a source in the room.

“Trey wants to go back to South Carolina, and God bless him for that,” Louisiana Republican Congressmen John Fleming said during a CSPAN interview this morning. “At the end of his term, yes,” Fleming said of Gowdy's plans to return his home state, presumably to be featured in future "Forensic Files" episodes. “He plans to go back home, and he wants to finish his work on the Benghazi special committee. But he loves South Carolina and he loves his family, and he wants to go back and spend the rest of his life there.”

Nevertheless, Gowdy's office denies any such announcement was made.

“No, he is not announcing anything regarding 2016," spokesperson Amanda Duvall told reporters today.

Still, whether or not Gowdy's on his way out, here are a couple of reasons why we'd be happy to see him gone on the heels of news that his House Select Committee on Benghazi just bested Watergate to become the longest running special congressional investigation in American history:

Gowdy promised to bring prosecutorial gravitas to the Benghazi investigation (Gowdy is a former federal prosecutor) but he's only kept the accusations of a political charade alive with his fundraising habits.

The fundraising arm of House Republicans, the National Republican Congressional Committee, welcomed Gowdy as chairman of the special Benghazi select committee with an email the day after his appointment encouraging supporters to "become a Benghazi watchdog" by donating to the NRCC.

The group's website still encourages visitors to "help fight liberals" and "stand with Congressman Trey Gowdy, the Benghazi Select Committee, and House Republicans as we fight for the truth about what happened with the Benghazi terrorist attack." The website prominently features a button to contribute below.

Gowdy has since publicly denounced efforts to fundraise off Benghazi yet somehow regularly finds himself in the middle of such efforts. "I cannot and will not raise money on Benghazi,” Gowdy said after backing out of a Virginia fundraiser titled, "Beyond Benghazi" earlier this year. “I also advise my colleagues to follow suit, and I think I did so in a pretty unambiguous way.”

Such an admonish did little to stop the Stop Hillary PAC from collecting nearly 470,000 signatures in support of Gowdy's "pursuit of the truth and justice." And just as recently as this month, Gowdy found himself forced to cancel a fundraiser on behalf of Republican presidential candidate Marco Rubio at the home of a prominent Texas art collector who housed paintings by Hitler in his home.

2. Selectively leaking information to the press

The ranking Democrat on Gowdy's Benghazi committee, Rep. Elijah Cummings, has blasted Gowdy for overseeing reckless leaks to the press in an effort to tarnish Democratic presidential candidate, Hillary Clinton, citing a misreported story about Clinton's emails in Politico.

"It now appears that someone who was given access to the Select Committee’s documents leaked doctored information to the press in order to make unsubstantiated allegations against Secretary Clinton," Cummings wrote in a strongly worded letter addressed to Gowdy earlier this year.

Again, Gowdy denied the accusations then, insisting that his investigation was aboveboard. “Serious investigations do not leak information or make selective releases of information without full and proper context,” Gowdy said at the time.

3. His bill allowing the House of Representative to sue President Obama

Benghazi is not Gowdy's only beat. After he took a seat on the House Government Oversight Committee in 2010 he immediately vowed to conduct “seven hearings a week, times 40 weeks” in an effort to thwart President Obama.

When that plan didn't work out as hoped, Gowdy introduced a bill that would allow the House or the Senate to sue President Obama or any executive branch employee for allegedly failing to enforce a law. The cases would be settled by the U.S. Supreme Court under Gowdy's legislation.

"The Constitution says the president has a duty to faithfully execute the law, so for the health of the republic, it would be nice to debate what that phrase means,"Gowdy argued in defense of his farcical proposal.

Admittedly, if Gowdy were to have a saving grace validating his worth on the Hill, it would have to be this glorious performance as Benghazi hearing bouncer -- booting Congressman Darrell Issa from closed-door deposition.

Issa, who conducted his own notably lengthy and fruitless investigation into Benghazi when he was chairman of the House Oversight and Government Reform Committee, set the tone for outlandish GOP antics so when Gowdy barred the San Diego republican from crashing former Hillary Clinton adviser Sidney Blumenthal’s deposition it really made us miss the fellow: