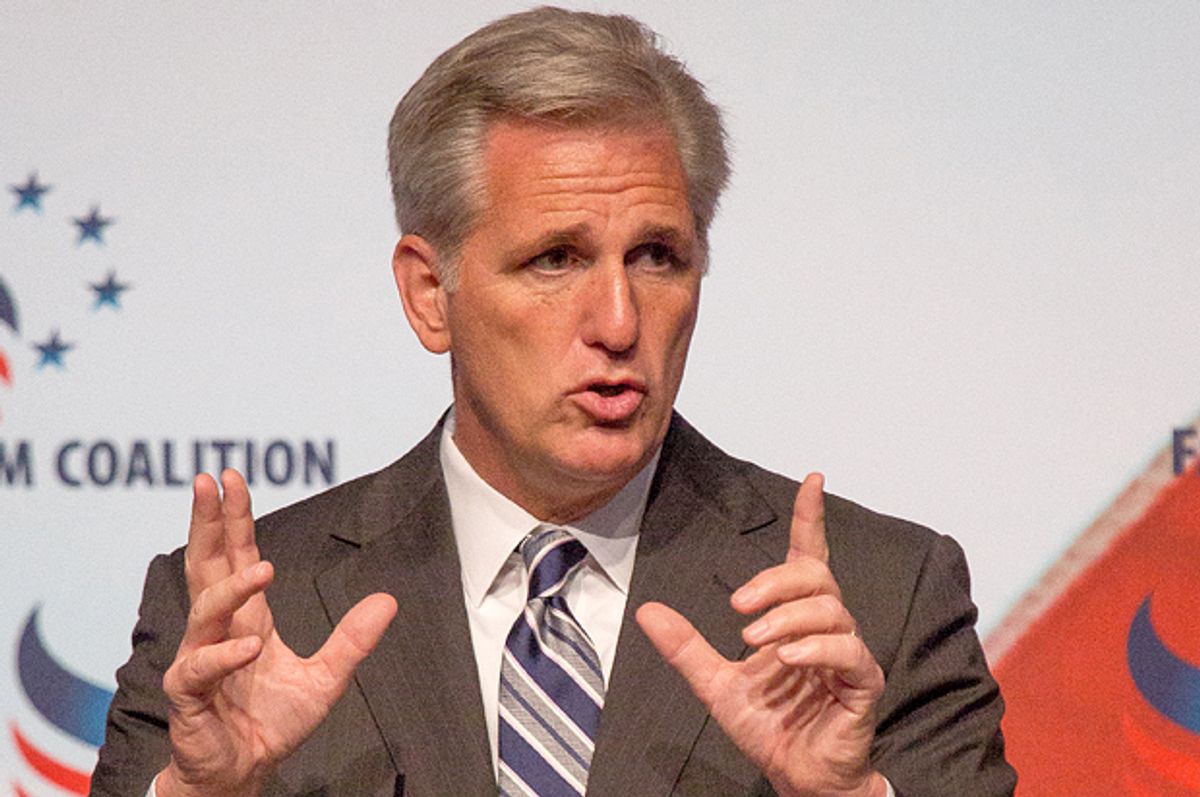 House Majority Leader Kevin McCarthy is, at this moment, the Democrats’ best pal. He went on Fox News last night to talk up his campaign to replace outgoing House Speaker John Boehner, and he ended up saying out loud and on television the one thing Republicans aren’t supposed to say about the House Select Committee on Benghazi: it’s all about taking down Hillary Clinton:

This is an archetypal example of the Kinsley Gaffe: a politician accidentally uttering a truthful statement. Anyone who’s paid even cursory attention to the GOP’s treatment of the Benghazi attacks will likely have already concluded that the party’s interest in the matter is linked to Hillary Clinton’s presidential ambitions. But it’s still bracing to see one of the most powerful Republicans in Washington come right out and brag about how he and his colleagues set up a taxpayer-funded investigation to damage the political prospects of the opposition party’s leading presidential candidate. It’s downright scandalous, and precisely the sort of political corruption that Republicans argue is at the heart of the Obama administration’s response to Benghazi.

No less remarkable is the fact that McCarthy offered up the politicized Benghazi investigation as an “example” of how he would conduct business as Speaker of the House. He just put it right out there and told Sean Hannity that the McCarthy Congress will be a series of investigations aimed at hurting the Democrats’ chances of electoral success.

He’s also impugned what little credibility Benghazi committee chair Trey Gowdy enjoys, and he’s given critics of the committee all the reason they need to trash the committee as a disreputable and untrustworthy exercise in partisan scapegoating. One Democratic member of the Benghazi committee had already called for the investigation to be shut down, and other Democrats are doing the same in the aftermath of McCarthy’s remarks.

The Benghazi committee has always been wrapped in obvious fictions that provide its members and supporters with the barest minimum of plausible deniability as to its true purpose. We were told that the committee was necessary because dang it, we still just don’t know what happened in Benghazi (just ignore the half-dozen or so official investigations that preceded it). Committee chair Trey Gowdy frequently asserts that he is concerned only with information that is relevant to the committee’s mandate (as he’s expanded the investigation to areas that, by his own admission, are outside the committee’s purview and have little or nothing to do with the Benghazi attacks). Gowdy also insists that he’s running a professional investigation that has no interest in partisan politics and is committed to learning the truth about the events that led to the deaths of four Americans (as it leaks at every given opportunity, feeding often misleading information about Clinton’s emails to reporters).

McCarthy’s candor has robbed the committee of its already specious claims to credibility. And he’s handed Clinton a powerful weapon to use against her critics. The Clintons’ political history is defined in part by the self-destructive behavior of Republicans during the 1990s, who turned the congressional oversight process into a nakedly political enterprise to destroy Bill and Hillary. With the likely next Speaker of the House boasting about the Benghazi committee’s political agenda and holding it up as an example of how he’d run things in his chamber, Hillary can say it’s déjà vu all over again, and you’d be hard-pressed to disagree with her.