60 years after Dean's fatal car crash, Hollywood is still trying to figure out how to talk about stars' sexuality 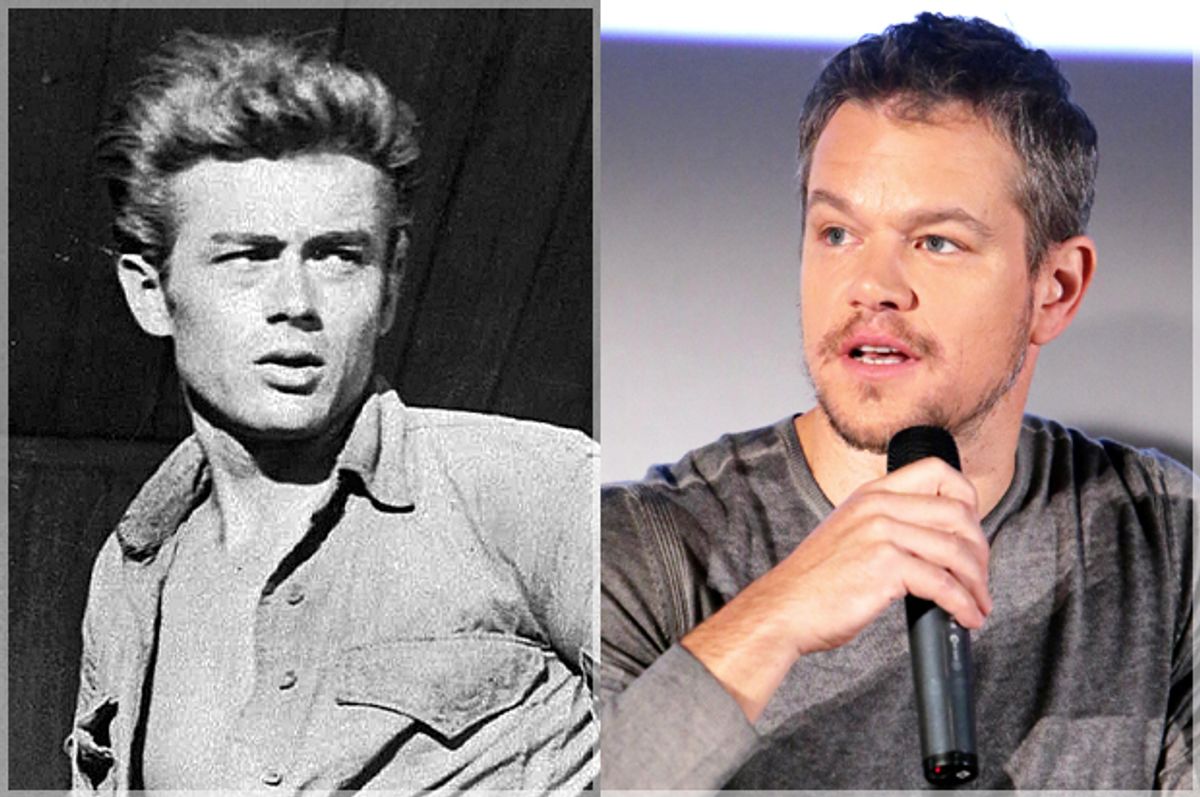 For 60 years, since James Dean died in a car crash on the late afternoon of Sept. 30, 1955, at age 24, a debate has raged about him. Was he straight, gay, bisexual? Actually, the debate has been going on for longer than that. Even while he was alive, there were rumors about his private life. He didn’t help matters any when he once answered a question about his sexual orientation by saying, “No, I’m not homosexual. But I am also not going through life with one hand tied behind my back.”

Indeed, in the photo opportunities set up for Dean by Warner Bros., the studio that released his three pictures — "East of Eden," "Rebel Without a Cause" and "Giant" — he was depicted as dashing, handsome and, above all else, heterosexual. He was photographed attending movie premiers with starlets like Terry Moore and Natalie Wood. He went on a handful of dates with Ursula Andress, all of them carefully documented with pictures. But Warner Bros.’s pièce de résistance came when it arranged for Dean to have a six-week “romance” with MGM hot property Pier Angeli, generating numerous news stories and fan magazine articles. According to press reports, the couple was deeply in love, but the affair ended abruptly when Angeli chose to marry not Dean but pop singer Vic Damone.

Here is the problem with the image of Dean Warner Bros. manufactured at the time. It wasn’t accurate. While he did have affairs with women, his substantive relationships were with men. Throughout the '50s and '60s, the rumors about Dean’s sexuality remained just that — rumors. Then, in the '70s, sexual politics began to change. Slowly, gay people, famous and ordinary, gained visibility.

By 1975, Jonathan Gilmore, an actor who was a close friend of Dean, felt he could reveal in "The Real James Dean" that their friendship included sexual experimentation. That same year, biographer Ronald Martinetti reported in "The James Dean Story" about Dean’s involvement with Rogers Brackett. A successful advertising executive in Los Angeles, Brackett opened doors for Dean and eventually moved him to New York where he helped him land his first show on Broadway. “I loved him and Jimmy loved me,” Brackett told Martinetti. “If it was a father-son relationship, it was also somewhat incestuous.”

Then, in 1992, in "Little Boy Lost," journalist Joe Hyams disclosed that Dean’s first meaningful relationship occurred while he was growing up in Fairmount, Indiana. As most of his contemporaries were going steady with girls, Dean became involved with a local Wesleyan minister named James DeWeerd. “Jimmy never mentioned our relationship nor did I,” DeWeerd said to Hyams. “It would not have helped either of us.”

In 1994, I published "Boulevard of Broken Dreams: The Life, Times, and Legend of James Dean." Even though previous books had made disclosures about Dean’s homosexuality, my book was generally perceived as outing him, since I documented his affairs with men, both short- and long-term. This seemed to disturb critics. Publishers Weekly called the book “a graphic sexual biography that’s likely to shock Dean fans.” Entertainment Weekly described the book with adjectives like “steamy,” “soggy,” “skewed.” Time spent a page attacking me before concluding, “Alexander’s inferences about Dean’s private life may make for cocktail-party chatter, but they finally are irrelevant.”

William Bast didn’t think so. For five years, he and Dean had had a complicated involvement, starting in college when they shared a small apartment in Santa Monica, continuing when they lived in a room at the Iroquois Hotel in New York, and going all the way up to the time Dean died when, Bast would claim, they planned on moving into a house together in Los Angeles.

Bast had written the first biography of Dean, "James Dean," published the year after he died. Naturally, this being 1956, there was no mention of homosexuality. Through the years, as Bast became a successful television writer, producing mainstream fare like "The Hamptons" and "The Colbys," he maintained his friendship with Dean was platonic. So I was careful not to say their on-again, off-again friendship was sexual. Instead, I said they were so close friends thought they were having an affair.

That wasn’t good enough for Bast who filed a lawsuit against me in federal court in California. According to Bast, "Boulevard of Broken Dreams" “falsely accuses me of having had a long term (often sleazy) sexual relationship with Dean.” Despite my careful use of language, he believed “no one could come away from reading the book without understanding the book to report (falsely) a five year sexual affair between Dean and me.” His lawyer added: “Plaintiff [Bast] has done nothing to deserve being so falsely portrayed in the public’s eye. As a matter of law, this false portrayal is defamatory per se…. [B]eing so portrayed around the world has thrust Plaintiff [Bast] into the public eye in a way that he does not want and which upsets him deeply.”

Depositions were conducted. We were getting ready to go to trial. Then suddenly Bast dropped the suit on the condition that future editions of my book include a denial that he had had an affair with Dean. That was 1995. Fast forward to 2006. Three and a half decades after Stonewall, the public’s perception of homosexuality had changed fundamentally. Entertainers like Ellen DeGeneres and Elton John had come out only to see their careers skyrocket. The gay marriage movement had taken hold with the first state, Massachusetts, legalizing same-sex marriage in 2004. And in certain circles in Hollywood it was now trendy to be gay.

So Bast published "Surviving James Dean," in which he documented his five-year love affair with Dean, what he had sued me for a decade earlier. The book’s cover claimed this new “uncompromisingly honest, revealing” book “boldly addresses the task [Bast] began [in James Dean] but was unable to do justice to at the time, owing to legal constraints imposed by his publishers, by Dean’s studio Warner Bros., and out of respect for the actor’s own family.” So in the past Bast was unable to tell the truth about his and Dean’s relationship for legal reasons! There was no mention of the fact that when I merely alluded to the true nature of their relationship Bast hauled me into court.

To be fair, sexuality is often hard to describe, much less document. Since I published "Boulevard," I discovered evidence of an affair Dean had with Geraldine Page, the now legendary Academy Award-winning actress, while they appeared on Broadway in "The Immoralist." I describe the affair in my new portrait of Dean, "Being James Dean." As it happened, it was just after he stopped seeing Page, to go to California to shoot "East of Eden," that Dean consummated his affair with Bast in a hotel room in the Sonoran Desert not far from San Diego. Or so Bast revealed in "Surviving James Dean" — finally.

It’s ironic that Hollywood, a staunch defender of liberal causes for decades, has had such a struggle dealing with the sexuality of the stars it creates. The problem of how and when to talk about it, and why, has not gone away either. Consider Tom Hardy, who was asked by a journalist at a recent press conference to discuss his sexuality and responded with a curt “Why?” Or Matt Damon, who now-famously announced, “It must be really hard for actors to be out publicly…. I think you’re a better actor the less people know about you, period. And sexuality is a huge part of that,” going on to call it "one of the mysteries that you should be able to play." Sixty years may have passed, but in some ways the thinking in Hollywood has not evolved much beyond the way it was the day James Dean died, at least as far as actors and their sexuality is concerned.

Paul Alexander is the author of numerous books, among them "Boulevard of Broken Dreams: The Life, Times, and Legend of James Dean." His new portrait of Dean, "Being James Dean," has just been released by Rosetta Books.