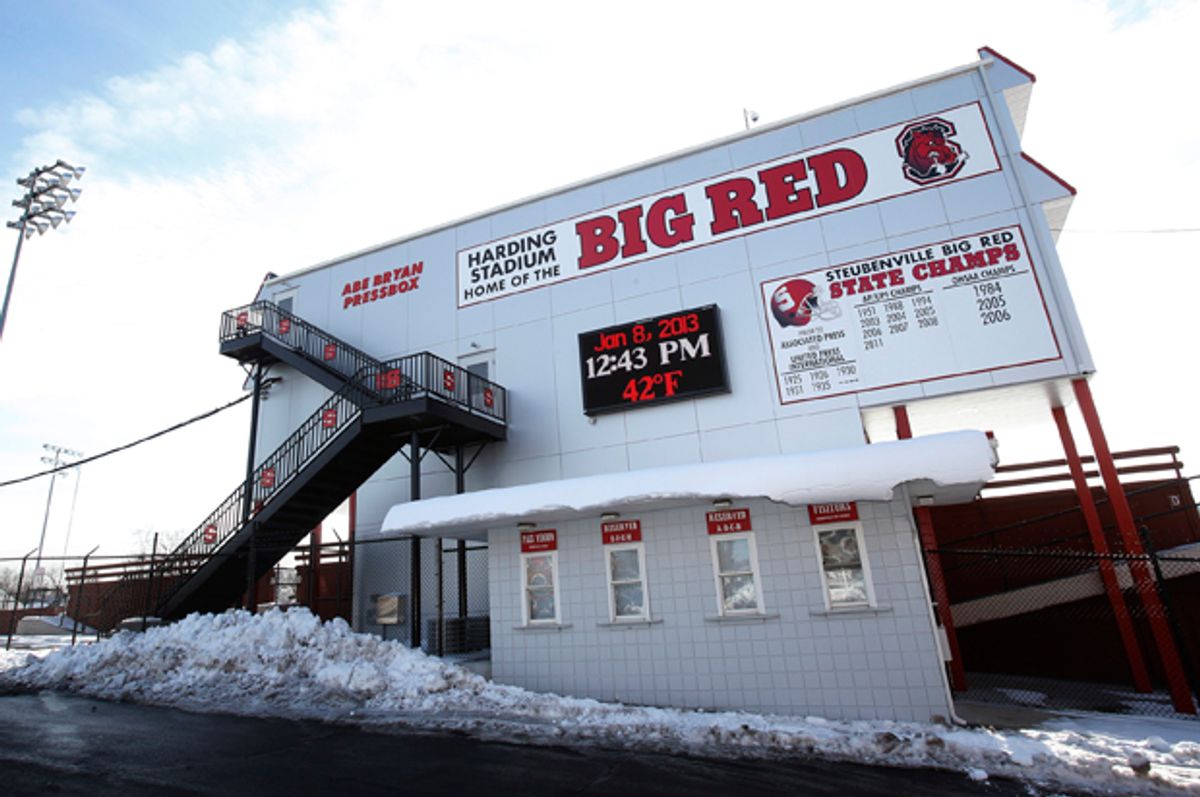 In March of 2013, Ma’lik Richmond, one of two teenage male football players accused of sexual assault of an intoxicated teenage girl in Steubenville, Ohio, told ABC’s Elizabeth Vargas, “I didn't rape anybody. I didn't witness a rape going on. And if I would have thought that somebody was being raped or anything like that, I would have stopped it.” Days later, he was found guilty of rape in court.

A 2013 JAMA Pediatrics study of over 1,000 youths between the ages of 14 and 21 found that “nearly 1 in 10 youths (9%) reported some type of sexual violence perpetration in their lifetime.” As summarized by Melissa Healy in the Los Angeles Times, disturbingly, “The study also found that perpetrators of sexual violence of all types were unlikely to accept responsibility for their acts. One in seven believed that he or she was ‘not at all responsible for what happened,’ and almost 4 in 10 said they considered the victim somewhat or completely responsible for the reported incident.”

Amid this sobering landscape, young adult fiction has been tackling the topic of sexual assault head-on. The Steubenville case inspired Aaron Hartzler, author of the memoir "Rapture Practice," about growing up gay in a religious family in Kansas City, Missouri, to humanize the story with his recently published novel "What We Saw." Like in the Steubenville case, there’s a party where teens are drinking, followed by rumors aplenty about sports stars possibly having assaulted a drunken girl—in this case, basketball players. There are photographs and video posted on social media, although some surface only to disappear quickly.

The story is told from the point of view of Kate Weston, who was at the party, and even had her photo taken with said drunk girl, Stacey Stallard, but left early, so isn’t quite sure what happened. She quickly finds that sides are forming among her peers, and her entire community, with very little effort going into finding out what truly happened. Her peer group is soon torn apart, especially when Kate refuses to go along with sentiments like her friend Christy’s that “Stacey went to that party looking for trouble.”

Like its inspiration, there’s a group akin to Anonymous that threatens to publish a video taken the night of the fictional assault. Hartzler homes in on both Kate’s growing skepticism of the handling of the case by the school, and the chasm that forms in the community in its aftermath, one that affects the entire town. Hartzler emailed Salon about his goals for the book, the feminist meaning of the story, and why parents of teens can’t ignore the topic of sexual assault.

Why were you inspired to fictionalize the Steubenville rape case?

As I watched the screaming match that Steubenville inspired on social media during 2012, I kept thinking about my youngest sister who was just graduating from high school. I wondered what it must be like to live in a small town like Steubenville and be coming of age in the middle of a national conversation about sexual violence.

So much of that early conversation was centered on how these allegations would "ruin the lives" of the perpetrators, with zero empathy for the victim. In the slut-shaming and flash-judgment that ensued on Twitter, the town of Steubenville became synonymous with an evil place, where evil people did and allowed evil things. I kept wondering about the kids who had been at that party who weren't directly involved—the ones who weren't aware that a rape had occurred, and only found out about it after the fact. The character of Kate started talking in my head at that point.

What kind of impact or reach do you think this novel will have with teenagers that straight news stories might not?

As the situation in Steubenville was reported, it increasingly became a larger conversation about rape culture. Writers like Lindy West and Roxane Gay tirelessly took the bull by the horns and helped us see how the sexism in our culture at large was so insidious and pervasive. This was an excellent thing, but it also took the focus away from the adolescent experience, and I was eager take this story and put it back in the context of a high school. It's my hope that the young people who read this book will relate more readily with a narrative that is less about abstract concepts, and more about watching characters they can identify with make choices they may have been or will be faced with themselves.

At its heart, "What We Saw" is a feminist story about a young woman who is learning to define herself by the courage of her own choices, and not the opinions of her friends, her family, her community or the news media. So often, when I talk to young people at schools or book festivals, the girls who ask a question or state an opinion will begin with an apology. "I'm sorry but..." The guys never apologize for sorting out what they think aloud. Kate is a character who must decide if she will speak up without apology, even when it means enduring the consequences and inevitable changes that will occur when she does so.

Do you have a goal or message with this book?

To tell a compelling story. I always approach writing from a character perspective. I believe that characters make choices, and those choices give you a plot. I didn't sit down to write an "issue book," per se. I wanted to write a book I'd want to read. I cried for a couple of the characters as I wrote them. I wanted to make their lives easier, but I couldn't. The major themes that emerged were the complicity in silence, and inevitability of change, both things that I didn't necessarily have a clear perspective on when I was a teenager. If there's a takeaway here, I hope it's the personal responsibility each of us has—at any age—to speak up for and defend those who can't defend themselves.

What kinds of reactions have you gotten so far from teenagers? What about parents, teachers and/or librarians?

The response has been overwhelmingly positive—especially from teenagers, but also from adults, who have thanked me for giving them a way into a conversation about these kinds of choices with their own kids. I've heard from teenagers who have experienced similar situations at their own school. I've been able to recommend other books that have tackled these themes recently as well, like Courtney Summers’ "All the Rage" and Jennifer Mathieu’s "The Truth About Alice."

This is Banned Books Week, and I'm sure some parents don't want to even think about their kids being anywhere near a situation like the one in Steubenville, much less talk about it. However, just because your child isn't talking to you about these issues, doesn't mean they aren't talking about them. If you want to be a part of that conversation, but don't know how to get it started? There are a lot of authors out there who have already done it for you.

Do you have anything else to add?

I've been asked several times if it was "a challenge" to write from a female perspective, and my response is that at the core of any good story isn't a "male" experience or a "female" experience. It's a human experience. I think we humans (of whatever gender or gender expression) are equals, and not so wildly different on the inside that one gender can't write from the point of view of a different gender.

Growing up gay in the middle of the country, every ounce of homophobia I ever experienced was firmly rooted in sexism. If calling somebody a "girl" is the worst put-down you can think of, then we have a problem culturally. It's something I love to talk to teens about, and hope that these conversations turn on a light, one reader at a time.