Talib Kweli, terror "threat": Why listening to a civil rights speech got him probed by the federal government

"They pulled me into a little secret room in the airport, and they started asking me questions" 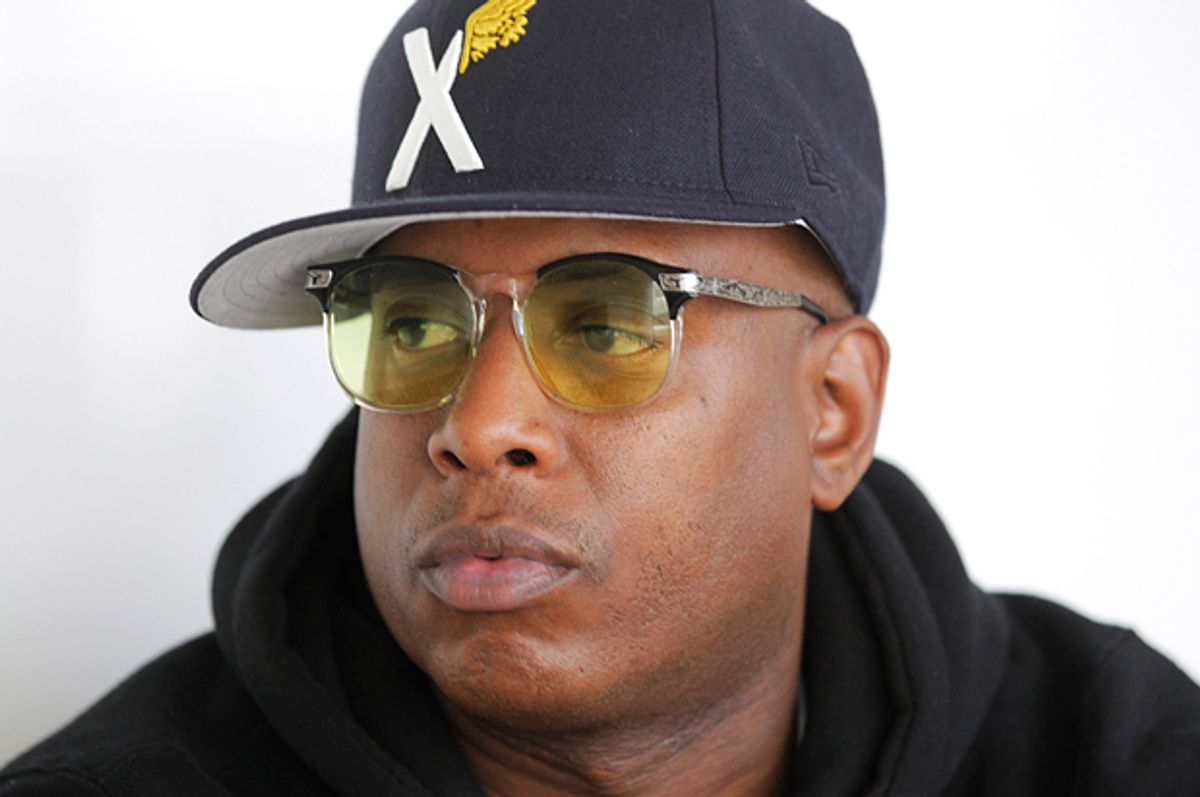 Brooklyn rapper Talib Kweli was, in 2002, riding high off two critically acclaimed early albums. He wasn’t quite a household name, but he was a superstar among hip hop heads and revered by fellow rappers--a quintessential “rapper’s rapper,” described by the Chicago Tribune as “more influential than he is famous.” Jay Z would shout Kweli out the next year on “Moment of Clarity,” in a rhyme that suggested a certain envy Jay felt for Kweli’s lyricism.

Kweli had arrived, ascending from the underground to the bright lights of concert stages across the country, and he found himself coursing through airports on the way to tour stops and recording sessions. As he plans to describe in the book he's currently writing, one fateful trip changed the way he thought about the government forever.

Talib didn’t think much of the first sign that he was marked. It seemed only a momentary inconvenience. The airline’s kiosk mysteriously rejected his credit card, forcing him to approach the counter for his boarding pass.

“I didn’t understand why my card wouldn’t work, so I went to talk to a lady at the desk,” Kweli told Salon by phone. “When I went to talk to her and she pulled up my name she looked worried. A look of worry came over her face.” Still, Kweli had no idea what was about to happen. Who could have?

“Then I felt someone tap me on my shoulder and I turned around.”

Anyone trying to catch a man in a busy New York airport benefits from his getting run through the bottleneck of the counter, a predictable spot where he can be anticipated and identified. So it was that Kweli found himself facing stern men in dark suits. “They looked like the Men in Black,” he recalls. “Come with us,” they said.

“You were listening to this speech,” the agents began.

This was about a year after 9/11, so you might expect at this point in the story that the speech that so worried the federal agents was by a Muslim radical. It’s no crime to listen to a bin Laden or al-Zawahiri speech, of course, but a man named Talib listening to a speech by men harbored by the Taliban might have aroused suspicion in the nascent Homeland Security apparatus. But despite his Arabic name, Kweli is not a Muslim, and the speech in question had nothing to do with the recent attacks on New York and Washington. (I only detour to explore that possibility to seek explanation for the interrogation, not a justifiable excuse; a Muslim listening to a speech by an Islamic radical would, again, be fully legal.) No, the speech in question had nothing to do with Islamic radicalism. In fact, it was a nearly 50-year-old, and quite famous, speech by civil rights leader Stokely Carmichael (later known as Kwame Ture).

Carmichael popularized the phrase “Black Power” upon leaving a Mississippi jail in 1966, his 27th such imprisonment in the fight for black freedom. Then the chairman of the Student Nonviolent Coordinating Committee (SNCC), Carmichael elaborated on this “Black Power” before a Berkeley crowd of 10,000 later that year, in a speech that would become canonical as the “Black Power” speech. Kweli remembers that a recording of the address may have been playing while he booked his flight over the phone.

“You were reported,” Kweli recalls the agents explaining in the airport’s hidden room. “Someone at JetBlue reported that they felt like you had some hate speech going on in the background when you booked this flight.”

“I don’t if someone from the airline reported it or somehow the phone I was using had some sort of tap on it,” says Kweli. “I don’t really know. But they knew I was listening to Stokely Carmichael.”

Then working on his debut solo album, "Quality," Kweli had collected a number of civil rights-era speeches that he wanted to include on the record, especially those of Carmichael. "I felt that my lyrics were very in touch with that era on that album,” he says. “Stokely was fiery, his rhetoric was fiery, his energy was passionate and intense.”

“It wasn’t something that struck me as extra-revolutionary when I was listening to it back in 2002,” Kweli continues. “It struck me as common sense. But I imagine in that era, Stokely was very scary to the establishment.”

Carmichael was still scary to the establishment in 2002, apparently. Scary enough to mobilize the FBI and TSA. Scary enough for them to order Kweli's plane grounded until the threat was investigated. Scary enough to produce a file on Kweli that shocked and angered the rapper in its invasiveness.

“Then they showed me some papers with information on it,” Kweli recalls. “It was names of people I hang out with and places I go often, and there was a lot of blacked-out stuff. My wife’s name wasn’t blacked out, and my manager’s name wasn’t blacked out. And they said, ‘Who are these people?’ I said, ‘That’s my manager, and that’s my wife.’ I said, ‘Why are you asking me about these people? What do they have to do with this?’ They said, ‘Well, these are the people you spend the most time with and that you travel with.’”

A point worth elaborating: There is nothing that can be reasonably called “hate speech” in Carmichael's address. There is nothing that could have been reported to authorities to warrant any action -- unless, of course, both the informant and the agencies were uneasy with Carmichael’s formulation of “Black Power,” which necessarily includes a critique of the United States on the way to a fuller condemnation of undue power in its many manifestations. It’s one thing for a conservative customer service representative to report what he or she feels to be scary rhetoric; it’s another for multiple federal agencies to react as though any semblance of a threat exists. The feds identified the speech and had to have found something in it to warrant the flight grounded and the passenger interrogated.

The speech reflects the broad turn made in the civil rights movement in the mid-sixties. It was then that Martin Luther King Jr., Carmichael and the SNCC, the Black Panthers and others--the whole of the civil rights movement, essentially--expanded their critical and prescriptive stances in 1966-67 to include economics, imperialism, and the institutional structures of domination and oppression, such as what we name now as "institutional racism." It was a sort of pedagogy of the oppressed: Black Americans, who knew dehumanization so well, were teaching a broad humanism to America. This meant building coalitions with poor whites and oppressed peoples across the globe into an anti-imperialist and anti-capitalist resistance. This pivot terrified the FBI at the time much more than the pleas for voting rights and access to public accommodations of the early 60s, and FBI Director J. Edgar Hoover launched his vast COINTELPRO (Counterintelligence Program) operation to “expose, disrupt, misdirect, discredit, or otherwise neutralize” figures like King and Carmichael and groups like SNCC, King’s SCLC and the Panthers.

Carmichael’s “Black Power” was simply an assertion of black worth and black rights that exist a priori in America, as a Jeffersonian “self-evident” truth, not as the hateful counterpart to the “white power” of neo-Nazis and white supremacists. Carmichael’s insistence was that black freedom did not truly exist as long as it was something given, something doled out, by the white power structure. “[W]e must dismiss the fallacious notion that white people can give anybody their freedom,” said Carmichael in the speech. “Black Power” was only the reformulation of fundamental American principles, just as the Black Panthers’ foundational document that same year concluded with a lengthy excerpt from the Declaration of Independence:

“We hold these truths to be self-evident, that all men are created equal…”

But what we might call that Black Americanism emerging in 1966-67 brought with it that which had been learned by black America under centuries of oppression: a reluctance to participate in white America’s various modes and domains of oppression. Dr. King’s axiom, that “injustice anywhere is a threat to justice everywhere,” was something of a guiding principle to Carmichael and the Panthers, with whom Carmichael became affiliated during that time. The proponents of “Black Power” brought an intense critique to bear on structures of power, whether they be racial, economic, imperial or gendered. Panther founder Huey Newton even led the group to a position decades ahead of most of the country on gay rights:

In his speech, Carmichael asks,

“How can we begin to build institutions that will allow people to relate with each other as human beings? [...]

"In order for America to really live on a basic principle of human relationships, a new society must be born. Racism must die, and the economic exploitation of this country of non-white peoples around the world must also die.”

But Carmichael cared for white people, too, who found themselves in relative powerlessness: “We're trying to organize poor whites...around the question of economic exploitation and political disfranchisement.” The imperial war machine then at work in Vietnam was yet another injustice at odds with Carmichael’s “new society”:

The speech, then, that so worried an airline employee and mobilized federal agents was not “hate speech” at all but, rather, a speech about love. It was about black love of self in a country that taught its citizens to hate and fear blackness; but that impulse to care for the oppressed self was almost immediately transposed into a care for poor and oppressed people generally, especially those victimized or exploited by the American empire, both domestically and abroad.

Kweli sees the same mistake in how many evaluate Black Lives Matter, which he has participated in since the Ferguson protests began, even before.

And yet Black Lives Matter is still seen as a threat to many, just as Carmichael was in 2002. How much has changed, then? Certainly things are better. Kweli’s treatment by the Feds would likely have been far more severe in the late sixties. Assassinations, beatings, political imprisonment and exile were the fate of many black freedom fighters. In the end, the agents were “polite,” Kweli recalls, and they courteously rushed him to his flight, held on the ground until the “threat” was assessed. But the post-9/11 conflation of threats is telling. So-called black “hate speech” animated the authorities as something foreign or other, when, in fact, the words of Carmichael were more American than the reaction to them.