The way we talk about mass shootings is completely broken 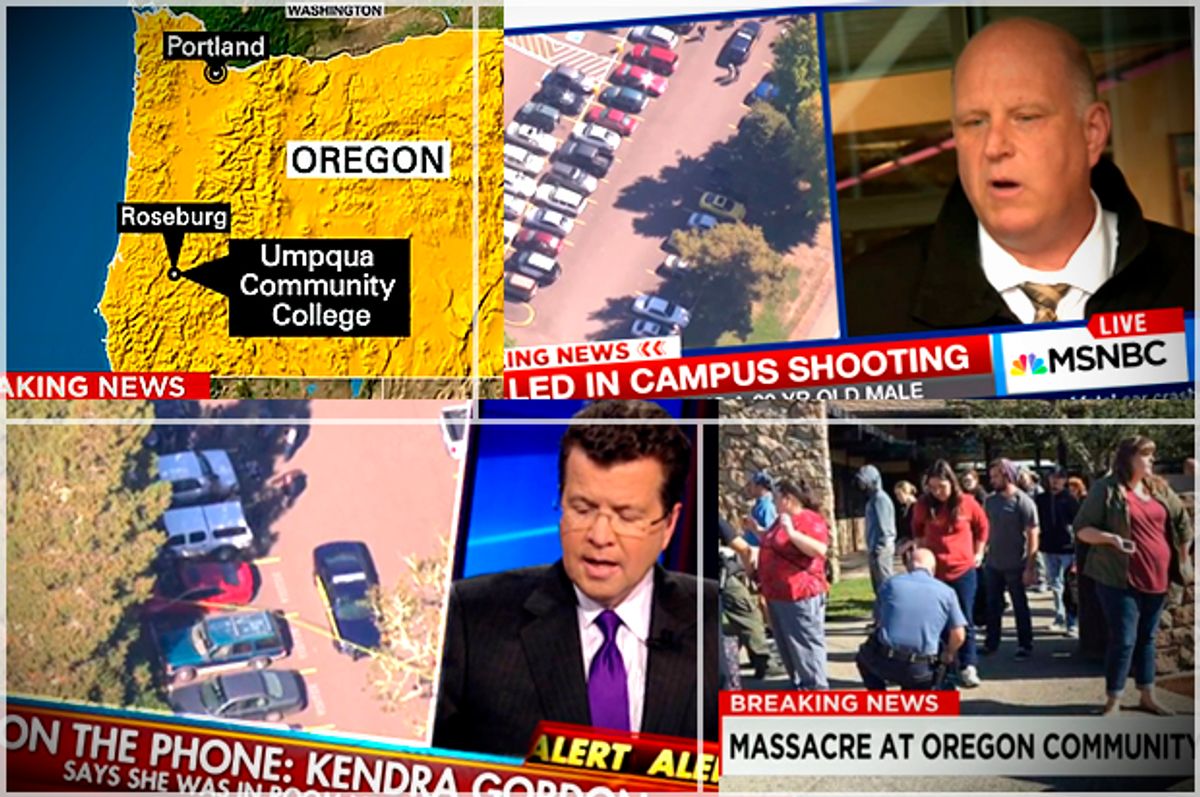 It has happened yet again: Someone has taken a gun to an everyday place—in this case, a community college in Oregon—and killed many people.

At this point, what more is there to say?

It should disgust us, as a country, as a people, that we have allowed routine mass slaughter to become background noise—something that can be accommodated, like the sound of passing traffic. We are averaging more than one mass shooting per day in the United States. Thursday's killings in Oregon were at least the 45th time someone has shot up a school this year. It should disgust us. But it clearly doesn't—or at least it doesn't enough. We have decided that all of that blood and trauma and grief is a price worth paying for—what, the right to hunt, or "tradition," or some other stupid, amorphous concept. We decided that we could handle the murder of everyone from little children to 87-year-old women. Again: what more is there to say after that?

Everything about the way we deal with gun violence has become broken and useless. We go through the same despairing dialogue time and again. The patterns have become unbearably etched in our collective consciousness. We all know what to do so well that it's almost sick, perverse. Let's check Twitter. Let's turn on CNN. Let's trade the statistics. Let's beat our fists against the wall. Let's ask ourselves how many times this can happen before we do something. Let's link to that one Onion article. Let's harangue each other for mentioning the shooter too much. Let's call for gun control—or, if we're the NRA, demand that we not talk about gun control. Let's seethe about the NRA. Let's shed a tear for the victims, and for their families. Let's look at pictures of the candlelight vigil. Let's shake our heads. Let's write a piece about how there is nothing more to say until we find the tools to say something different. And then, let's move on, and leave the people whose lives have been torn apart to pick up the pieces while we latch onto the next thing.

If you have ever experienced loss, you will know that jarring sense of dislocation that comes when you emerge from the cocoon of your grief and step out onto the street. That the world continues to turn feels almost offensive. What is wrong with these people that they're not as broken as you? This is forgivable on a small scale. We can't expect the planet to stop for our individual problems. But it's unforgivable on a national scale, when the body count piles ever-higher. We should have a collective sense of grief, a collective sense that only the acknowledgement that something is terrible and the demand that we change it will do. Anything less is utterly worthless.

There is seemingly no optimism to be found in this situation. The only available scrap of hope that there is to latch onto is that things change. Things are impossible until they are suddenly possible, and then they become unstoppable. If you beat your fist against the wall enough, maybe the wall starts to crumble. We are nowhere near there with guns. We're pathetically, despicably, ruinously far away. But things change. In the end, that is about the only thing there is to say.