"Reforming schools should not be a proxy for reforming society," educator and journalist Megan Erickson tells Salon 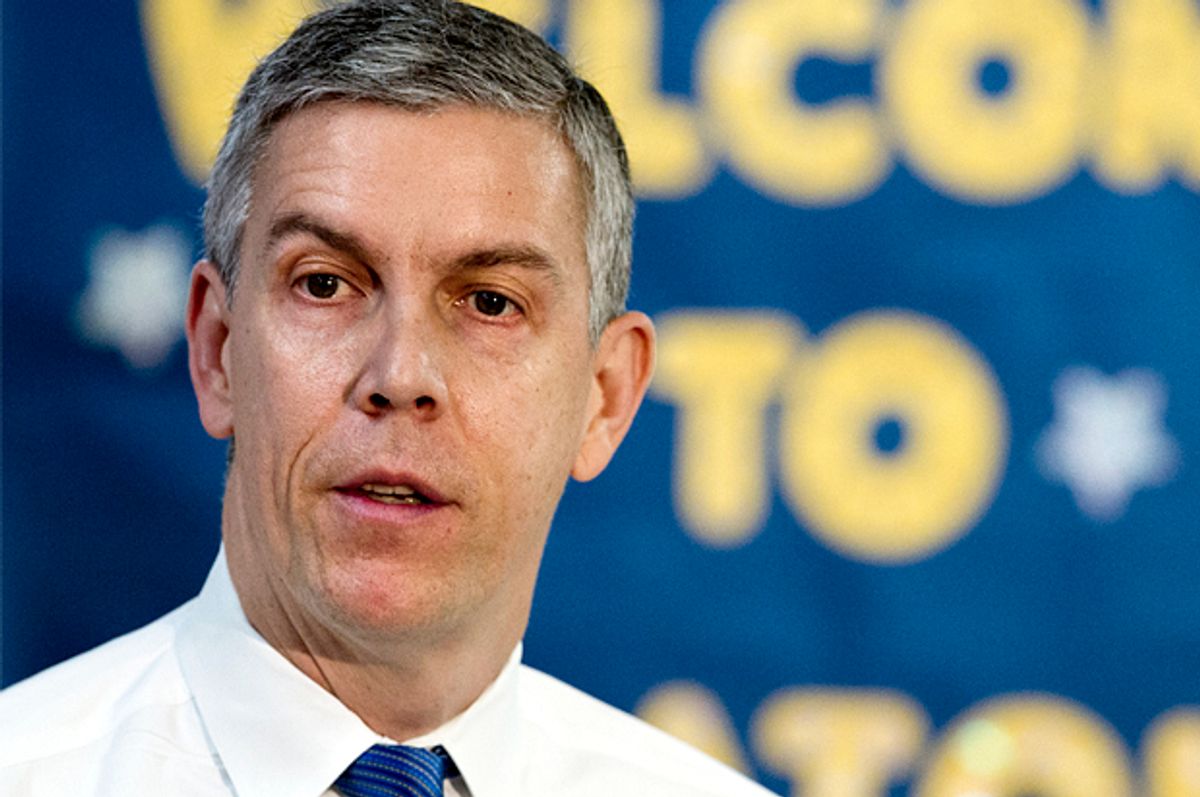 In keeping with a long Washington tradition of announcing less-than-good news at the end of the week, when many journalists are operating at three-quarter-speed (due to hangovers or laziness), the Obama administration announced on Friday that Arne Duncan, President Obama's old hoops buddy, who the Washington Post once called "the most powerful education secretary in U.S. history," was stepping down from the Department of Education. He was one of the precious few original members of the administration still standing. It had been a long seven years.

Duncan is leaving the DOE in a politically awkward position; it is currently a target of abuse from both the Tea Party right and the populist left. But as Politico's Michael Grunwald recently detailed — in a profile of Duncan that now reads like a first draft of his legacy — that's been true for the Duncan-era department essentially since Day One. Consummate progressive technocrat that he is, Duncan has always been drawn to top-down solutions, regardless of whether the politics made sense. And for nearly an entire presidency, it seemed to work.

Lately, though, it seems that the education reform movement that Duncan has so conspicuously embraced has lost some momentum. While many of the changes spurred by "Race to the Top" won't go away any time soon, there's at least some evidence to suggest that, as a political force, the education reform movement, which has never had major grassroots behind it, may have peaked. And if the next president is teachers' union favorite Hillary Rodham Clinton, it's even possible that some of the measures undertaken by Duncan and supported by reformers may be reversed.

If that's the case, there will be plenty of folks who won't be crying. And one of them will be Megan Erickson, the educator, journalist and author whose new book "Class War: The Privatization of Childhood" was released by Verso Books last month. Using her experience as a teacher for a foundation, Erickson subjects not only the education reform movement but much of modern childhood itself to a leftist analysis. Her conclusions suggest that while figures like Duncan are part of the problem, if the goal is to shield childhood from neoliberalism as much as possible, then defeating reformers isn't enough.

Recently, Salon spoke with Erickson over the phone about her her book, Arne Duncan, the education reform movement and how neoliberalism is changing our very understanding of childhood's purpose. Our conversation, which can be found below, has been edited for clarity and length. (Disclosure: I am a fan of Jacobin, where Erickson serves as an editor, and have previously written two posts for the magazine's blog.)

So where did this book come from?

I got my master's degree teaching at Columbia University at Teacher's College. I student-taught 9th and 10th grade at Stuyvesant High School. Then I taught at the Young Woman's Leadership School Network; and I actually had a great experience there.

What I saw in the schools really dismayed me; just the general atmosphere of pressure and standardized testing. At the same time, I was living in Greenpoint, so I would see kids running from the YMCA all the time. They were playing, they were learning music and getting outdoor experience in the park — they were having fun. It was the way teaching should be, as opposed to the kind of punitive, "metal-detector" atmosphere that I saw in a lot of schools.

All of which is a long way to say that I joined the YMCA, running a nursery school and after-school program, and one of my roles was working with parents who were applying with their kids to kindergarten.

Your point of view shifted from the supply side to the demand side. So were you counseling the kind of parents who are convinced that their kid won't get into Harvard unless she gets into the right kindergarten?

I was working with parents from a lot of different class backgrounds. The pressure on parents — from the top echelon of income earners all the way to the bottom — it struck me really profoundly; the weight of their decisions, and feeling like they'll have a huge impact on what your kids are able to do later in life; that was something I  heard constantly repeated by parents.

Also, at the same time, I saw a lot of articles that were being written as if there's this secret thing that we're not supposed to talk about — but we're going to talk about! — and it's that "we" hate parenting. And I thought: Maybe it's not parenting you hate. Maybe you don't regret  becoming a mother or a father, but parenting is not fun anymore.

It can be a major source of anxiety, in fact.

One thing I found out when researching this book is that the term “helicopter parent” was first used in the late '80s. I think it's no accident that that coincides with when “A Nation at Risk” was published, and there was this paradigm shift to the idea of childhood as a time of preparation for adulthood.

How early does that process start, do you think? Once kids enter into school? Or before even that?

There've been tons and tons of great books on education, but what I wanted to add to the conversation was that this really starts from early childhood. It's everywhere.

So what's an example of kids — and, almost as importantly, their parents — being socialized to see themselves as on their own in a really competitive market?

I write in the book about the $10 million industry [for luxury early childhood products] that has arisen seemingly out of nowhere. All of a sudden, people see the Bugaboo stroller on “Sex and the City” and they're putting down one thousand dollars for a stroller. That search to give your child an identity with the Stuart Weitzman shoes for babies, to have them communicate class at such a young age; I think it reflects the larger pressure toward survival in capitalist society.

We all know, for example, about the whole "helicopter-parenting" culture. My question was, is it something that happens just among upper-class families? Or is it a real trend that more people are spending more on privately funded after-school activities for their kids? Studies have found that it is true. Spending on those types of things has increased dramatically.

And then, of course, kids ultimately do end up in school and competing, which for a lot of people is symbolized most immediately by standardized tests. Why do you think standardized testing has become the lightning rod of the education debate?

Testing is sort of like metonymy: a symbol for an ideology of education. It's a very specific way of looking at education that goes back to the turn of the century. What we have are classrooms designed on an industrial model of production, where knowledge is the product and the "human capital" is the students. You start school as a child, but you come out as a fully-formed adult who is socialized and ready to succeed in the workplace. So the teacher's directing everything, and the student is the passive recipient of knowledge.

Right. And then they have to, in a sense, "transfer" that knowledge from the teacher to the standardized test. The industrial nature of public schooling is pretty clear, and I get how focusing so much on standardized testing is, among other things, a kind of reinvestment in that model. But what's a different way to do it?

An alternative vision of schooling, which is promoted at schools like Sidwell Friends and all of the prestigious private schools — whether they call themselves "traditional" or are coming from a more progressive model — is: small class sizes, individual attention, group discussion and a liberal arts education. It'd be impossible to do if you followed what former Mayor Bloomberg said is his ideal system of education.

He's influential within the reform community, too. What does he envision?

His system would cut the teaching force in half, expand class sizes and just pay teachers more — as if they were managers of a classroom as opposed to guides and mentors and active participants with kids.

Sticking with the theme of lightning rods, Politico's Michael Grunwald recently wrote a profile of now-outgoing Department of Education Secretary Arne Duncan, and one of the big takeaways of the piece is that Duncan managed to unite the left and the right — in opposition. Do you have a theory to explain this particular kind of bipartisanship?

Education creates very odd coalitions in America, and it has throughout history. Conservatives who are opposed to the Arne Duncan package of reform generally oppose national curriculum. They do that because they’re coming from the states’ rights perspective, which obviously has pretty deep historical roots in the United States. (That’s one reason why it was such a surprise that No Child Left Behind was a bipartisan piece of legislation.)

Even if the reformers have a lot of enemies, though, it seems to me that they have an argument at their disposal that is, politically, very effective. It's basically the same argument neoliberalism makes on economic policy, which is there is no alternative. So how do you answer the inevitable question of what you'd do instead?

I think that’s a really important question, and what I try to do with my own book is to not just critique but also move forward. I don’t think that exists in the form of a detailed policy outline brief yet. So much of that will be done through praxis, through conversation with teachers, children and parents — together. I would say the next step is transforming schools into places where kids learn to be critical thinkers. They learn what the system is and how you cheat it, change it.

Because it’s not enough to go back to what schools were before No Child Left Behind or "A Nation at Risk." One of the fundamental arguments of my book is that we can’t address the problems going on in our schools without addressing what’s going on in our societies. And reforming schools should not be a proxy for reforming society — because they’re kids. They just want to play and talk to their friends; they want to have recess and art class. There’s so much control over their lives, and they're kids.