There are rules in my bar — Yes, even you, who called yourself the Angel of Death

There are two kinds of New Yorkers: Those who work in service, and those who do not. We must all show kindness 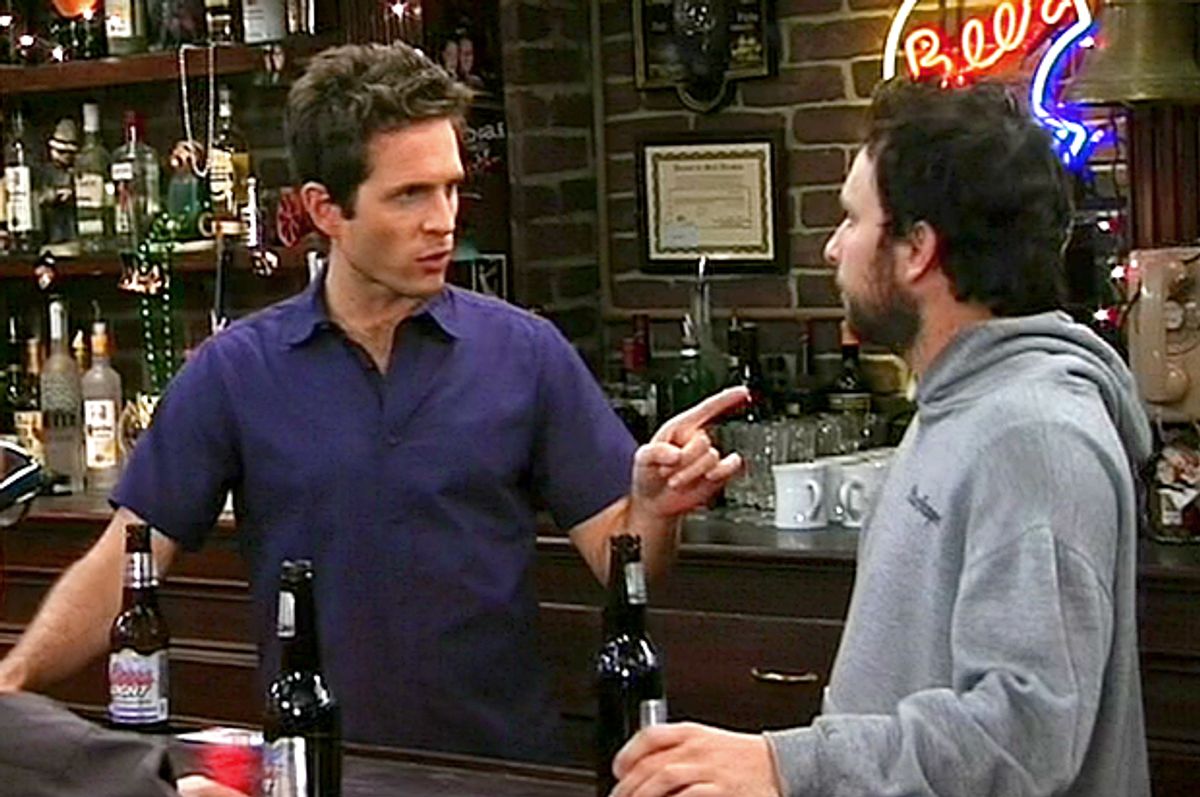 There’s a sign taped to the mirror behind the bar where I work in Brooklyn that says, “Be nice or you’ll get the boot.” (To animate its message, the sign is in the shape of a boot.) Some customers notice it, point it out, have a laugh. Others don’t. Still, it’s as good a declaration of this particular bar’s ethos as any—and once in a while, when I sense intimations of aggression, if someone starts getting out of line, I point to it, smile, and repeat aloud what it says. It usually breaks the tension in the room. This is a good-natured, friendly place, this little neighborhood bar in a gentrifying but still relatively modest part of Brooklyn, in the fuzzy borderlands between Park Slope and Sunset Park near Green-Wood Cemetery. We don’t want any trouble here. We want everyone—and that includes you—to make nice, to make friends, and have an easygoing, no-pressure $3 Miller High Life, $3 shot of Evan Williams good time.

And the happy truth is: Most people here are nice. I love my job. In my four years behind this bar, only a few incidents have given me real grief, and those have been extreme, anomalous cases. Once, a raving madman, jacked up to his eyeballs on speed, sweating through his T-shirt, came in, ordered a shot of whiskey, didn’t drink it, and proceeded to pace the length of the almost-empty bar enumerating, in a loosely coherent monologue, the many conspirators arrayed against him: The Bloods. The Crips. The Hollywood establishment. Old friends who’d betrayed him. The Brooklyn Academy of Music. Then he became eerily still for a moment, as if finding the quiet center of his self-made storm, looked me right in the eye, and told me that he was the Angel of Death. “You were kind to me when I walked in,” he said, “and you will come to regret that kindness.” Suddenly, it felt like a siege. It took a long, tense time to get him out of the bar. But he was wrong: I don’t regret whatever kindness I showed him. That’s what I expect of all bartenders, and what I wish for from all customers.

Like many bartenders, I’ve been propositioned from time to time in uncomfortable ways. I’ve had to intervene more than once when male customers have bothered uninterested women customers. And, sure, sometimes I’ve had to cut people off and give them the boot—but nicely.

There are innumerable ways to be not nice in a bar, and mostly they’re not extreme. They’re about manners, assumptions, and ways of asserting power and control. It’s everyday stuff: seemingly small, constant reminders that there are two kinds of New Yorkers: those who work in service, and those who do not.

SO, WHAT ELSE DO YOU DO?

I had a friend in college whose dad, an Italian immigrant, tended bar at a beloved old-school Italian restaurant on Manhattan’s East Side for decades. Many of his regulars were character actors, some regularly seen in the films of John Cassavetes. (Maybe that’s irrelevant, but I just like Falk and Gazzara and Cassavetes.) Anyway, the man, my friend’s father, made a good enough living behind that bar to buy a nice house in a nice New Jersey suburb, and put two children through college.

I like to think those actors tipped well. Something makes me suspect they did. But good tips alone don’t pay mortgages and tuition. It may seem as though bartending is now a more respected office than ever before, but I don’t think that’s true. As taste in drinks has become generally more sophisticated, tending bar may require special skills, and it may have acquired some cultural cachet, but my sense is, for all that, it used to be more professionalized, and pre-tip wages reflected that. Tending bar was once regarded as a real job, a way to make a living without having to make a living many different ways, as so many bartenders do now.

I doubt that anyone ever asked my college friend’s father what else he did, or what his real job is, but I’ve come across very few bartenders now who haven’t been interrogated in this way. Most weeks, I’m asked at least once what else it is that I do. In the years since I returned to bartending after a long absence, I’ve had some good luck as a writer. My memoir was published. I write a column for a newspaper. But I still bristle at the question, and hesitate before answering. Partly because I think “What do you do?” is never the most interesting question one might ask someone they’ve only just met. Partly because I’m as surprised as anybody that I wound up with another career that’s working out OK, and that wasn’t always true for me, and it hasn’t been true for many other bartenders I know, irrespective of their talent and ambition, so it’s a matter of solidarity. Partly because I think bartending is an excellent occupation in itself, and I’m uneasy with the assumption that it can’t possibly be enough. (Sometimes I do tell them that I’m a minister, which is also true—I was ordained as an Interfaith minister in 2002, and have served as a Red Cross chaplain—even though I hardly consider it my job, because it generates pretty spectacular reactions, and because it pleases me to consider the ways in which bartending so often feels like a kind of ministry.)

My friend Susan, who was possibly the greatest bartender I’ve ever had the pleasure of watching, learning from, and being served by, probably handled it better than I did. She’d just make shit up, and have fun with it. “When people asked me, ‘what do you really do?’ I would laugh so hard.” I can just hear that laughter—it was one of the many joys of drinking when she was behind the bar. “I would say things like, shshsh, but I work on the corner of 43rd and 9th. I was a sheepherder by day. I was a nun. A ditch digger—just for the exercise.”

Other bartenders’ responses and reactions sound more like my own. I returned to bartending at forty, after more than fifteen years away from it. I’d never really thought about getting behind a bar again. But when the owners of a then-new, cozy, unfussy bar in my neighborhood asked if I’d give it a shot, it felt like a blessing. I was recently widowed, still mourning. That loss—and the two sad and stressful years during which my husband had been sick with a very rare type of cancer—had made me retreat, close ranks, and isolate myself. I think the bar’s owners knew that, and offered me a shift as a kind of mitzvah, an act of kindness, a way to get me out of my apartment and out of the worst depths of my sadness. It couldn’t put an end to grieving—nothing can, save time—but it helped. At least one day a week, I had to wake up, shower, brush my hair, and talk to people. I hadn’t been doing much of any of that since Frank died. Doing work that was physical and social—unlike writing, which is sedentary and solitary—turned out to be just what I needed. But that felt like more story than any customer wanted to hear when they asked what else I did. What was I going to say? Write and mourn?

We all have our reasons for winding up on the working side of the bar, and a certain kind of customer always wants to know what they are. Christy left a career in advertising in Boston because she’d always dreamed of living in New York. Advertising jobs weren’t easy to find after 9/11. Instead, she got a gig at a bar in Tribeca, and discovered that she liked it, a lot. (It was at my favorite place, the much missed Liquor Store bar. I remember it largely as a peaceable drinking kingdom, with a great mix and range of regulars, where fun and politesse reigned.) “I looked back only when pegged by a shitty conversationalist—a suit wandering in accidentally or some other arrogant overachiever —with the question, ‘So, what else do you do?’ That would send me reeling into a shift-long panic attack, or self-doubt. Over and over again.”

But mostly it isn’t arrogance or self-importance that compels bar patrons to ask this question. Evan, another former bartender, hated “the assumptions people made about my life—that I must be in school, or had been laid off from a real job, that I was nomadic.” But he quickly adds: “The curious were well intentioned, I assume.” And I believe that, too. I recently had an argument about this with a curious, well-intentioned friend. We’d just had lunch together, and agreed that our waiter was funny and charming. “I wish I’d asked him what else he did,” my friend said. I told her that it’s probably best she didn’t. That the question, regardless of how kindly one asks it, is often unwelcome, and sometimes even makes people feel bad. Would you ask a teacher what else she did? A banker? An editor? It’s a question only asked of those of whose jobs seem to many others to be transient, temporary, somehow less than substantive.

Excerpted from "Tales of Two Cities: The Best and Worst of Times in Today’s New York" edited by John Freeman, published Sept. 8, 2015 by Penguin Books, an imprint of Penguin Publishing Group, a division of Penguin Random House LLC. Copyright by Rosie Schaap, 2014. All rights reserved.