Team Bush argues they're built to go the distance in the primary, but that won't matter if Jeb has nothing to offer 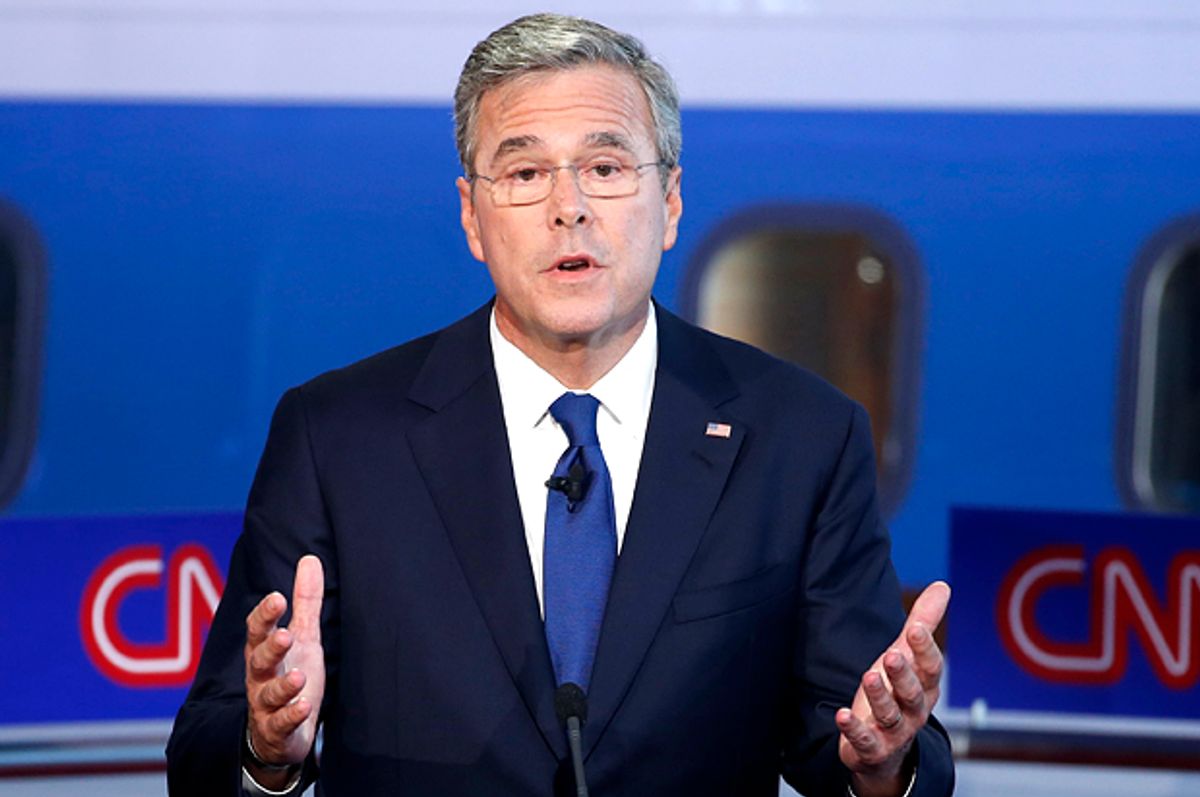 The Jeb Bush “Don’t Panic, Everything Is Fine” campaign is up and running. With his poll numbers in decline, Jeb is rolling out endorsements and assuring reporters that he’s meeting fundraising targets and will have plenty of money to take the Jeb 2016 machine all the way through the primary season. The arc of Jeb’s campaign is following a very Bush-like trajectory – he started the nominating contest with a “shock and awe” strategy of winning the primary early by scaring off all other pretenders; now he’s fighting off an unexpectedly resilient insurgency and promising that everything will work out in the end because he’s prepared to, ahem, stay the course.

To justify Jeb’s continued presence in the race, his campaign is making the argument that Bush’s path to victory is to wait for all the other candidates to fade or implode, which will clear the way for him to win the nomination through attrition:

But Bush's financial team and strategists argue that he should now be judged by a different benchmark. Their mantra: He's built to last. Using phrases like "go the distance," ''marathon" and "long haul," they argue that the former Florida governor is uniquely positioned to outlast other candidates, regardless of the fundraising number he posts for the third quarter.

It’s not the worst strategy ever devised – that’s basically how Mitt Romney won the nomination in 2012. But Romney had the benefit of running in a field stuffed with dopes and jokers who had no business running for president. He could outlast people like Newt Gingrich and Rick Santorum because they were unserious candidates who never really posed any threat to Romney’s establishment support. Jeb doesn’t have that luxury. Right now he’s digging up oppo on two candidates who could conceivably siphon away his donors and establishment backers: Marco Rubio and John Kasich. And while Romney was viewed as “good enough” by conservatives, those same voters have made it pretty clear they have little respect or patience for another Bush.

That helps explain why Jeb, in the latest poll out from Pew, pulls in an absurdly low 4 percent of the Republican vote. That’s a worrisome enough sign for Jeb’s campaign, but when you dig into the poll’s internals, you start to see just how much trouble Jeb is in.

Let’s start with comparing Jeb’s numbers to those of front-runner Donald Trump. The Donald is pulling down 25 percent of the Republican vote, powered in large part by the anti-immigrant sentiment that is dominating the Republican electorate. According to Pew, 66 percent of Republican voters say immigration is “very important” when deciding whom they’ll vote for in 2016, and 43 percent of Republican voters are more likely to support a candidate who promises to deport every undocumented immigrant in the country. Trump – who has made immigrant-bashing the hot, angry core of his campaign – is the runaway favorite among those voters. Jeb, who is a relative moderate on the issue and preaches tolerance for immigrants, barely registers among this group.

More worrisome for Jeb is the Republican electorate’s disdain for what is supposed to be his strongest selling point: his experience. According to Pew, just 29 percent of GOP voters say it’s more important for their candidate to have “experience and a proven record” than “new ideas and a different approach.” Jeb does relatively well among these voters, trailing only Ben Carson(!) among all the candidates. But for the 66 percent who favor “new ideas” over experience, Jeb is barely an afterthought.

That’s why this “we’re built to last” spin from Team Jeb comes off as pretty empty. Of course candidates are going to drop out as the primary season rolls on, but what reason do Jeb’s people have to think that voters will ultimately coalesce around their guy when there’s little indication he has anything the Republican electorate is looking for? Having sufficient money to compete doesn’t really do you much good if no one is willing to vote for you.

But, as it turns out, Jeb’s team has an answer for this as well – he just has to figure out how to get people “excited” for the Jeb experience. As CNN’s Maeve Reston and Dana Bash report, Jeb’s donors and establishment backers have a few ideas for how to make Jeb seem a little more dynamic:

"The base of the conservative Republican Party has a great field to chose from. Bush has not been able to excite them," said David McIntosh of the Club for Growth.

Prominent Bush backers and members of his finance team say Bush will wear well on voters over time. A few have suggested tweaks: encouraging Bush get a new pair of eyeglasses, for example.

New glasses! What a concept. If we’ve learned anything from the 2016 Republican race, it’s that there’s nothing like a hot new pair of frames to repair a wounded political brand.