Mike Huckabee dismisses gun violence epidemic: "We have not so much a gun problem, we have a problem with sin and evil"

"Gun crime gets most of the attention," Huckabee argued, because of sensational media coverage 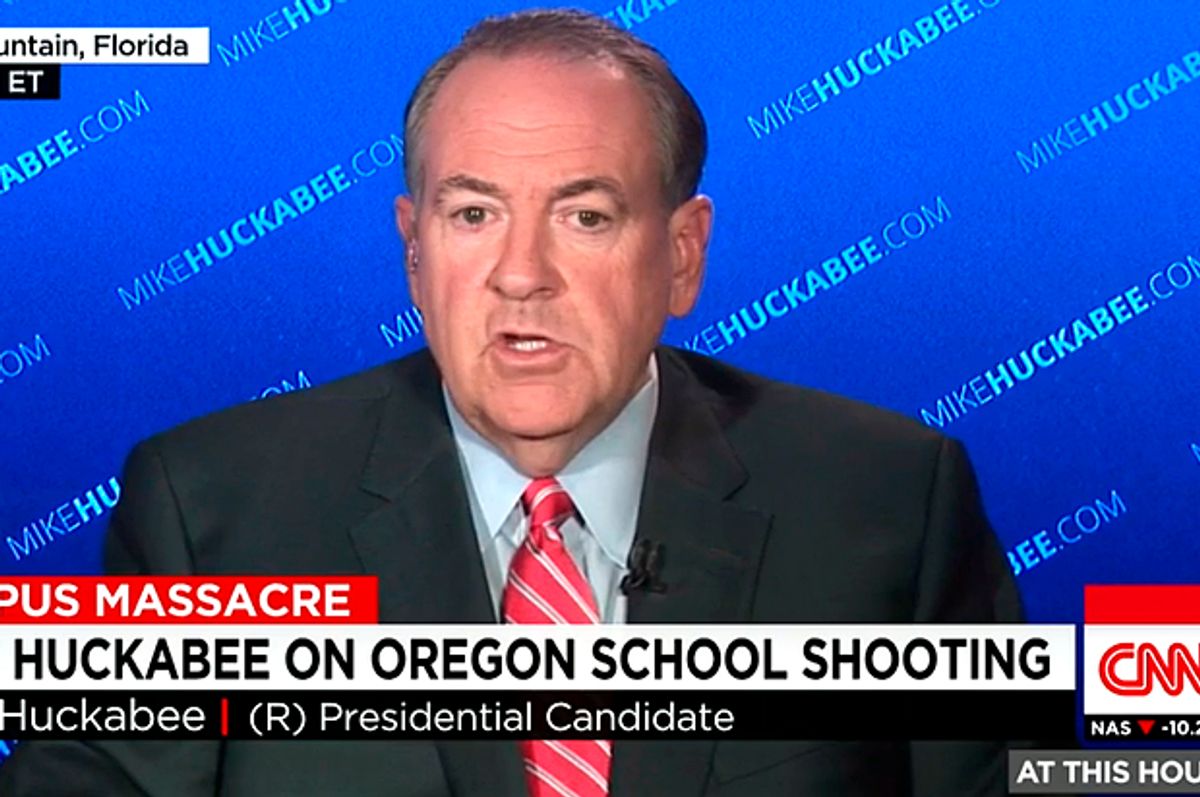 While it may not be exactly "stuff happens," Republican presidential candidate Mike Huckabee's response to America's latest mass shooting essential boils down to murder happens in all manners, so let's not focus on guns.

“We always talk about what the weapon was, but whether it’s a pressure cooker or whether it’s a gun, we’re dealing with people who are either deranged or they’re very focused because they want to kill people in the name of terrorism,” Huckabee argued during an interview on CNN's "New Day" on Monday, discussing last week's shooting at Umpqua Community College in Oregon.

The 26-year-old shooter stockpiled 14 guns in his apartment.

"We have not so much a gun problem, we have a problem with sin and evil,” the former Arkansas pastor declared, insisting that a rush to discuss gun control measures in the wake of America's 294th mass shooting in 2015 was misguided.

Huckabee, like nearly all of his Republican rivals, twisted to simultaneously express condolences for an event that has become all too commonplace in American society while at the same time shrugging off its prevalence.

“There is no law which prevents people from doing things that are violent. There are a lot of crimes that nobody sees coming until it’s too late," Huckabee offered before arguing against gun-free zones.

“Every one of these shootings happened in a gun free zone,” he said, referring to school shootings. “We can say we’re going to have more gun free zones but that ends up being the worst thing because it just gives the shooter real confidence that he walks into that environment and he’s the only one armed.”

"How do we move forward thinking that we can send our school and that this won't happen," a frustrated Alisyn Camerota pushed Huckabee.

There have been 45 school shootings in the United States this year alone.

"Well, the fact is," Huckabee began, "sending your kids today is much safer than sending my kids to school thirty years ago when they went. It's a safer place," he insisted before blaming the 24-hour new cycle for creating a heightened and reactionary sense of fear.

So much for his earlier argument that gun-free zones have made schools less safe.

“Seven hundred people a year get killed because somebody beats them up with their fist,” Huckabee later observed. “We don’t make a big deal out of that because there’s a lot of people that get killed in a lot of ways, but a gun crime gets most of the attention."

“We could stop most of the car wrecks if we restricted speeds down to 25 miles per hour. There would be very few car accidents if no care was allowed to go faster than 25 miles per hour," Huckabee offered to push-back against tighter gun restrictions.