My iPhone is ruining my life: I'm guilty of "phubbing" my partner, and I can't unplug

He asked me how long I could go without my phone, and my first thought was, "But why?" 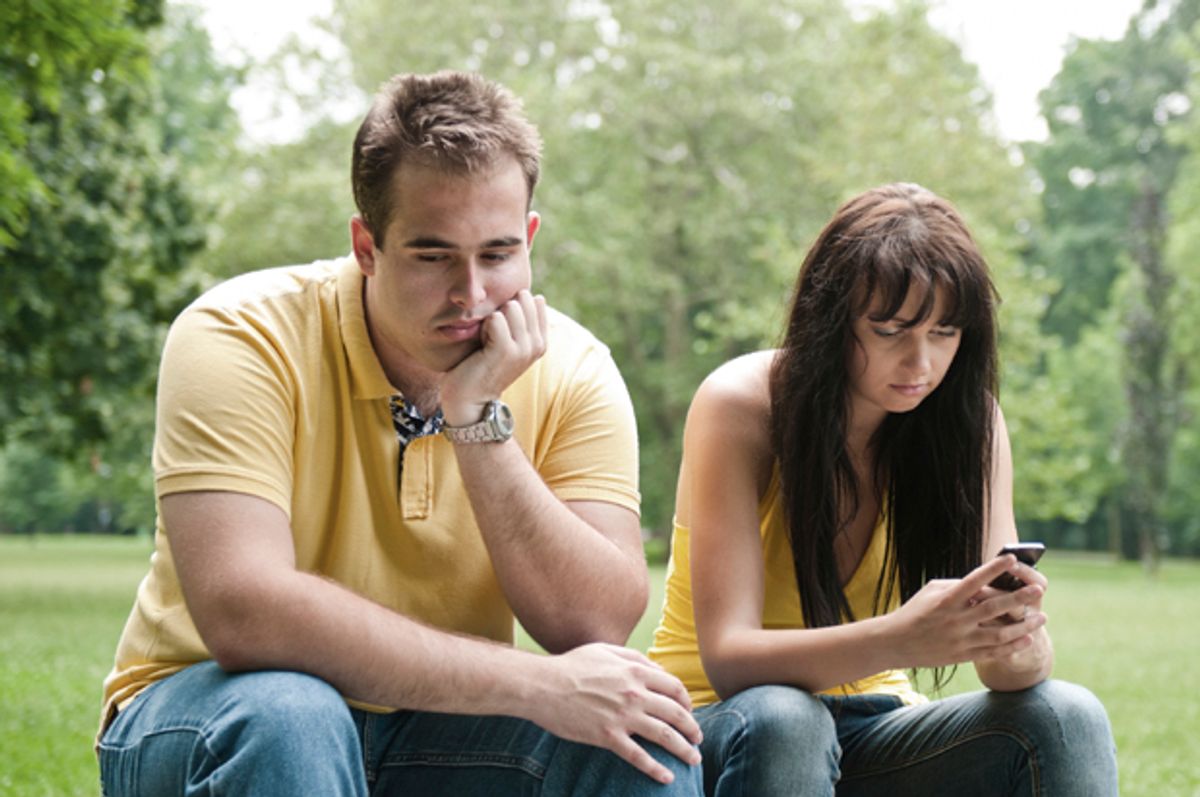 If my boyfriend and I ever break up, it will probably be because of my cellphone. My incessant staring at my iPhone has caused more fights between us than any other topic. Yes, I admit it, I’m a phubber, a phone snubber. According to a study in the journal Computers in Human Behavior this is a major problem. “Partner phubbing (Pphubbing) can be best understood as the extent to which an individual uses or is distracted by his/her cell phone while in the company of his/her relationship partner.”

I took a quiz at Health.com to find out whether phubbing is ruining my life, and got a resounding yes. I answered in the affirmative to most of their statements, such as “During a typical mealtime that my partner and I spend together, my partner pulls out and checks his/her cell phone,” “My partner keeps his or her cell phone in their hand when he or she is with me” and “My partner glances at his/her cell phone when talking to me”—but I’m the partner in this case. The latter is an accusation my boyfriend told me just last week was hurtful to him—yet it’s hard for me to stop.

I could blame my job, but that wouldn’t tell the whole story. As a freelance writer who pitches story ideas to my editors, part of my workload involves researching what’s happening this very second, and trying to be among the first to come up with a unique idea around it, the oft-maligned “hot take.”

But in addition to that responsibility, scrolling through my inbox and Facebook updates makes me feel connected to the world around me. When I don’t check my phone for a few hours at a time (which I admit rarely happens, save for when I’m sleeping), I start to wonder what’s happening in those spaces when I’m not looking. Perhaps it’s a type of scarcity mentality—if I’m not available to respond, or at least, absorb, the latest emails or status updates, I fear that I will never be in the loop, or that friends and editors will stop contacting me if I don’t get back to them immediately.

My need to know has only increased since I moved away from most of my closest friends, trading Brooklyn for New Jersey in 2013. Whereas I at least used to see my friends in person occasionally, and might run into them, and got social engagement by my daily coffee shop visits, I now spend 90 percent of my weekdays home alone, which I admit is often lonely. Being connected online helps. I now find out what my friends are up to primarily through social media, rather than chatting with them in person. So yes, I’m snubbing my boyfriend who’s sitting on the coach with me, but I’m not actually trying to be anti-social. I’m attempting to be a good friend by checking out baby photos and seeing what everyone else is eating/thinking/doing.

My boyfriend asked me recently how long I could give up my cell phone for. Rather than give him any quantifiable amount of time, I sat there thinking, Why would I want to do that? While I do understand the impulse to temporarily unplug, the idea of doing so on a regular or extended basis unnerves me. It’s not just that I fear I’d miss out on writing jobs; it’s that I fear I’d miss out on life. I realize as I type those words that “life” does extend beyond the internet, but it can easily feel like it doesn’t, especially when there’s always one more thing I want to see or read or check online. I even used my phone during a recent weeknight movie date. I allowed myself that taboo activity by telling myself I just wanted to briefly check my email, but the truth is, there’s nothing that couldn’t have waited two hours.

This isn’t a new social phenomenon. In 2013, a “Stop Phubbing” campaign by Australian graduate student Alex Haigh gained traction. According to Time, “Though the movement’s website is decorated with faux statistics–like ‘92% of repeat phubbers go on to be politicians’–his message addresses people’s real tendency to stare at phones like they’re going to produce winning lottery numbers.” The same article highlighted a University of Essex study on mobile phones’ influence on face-to-face conversation quality in which researches found that phones “may inhibit relationship formation by reducing individuals’ engagement and attention for their partners, and discouraging partners’ perceptions that any self-disclosure had been met with care and empathy.” Ouch.

Just this week in The New York Times, "Reclaiming Conversation" author Shelly Turkle urged readers to engage in “whole person conversation,” the kind that involves you and another person or people, not you, a device, and human beings. “[I[f things go quiet for a while you look deeper, you don’t text another friend. You take the moment to read your friend more closely or look at something you haven’t attended to before. Perhaps you look into her face or pay attention to her body language. Or you simply allow the silence,” she advised. In an earlier Times piece titled starkly “Stop Googling. Let’s Talk.,” Turkle summarized the status quo as “These days, we feel less of a need to hide the fact that we are dividing our attention.” I agree that not only is phone use rampant, we aren’t trying to hide it. Why would we, when almost everyone around us is doing the same thing?

Another trick I’ve conned myself into believing is that I wasn’t being rude because I read interesting tidbits to my boyfriend while I’m perusing my phone. While this is sometimes true, I know, because he’s told me, he’d rather have my undivided attention than know about whatever story du jour I’m sharing with him.

I admit that I sometimes welcome hanging out with friends where we both feel comfortable whipping out our phones should the need arise—and I’m using a very loose definition of “need.” We are able to simultaneously have conversations and use our phones without either party feeling snubbed, because we’re engaging in an act of seamless multitasking. I truly believe that kids growing up now are going to find ways to incorporate their technology use into their daily conversations and other tasks in ways that aren’t socially awkward.

I admit I do have a problem, and plan to try my best to wean myself away from being glued to my phone beyond the workday. Yes, it provides plenty of conversational fodder, but at the expense of making my partner feel neglected, which is too high of a price. If I don’t respond to your email or Tweet for a few hours—or ever—you’ll know why.