“Saturday Night Live” dares to ask: What if Hillary Clinton really is likeable? 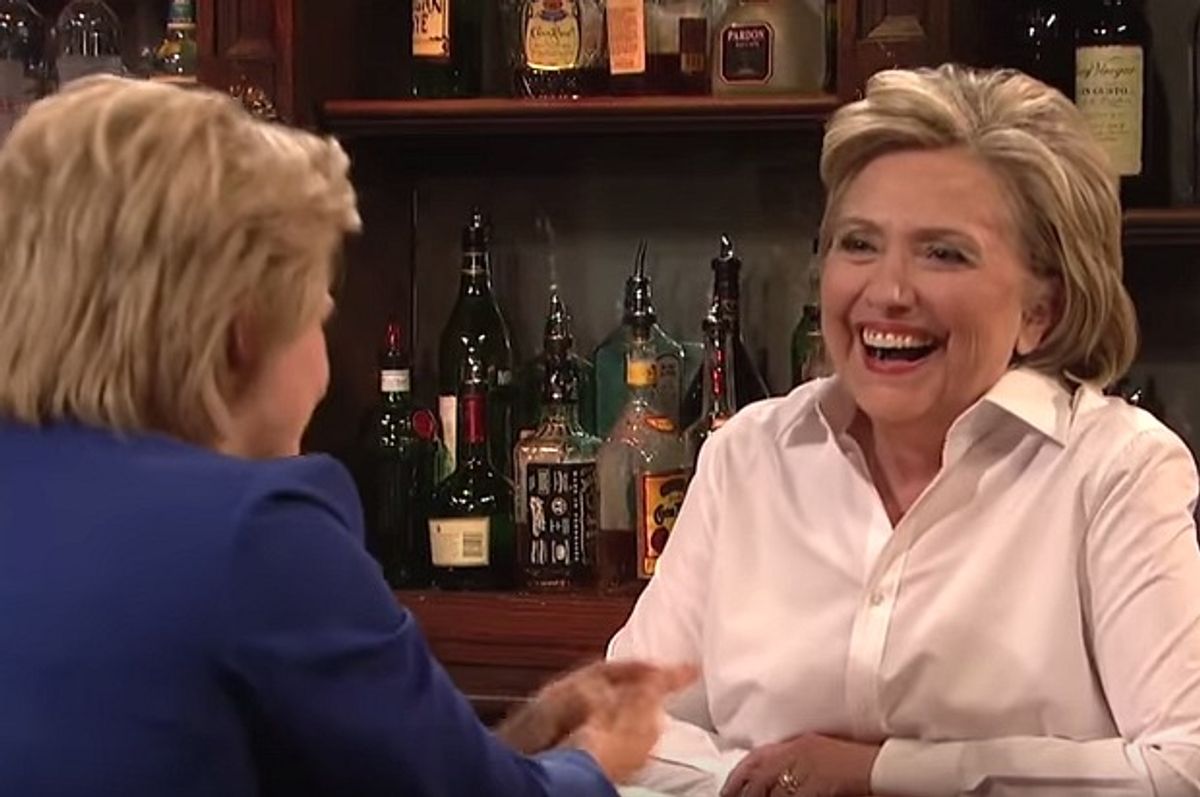 If Hillary Clinton does not have a sense of humor about herself, she certainly knows how to convincingly feign one. On Saturday night, the Democratic presidential candidate made an almost-surprise cameo on the season premiere of NBC’s late-night variety show “Saturday Night Live,” as a bartender named Val. This was only funny because Val showed up in a sketch where the show’s brilliant Kate McKinnon was playing, well, Hillary Clinton, in a royal blue blazer and short-and-sensible wig. Just as Clinton confronted Amy Poehler, in Clinton-costume, in 2008, “Val” was Clinton's bartender in a dingy little dive where a few young people in the corner were having a loud discussion about which Republican presidential candidate they were going to vote for. Both women existed somewhere in between their characters and their real selves in the sketch, which was almost entirely where the humor came from. (McKinnon, as Clinton: “I could have supported gay marriage sooner.” Clinton, as Val: “You supported [gay marriage] pretty soon.” The openly gay McKinnon, with a little grimace: “Mmm, coulda been sooner.”)

When McKinnon takes on Clinton’s persona, the result she produces is typically manic, and Saturday night was not much of an exception. McKinnon’s Clinton drank copiously, hallucinated the existence of another person, and groused about young people to her aide (Cecily Strong, playing not just any aide, but specifically, Huma Abedin). As James Poniewozik wrote in the New York Times: “McKinnon’s impression has been the toughest ‘S.N.L.’ has done of Mrs. Clinton in her long political career,” one that does not laud Clinton for her ambition but instead derides her for her avarice. McKinnon’s Clinton is desperate and power-hungry, driven a bit mad by constantly being passed over. Clinton’s fatal flaw is caring too much—the diametric opposite of cool, confident, or “likeable”—and McKinnon mercilessly skewers her for it.

On Saturday night, though, McKinnon seemed more aware of the reasons for why Clinton comes off as so ambitious and impersonal—and accordingly leaned into them. McKinnon’s Clinton was the embodiment of frustration and despondency; perhaps unhinged, but sympathetic, too. After the episode’s celebrity host, Miley Cyrus, told her “friends” that she was supporting Carly Fiorina so that the country would get its first female president, McKinnon’s Clinton had a face of contorted, desperate rejection. And while the caricature-Clinton faced a dark night of the soul, “Val,” behind the bar, was the willing listener, the sociable companion, the person you could literally have a beer with. It could have been a (weird) scene from “Cheers,” as Clinton’s “Val” was ever so delicately forced to confront her own public image, in the form of hammy, shoulder-padded McKinnon. It was remarkable to see Clinton step outside of her political persona for a few minutes to address the public’s golem of herself. And seeing Clinton as Val look at McKinnon as Clinton forced the audience to confront that image, too.

As I wrote earlier this year, the specter of Clinton’s possible presidency has haunted Hollywood’s portrayals of political wives and female candidates ever since she was an embarrassed First Lady. Movies and television have imagined a broad emotional palette for the inner workings of Hillary Clinton, a woman with an imperfect marriage who aspires to public office. (Indeed, just last night, “Madam Secretary”’s Clinton stand-in, played by Téa Leoni, ascended to the presidency through some line-of-succession drama. It appears to be unfathomable to elect a woman, but not so difficult to place her in the Oval Office.)

McKinnon’s caricature is another interpretation of Hillary—perhaps less lurid, but also, with more license to name names. (In the sketch, McKinnon and Clinton were joined by Darrell Hammond reprising his famous Bill Clinton impression, albeit just for few seconds. He appeared terrified by the multiplicity of his wives, and quickly fled the scene.)

It was not, obviously, the funniest sketch that “Saturday Night Live” has ever produced. It wasn’t even the funniest sketch in that episode. (The cold open, with Taran Killam and Cecily Strong as Donald and Melania Trump, would be my vote.) Any sketch with a cameo who isn’t used to comedy is going to suffer from poor execution, and in this case, whoever was holding the cue-cards made it worse, by holding them at what appeared to be a really inconvenient angle for Clinton’s sightline. But hiccups aside, the segment stuck with me. It cut through a lot of lingering bullshit surrounding the conversation around Clinton—primarily, what my colleague Andrew O’Hehir has termed “Hillary panic,” which is:

"the same deep-rooted sense that no one anywhere on the political spectrum is all that comfortable with Hillary Clinton, and that the more closely people look at her, the less inclined they will be to elect her president. You can argue that this is untrue or unproven, and you can say that it’s not really Clinton’s fault, and that Hillary panic is a product of tide and circumstance. But the perception is widespread. […]You do not have to like Hillary Clinton or vote for her to agree that she is a highly qualified presidential candidate in conventional terms, but even that is problematic these days."

Clinton in the media often becomes this built-up figure of scandal, this collected pastiche of individual horrors. Clinton in the flesh—on “Saturday Night Live”—was, to use McKinnon’s words, “surprisingly nice in person.” Lest we forget, “likeability” is a rather broken concept.

I don’t know how much impact Hillary Clinton’s appearance on “Saturday Night Live” will have. But I do know that it was directly addressing her most dogged political handicap—a severe lack of chill about wanting to be president. America being a strange place, it doesn’t do for the candidate to want it too badly. I think all the credit Clinton was hoping for, by going on “Saturday Night Live,” was that of a good sport. Clinton came to play, and I don’t mean that in the metaphorical way. Unlike her defensiveness in the 2008 campaign, when she radiated entitlement for the nomination, this time around Clinton is a lot more chilled out about the whole thing. Maybe she’s actually enjoying herself; maybe being a grandmother really has deepened her appreciation for what she already has accomplished.

And maybe she’s faking it. After all, Clinton wants the presidency so bad that she’s trying to appeal to the young and hip through various entertainment avenues—“The Tonight Show With Jimmy Fallon,” Lena Dunham, Refinery29, and of course, “SNL.” But McKinnon coming around—albeit while in character—might also be a harbinger for other young people coming around. Perhaps it is Clinton’s perseverance in the matter. Perhaps it is her sense of fun with it, in the irreverent space of studio 8H. Perhaps Clinton is the only reasonable choice, in the era of Trump and Fiorina and Rubio, as cast member Pete Davidson argued on “Weekend Update.” Kevin Fallon at the Daily Beast concluded that “Saturday Night Live” essentially endorsed Clinton with the sketch, and I don’t think he’s wrong; the 2007 sketch that seemed to essentially endorse Barack Obama, in 2007, featured the then-senator in a cameo and mocked Clinton, played at that point by Poehler. The timing is almost too perfect; it’s as if after years of thinking the worst about this person who just really wants to be president, “SNL,” and the audience, is slowly becoming impressed with just how badly she wants it. For once, that insatiable desire is turning out to be an asset, not a curse.