The "Today" show exposes the media's most asinine Hillary meme: Why their "likability" fixation misses the point

Clinton won't win by getting people to love her. You wouldn't have known that from her "Today" interview 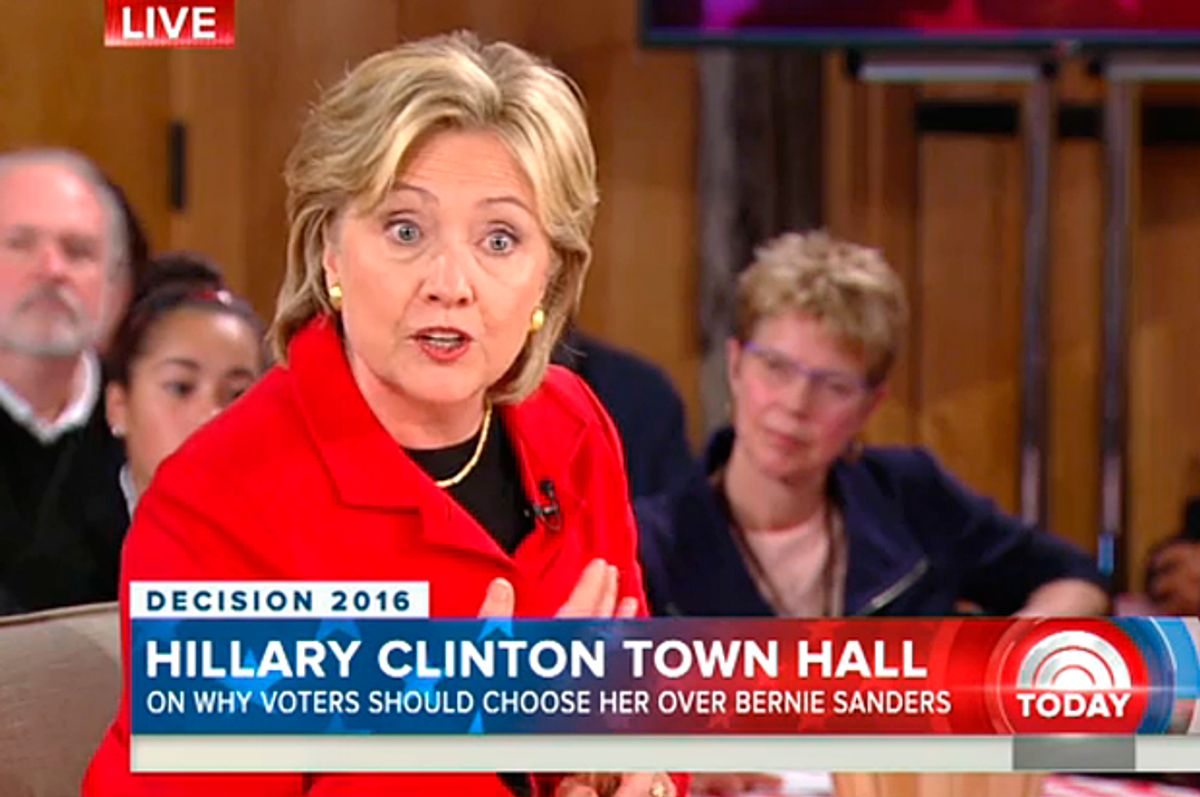 "It's not the nicest question to hear," Hillary Clinton said almost despairingly on Monday, after NBC's Savannah Guthrie asked her if she was having trouble "connecting" with people.

No, it isn't. To watch Hillary Clinton parry with the press is to witness one of the chilliest ballets in modern political history. There is simply nothing to be done about it. There will never be the nicest questions for as long as Hillary Clinton is actively involved in partisan politics, and Hillary Clinton will never — not for a second — be delighted to field the nasty questions that do get thrown at her.

Now, it's not Savannah Guthrie's job to ask Clinton nice questions. Despite the ostensible fluffiness of her role on the "Today" show, she can be one of the more tenacious and unsparing interviewers on mainstream TV news, and, at the start of a "Today"-hosted town hall in New Hampshire, she admirably went straight for Clinton's jugular. However. Would it be such a crime to ask these very powerful journalists if they could spend the precious minutes they are given asking candidates questions about something other than their polling numbers or why they are loathsome? Guthrie drew blood repeatedly, but she did so mostly by asking about why Clinton was so inauthentic and unlikable. Nearly all questions of policy were left to the audience members who surrounded the two women.

The most interesting question came from an Iraq War veteran who asked Clinton why he should trust her to avoid being captured by the military-industrial complex (surely the first time in eons that that phrase has appeared on the "Today" show) given her hawkish background. Clinton answered that her experience with Iraq and at the State Department has made her very cautious about war and peace. She then totally contradicted this assertion by calling for deeper American involvement in Syria. Guthrie, given the chance to follow up, failed to note the discrepancy, or to quiz Clinton about her history as perhaps the least militarily cautious member of the Obama administration. Another opportunity lost.

The moment people will talk about, the moment that fizzed over so much that the folks in the NBC control room must have jumped for joy, came in the middle of a lengthy Guthrie interrogation about — what else? — Clinton's emails. She must by now consider her decision to keep a private email address to be one of the worst ones she's ever taken. Watching her deploy her poker face while Guthrie asked if she understood how bad the emails looked, it was almost possible to see a glint of existential ennui in her eyes. There is literally no answer that she can give, no tone she can employ, that will satisfy either her critics or the many journalists who have seized on the emails as a shorthand way to harness people's hostility towards her. If she is contrite, they will attack her contrition. If she is angry, they will attack her anger. She must, instead, endure and try to keep her cool.

That cool deserted Clinton, however, when Guthrie asked if she would have gone after Republicans who were as shady with their emails as she was with hers.

"I would never have done that," she said, her voice rising sharply. "Look at the situation they chose to exploit, to go after me for political reasons! The death of four Americans in Benghazi!"

It was a bit hard to know what to make of the exchange. Clinton has obviously seized on the blunder made by the possible next Speaker of the House, Kevin McCarthy — whose gloating about the damage the House committee on Benghazi has caused her has landed him in hot water — as possibly the only political lifeline she is going to be given on this issue. Will it make any difference at all? Opinions about her are so polarized and hardened that it's impossible to say. You could see her anger as righteous fury about the politicization of Benghazi, or as fury about the attacks that she's been forced to weather thanks to the emails that the Benghazi committee uncovered. She's either the undeserving victim of a smear campaign or an arrogant insider trying to protect her secrets. Or both. Take your pick.

By the end of the "Today" town hall, everything was as it has always been when it comes to Hillary Clinton. She is not going to win the presidential election by getting people to love her. She's going to win it by hook or by crook, by hoping that Republicans have so thoroughly wounded themselves that none of them can win, by grimly and doggedly working her demographic advantages. And every step of the way, a crowd of reporters will be there, asking questions that are not so nice. 'Twas ever thus.