This is how the paranoid right keeps America armed to the teeth: The lies & distortions they use after every massacre 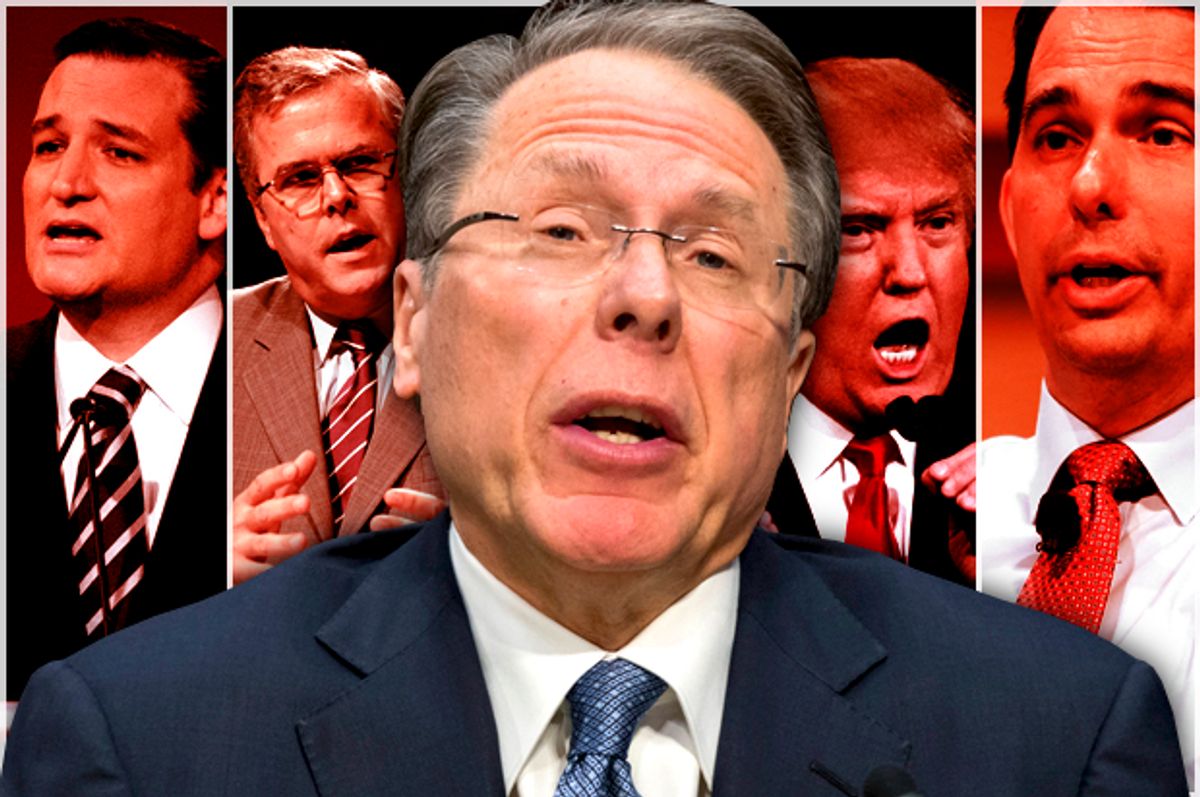 There has been another mass shooting in the United States -- and though American Exceptionalism is in many ways a myth, in terms of the number of times that guns are used to kill multiple people, the country is exceptional in its appalling rates of gun violence.

Christopher Harper-Mercer's massacre at Oregon's Umpqua Community College is just one more installment in an ongoing American tragedy. This most recent event will likely have the same (non) resolution as the events that preceded it. Despite the fact that the majority of the American people want reasonable and sensible gun control policies enacted, nothing will be done, because the National Rifle Association and its lobbyists have American democracy in a chokehold.

While talking about the mass shooting in Oregon, President Obama was visibly frustrated and upset by having to (again) discuss mass murder committed by someone armed with multiple guns. Obama knows that (like most presidents before him) he is impotent before the gun lobby.

(Obama may be one of the most powerful men on planet Earth, possessing the ability to wage war and launch nuclear weapons to immolate a target of his choice, yet there seems to be little if anything he can do to stop wanton gun violence. Obama can issue the order to kill Osama bin Laden, but somehow he is unable to deter America’s gun lobby.)

Ultimately, despite what the United States Constitution may read, “We the People” has in fact been subverted by “We the Gun Fetishists and Gun Lobby.”

In the Age of Obama, the United States is highly politically polarized. A culture of illusion, spectacle and fantasy reigns supreme. To that end, rabid right-wing ideology has possessed and corrupted the rational thinking of many millions of Americans. Therefore, the Republican Party is no longer acting as a responsible party in government that is invested in “normal politics.”

Authoritarianism is increasing its pull on American political life—especially among conservatives.

As a function of this dynamic, the Republican 2016 presidential candidates have offered up a human zoo of delusional thinking on a wide range of issues including nativism and racism, Planned Parenthood and women’s reproductive rights, the economy, the faux “Benghazi” scandal, global warming, the separation of church and state, and international relations.

Mirroring that dream world, the right-wing media, led by Fox News, will distort, obfuscate and misrepresent the facts about Thursday’s mass shooting in Oregon.

Pursuant to historian Richard Hofstadter’s worries about the “paranoid style” in American politics, and Goebbels’ principles of propaganda, America’s right-wing media will seduce its public with the following distortions and lies about the real and true nature of things surrounding Christopher Harper-Mercer’s accused mass murder of nine people in Oregon.

In the days to come, Thursday’s mass shooting in Oregon will reveal the intersection of conspiracy theories, Hofstadter’s “paranoid style,” a right-wing propaganda machine that is devilishly effective in duping its public, as well as Henry Giroux’s analysis of the influence of the culture of cruelty, austerity, and neoliberalism on contemporary American life and society.

Ten people are dead in Roseburg, Oregon. There is something horribly amiss when this can be described as a good thing for the Republican Party’s 2016 presidential candidates.

But alas, this tragedy primes the fears and anxieties of paranoid and fearful authoritarian voters, feeds the “War on Christians” narrative, and is red meat for movement conservatives who instead of responding to mass shootings with human empathy and reason about smarter gun policy, instead decide to hold their guns even closer to their hearts and groins.