Carly Fiorina, please get over yourself: No, liberal women aren't surprised that anti-feminist women exist

Fiorina is just the latest in a long history of anti-feminist women. Her outrage and her gloating makes no sense 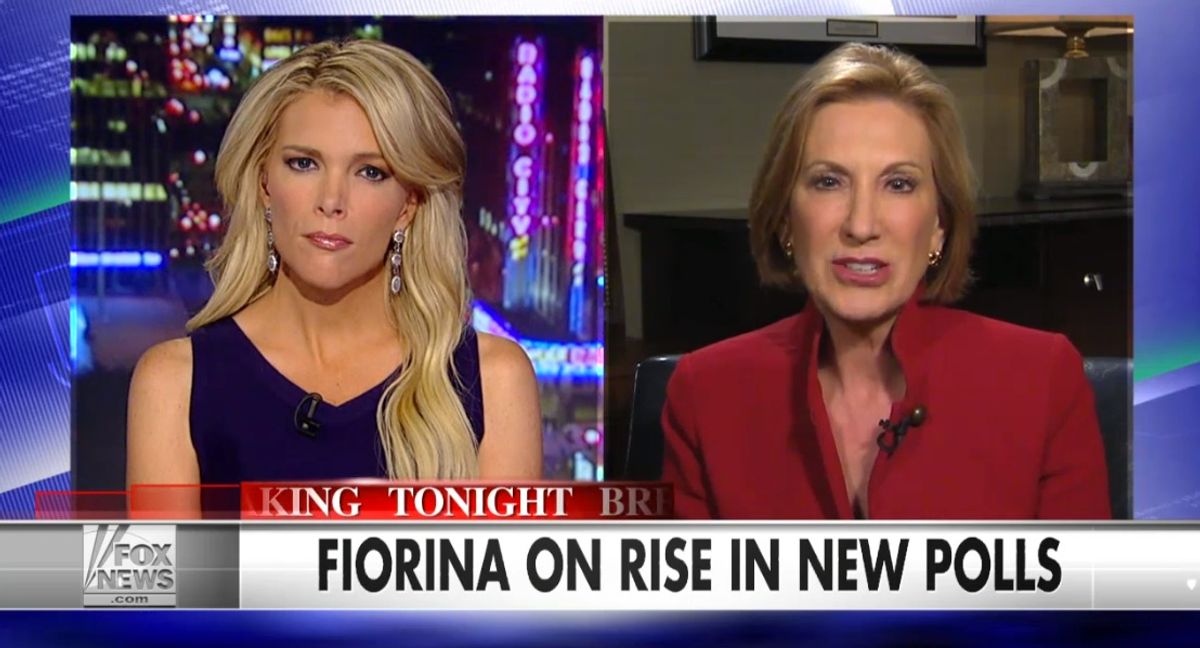 The main theme of Megyn Kelly's Monday night interview with Carly Fiorina was outrage that the mainstream media thinks it's acceptable to investigate the background and claims of Republicans running for office. But the second, perhaps equally important theme, was making sure Fox News viewers were aware that Fiorina really gets those liberal ladies mad!

"We know that most of the media is very liberal, and we know that liberal women have trouble accepting that there are many, many women who don’t agree with them," Fiorina gloated.

And then, in true right wing demagogue fashion, she switched immediately to whining. "And, in fact, it's liberal women, unfortunately, who believe that unless you follow their orthodoxy, Rachel Maddow is one, but Hillary Clinton is one as well. I mean, she is the one who said, about Joni Ernst, when Joni Ernst was running for the Senate, she said, well, it's not enough to be a woman. You have to be a woman who believes. And then she went through her litany of liberal orthodoxy."

Previously, Fiorina had a habit of accusing Clinton of playing the "gender card" and trying to get people to vote for her on gender and not on merits. Now she's mad at Clinton for saying you should vote for candidates on their merits, not on the gender. It's hard to keep up. I guess the rule here is that everything you do is wrong, as long as you're a liberal and a woman.

Just as confusing is Fiorina equating "liberal women" with the "mainstream media". In the reality, women, liberal or not, are underrepresented in the media, both as journalists and as sources. But that Fox News would like to imagine that the "mainstream media" is a bunch of carping ladies who can't stand a little competition from the conservative sistren isn't too surprising. It does seem that the target audience for conservative media is bitter men still angry at their ex-wives. Of course they're going to indulge the fantasy that liberal women are confused and outraged over the existence of Fiorina.

But the blunt reality is that there's nothing new or particularly surprising about Fiorina's career. Since there has been feminism, there have been ambitious women who gain power and social esteem by bashing feminists. The deal struck between anti-feminist women and sexist men has always been the same: The women will put a female face on anti-woman sentiment, and, in exchange, sexist men will will be allow them the freedom and power that would be denied to all other women.

The most iconic example, of course, is Phyllis Schlafly, an ambitious woman who built a career telling other women that their ambition was unfeminine and their place was in the home. She was able to ride the conservative desire to hear women bash feminism into a place in history, by successfully organizing the movement to defeat the Equal Rights Amendment.

But Schlafly is hardly the only one. During the 19th century, many women joined the anti-suffrage movement, creating public careers for themselves speaking out against women having the vote and in favor of relegating women to limited roles as housewives. As Susan Faludi documented in her book Backlash, being a woman who bashes other women became a cottage industry in the 80s, a way for women in the religious right to have high-powered political careers while preaching the importance of women living restricted, domestic lives. The juxtaposition created some moments of comedy in an otherwise depressing book, such as when Faludi visits Beverly LaHaye, who was then the spokeswoman for the anti-feminist organization Concerned Women for America.

Now, the anti-choice movement has embraced a similar strategy, putting women in leadership roles so that they can repeal the rights of other women, rights that women need in order to have the same career opportunities that anti-feminist women claim for themselves.

It's not a great mystery why the conservative movement prefers female spokespeople for anti-woman ideas. The image of a bunch of angry white men ganging up on women is a bad look, as was demonstrated by the ugly display at last week's congressional hearings on Planned Parenthood, where a bunch of men kept interrupting Planned Parenthood CEO Cecile Richards and reminding the public of the sexist contempt that drives the anti-choice movement. Putting a woman out front can help deflect accusations of misogyny and give credence to whatever cover story conservatives are trotting out to justify sexism today, whether it's "life" or "family" or "tradition". That's been true for almost 200 years now. Carly Fiorina is just the latest in a long line of women who cynically exploit the need for a female face on the anti-feminist movement for their own power and gain.