Hulu's new comedy is reminiscent of "Transparent" and "Togetherness," but isn't quite there yet 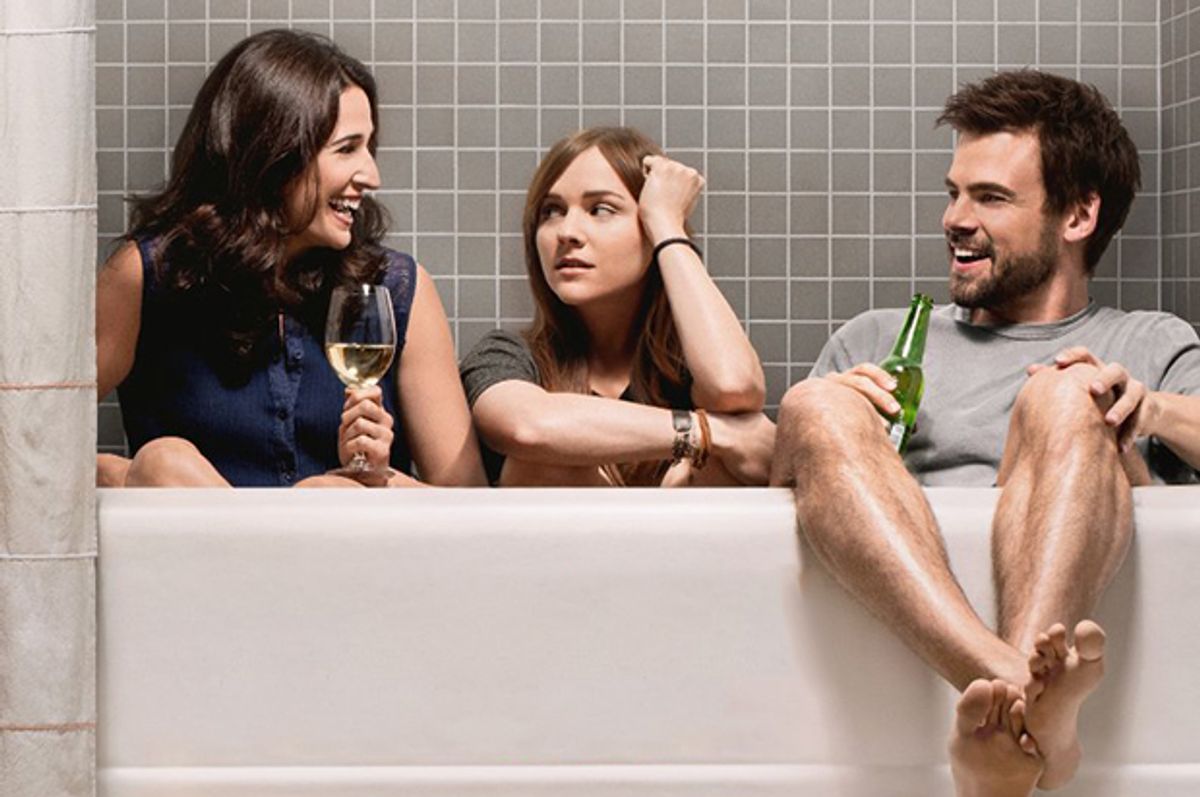 In the first episode of Hulu’s new original series “Casual,” debuting Wednesday, a man stumbles out of bed in the middle of the night, trying to shake off a bizarre dream. He leaves his companion in bed—a woman he picked up the evening before, who will disappear as soon as she wakes up, though she doesn’t know that yet—and leaves the bedroom, perhaps to get a glass of water. He doesn’t make it far, though. His somewhat incredible Los Angeles house—one of those brilliantly designed structures that seem to be built in the hopes they will make it into a movie—has several plate-glass windows at the back, overlooking the backyard, which includes a hot tub. A teenage couple is having sex in the hot tub—his hot tub. As he watches, they switch positions. The girl has long hair and a nude bra. He considers this for a moment, and then returns to his bedroom.

It takes a few minutes to become clear, but the man—Alex (Tommy Dewey) is in fact the girl’s uncle, and her recently divorced mother is asleep just down the hall from Alex and his one-night-stand. Sixteen-year-old Laura (Tara Lynne Barr) is not too bothered by her uncle spotting her; after all, the next morning, she teases him for the exploits of his previous night, as the one-night stand in question slips out the door. And though her mother, Valerie (Michaela Watkins) might be a little less aware of Laura’s sex life, she’s got plans for the evening that are just as strangely intimate: She and her brother Alex have both made first dates, online, for the same restaurant on the same night. Alex makes a point of telling Valerie how excited he is about tonight before she and Laura leave for work/school.

You’d be forgiven for being a bit confused about the family dynamics. I spent the first few episodes wondering why it looked like the endgame of “Casual” was for Valerie and Alex to fall in love with each other. The show’s defining element—that of a very intimate family trying to get their lives together, mostly by being very open about their sex lives—is also its most confusing. “Casual” gets that, at least a little bit. Later in the episode, as Laura initiates sex with her boyfriend Emile again, he stops her, protesting the proximity of her family: “It’s just weird, you all living in this house together.” “It’s not weird,” she retorts. “He and my mom are best friends. And he’s really depressed.” “He seems alright,” Emile responds. “Exactly,” she says, before pulling her shirt over her head. “Look, do you want to have sex or not?”

Literally seconds later, her mother and uncle walk in. Emile is, naturally, a little put out. He is just the first person to feel a bit violated by the Val/Alex/Laura trinity; he is far from the last.

“Casual” is a weird show, and at first, it’s not entirely easy to go with its erratic flow. It’s a half-hour comedy that borrows the aesthetics of indie film to tell a story that’s kind of about dating, kind of about depression, and necessarily about family—like HBO’s “Togetherness,” FX’s “You’re The Worst,” and Amazon’s “Transparent,” all set in Los Angeles. It doesn’t quite have the craft, the comedy, or the driving plot of these three, though; in Hulu's part-network, part-digital model, the series will drop one episode at a time on Wednesdays for the rest of the fall, meaning binge-watching will only be possible in 2016. A half-hour every week might make it hard to understand "Casual." What saves the show—really, what makes the show matter at all, in the first few episodes—is Watkins’ Valerie, who is the only member of this odd three-person family that at first seems at all relatable. When we meet her, she is sitting stiffly on a borrowed bed, her feet so carefully planted on the floor that it seems like her posture is all that’s keeping her from falling to pieces. Next to her is neatly bound stack of legal documents—her divorce papers. And though she does manage to get up, change, and go to work—that day, and every day—she embodies the devastation of her life in every movement.

Watkins is typically a comedian—in “Trophy Wife,” she was the scene-stealing second wife, Jackie, and she’s had smaller parts in “Wet Hot American Summer: First Day Of Camp,” “Enlightened,” “Veep,” “New Girl,” and “Transparent.” In “Casual,” she gets a chance to be a lead in a show that is not exactly dramatic, but not exactly comic, either. It’s a revelation. As strange as “Casual”’s premise is, at first, it becomes clearer and clearer that it’s supposed to be strange, because these are three people who have washed up on the shore of normal relationships. The boundaries between Val, Alex, and Laura are messed up because a lot of things about them are messed up.

Executive producer Jason Reitman has built a career on subtle character dramas that explore sociopolitical issues—“Up In The Air” was not-so-secretly about the recession, “Thank You For Smoking,” about corporatism and greed, and “Young Adult,” about the destructive fantasies of an addict. (It’s best not to speak of “Labor Day.”) His style is evident in “Casual,” but the real vision here is that of Zander Lehmann, an almost total newcomer (he did apparently have a small acting role in the seminal film “Airheads”). Reitman’s “Men, Women & Children” was notoriously awful—our own Andrew O’Hehir called it “dire, heavy-handed, self-congratulatory and overwrought”—and that was because it engaged in a lot of hand-wringing about what technology is doing to human relationships. Lehmann is similarly interested—and occasionally, similarly horrified—but thankfully, steers clear of most of the moralizing.

It still makes mistakes. “Casual” flirts with being intolerable, as any show that fixates on the emotional disconnection and poorly defined purpose of the upper-middle class would. I recognized a bit too quickly the story beats where Alex dreams about flooding, Valerie doesn’t know how to text, and Laura develops a crush on a teacher. This type of show relies on storytelling about the inessential, inescapable hiccups of being a person, which backfires when you don’t like the person. Though Laura and Valerie eventually become emotional cornerstones of the story, by mid-season, Alex is still a perplexing character that hasn’t earned his interiority. It seems we must zero in on the emotional stuntedness of an extremely handsome, independently wealthy, multitalented white man, just to keep the universe in balance; it doesn’t help that off the three leads, it’s Dewey as Alex that is the unfortunate weakest.

But—in the manner of these subtle, emotionally aware dramas—“Casual” draws you in. The show is perplexing, but as evidenced by the care it shows for Laura’s fragile relationship with her father, or the siblings’ devotion to each other in the face of their egotistical, manipulative mother (Frances Conroy)—it has a poetry to it, too.