Secrets of "Saturday Night Live" at 40: "There would never be anything like this again"

As "SNL" returns for season 41, the two writers who know it best share highlights of a magical celebration 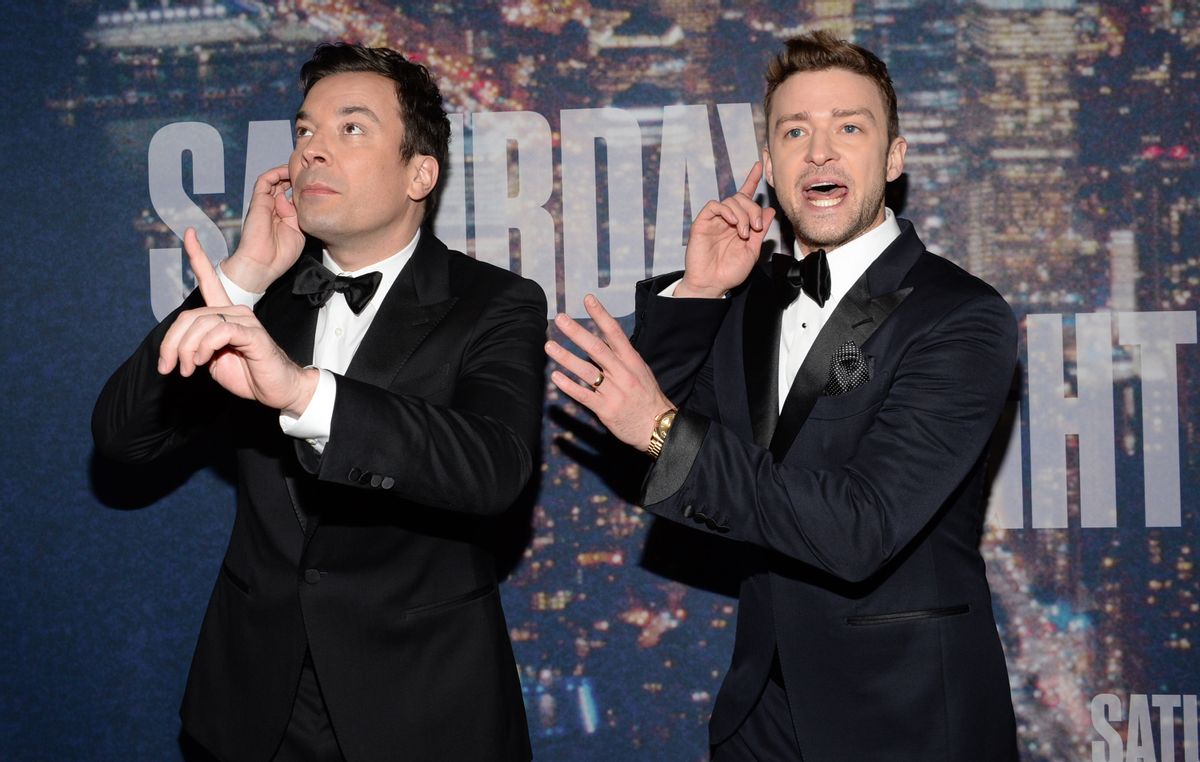 Excerpted from "Live From New York: The Complete, Uncensored History of 'Saturday Night Live' as Told by Its Stars, Writers and Guests"

It’s highly doubtful that anyone associated with the premiere of Saturday Night Live in 1975 imagined that the show would still be around ten, fifteen, or twenty-five years later. Some of those present at the creation, however, were definitely still around on February 15, 2015, and they, along with dozens of other alumni from TV’s longest-running comedy show, returned to Studio 8H to celebrate its epochal fortieth anniversary.

The special, which spanned more than three and a half hours of prime time on NBC, truly had something for everybody who’d ever loved or even liked the program, and it also, true to form, had something for everybody to bitch about. Lorne Michaels, the show’s creator and its producer for all but five of those forty years, was determined to invite everybody associated with SNL in any significant way to attend the TV special and a splashy after-gala, and he gave orders to the producers and writers of the special to include as many celebrated or notorious highlights from four decades of SNL as possible.

Blocks of memory-stirring moments were interlaced with new versions of SNL classics, all of them combined in an astonishing whirlwind ride—one that demonstrated how SNL could sail through myriad changes in American trends, fads, fashions, attitudes, institutions, social realities, political movements, and technology and manage to remain young, even as the rest of us grew older. The show had begun, actor Robert De Niro noted, “back when TV was still watched on TV,” when if you missed the show on Saturday night, then you missed the show.

In reviewing the special, Internet writers and bloggers and social-media practitioners dubbed it “uneven,” a charge that the series has faced since its inception. The show was always bound to be uneven, partly because it envelops and displays so many different kinds of comedy, intermingling political satire with shameless slapstick and ribald or just plain dirty farce.

On the fortieth anniversary show, the clips whizzed by with once-familiar sayings and catchphrases popping back into the collective consciousness . . .

“I would like to feed your fingertips to the wolverines.” —Michael O’Donoghue to John Belushi, and vice versa, from the first episode ever aired

“Guess what: I’ve got a fever. And the only prescription is more cowbell.”—Christopher Walken, as the Bruce Dickinson, to Will Ferrell, Jimmy Fallon, and others in a classic sketch from April 2000

“Wow! That’s good bass!”—Laraine Newman to Dan Aykroyd in a reenactment of Aykroyd’s Bass-O-Matic commercial spoof from the first season

“Remember when you were with the Beatles?...That was awesome.”—Chris Farley, as an inept but lovable interviewer, to Paul McCartney in February 1993

“I can see Russia from my house!”—Tina Fey as vice presidential candidate Sarah Palin in 2008

“It was my understanding that there would be no math.” —Chevy Chase as Gerald R. Ford in a presidential debate from the first season

“I can’t believe I’m losing to this guy.” — Jon Lovitz as Michael Dukakis in response to a burst of gibberish from Dana Carvey as George Bush, in a presidential debate from 1988

“Well, it got a big laugh—but did it get the right laugh?” —Mike Myers as Lorne Michaels in a “Wayne’s World” reunion (with Dana Carvey) written for the fortieth anniversary special

And, yes, Generalissimo Francisco Franco was “still dead,” as Chevy Chase had regularly reported in the first season of “Weekend Update” mock-newscasts, back when the cast was known as the Not Ready for Prime Time Players.

“There they are—all my friends,” said John Belushi, made up to look like the old man he would never live to be and pointing to headstones on a cemetery hill in Tom Schiller’s poignant 1977 short film Don’t Look Back in Anger. All his old cohorts from SNL had preceded him in death, Belushi said, scoffing at suspicions that he would be the first to go.

Even SNL detractors would have to admit that the range represented on the special verged on awe-inspiring; it was that breadth of scope and style that helped explain the forty-year run in the first place. That, and the fact that the show perpetually replenished itself onstage and in the writer’s room, launching the careers of many an extraordinary performer in the process.

The assembled glitterati watching the special in Studio 8H represented a cross section of the pop-culture elite, just as the performers constituted a remarkable roll call of comedy royalty. They came together to honor a program that had started in the minor tributaries of television and soon became a torrent in the mainstream.

Among those seated in the audience that February night was Al Franken, once a Peck’s Bad Boy of television on SNL, now grown up with a vengeance. As a writer and performer, he had maliciously insulted network president Fred Silverman in a sketch for a 1979 episode of the show, and now he was serving his second term as a U.S. senator from Minnesota. How things change.

Bill Murray, as lounge singer Nick Ocean, sang new and gratuitous lyrics to the theme from Jaws, with Paul Shaffer at the piano (“Jaws! You took me and made me part of you...you bastard, Jaws”). Eddie Murphy, who’d refused to take part in the show’s twenty-fifth anniversary, made a noncomic appearance to say that all was forgiven and that “I will always love this show” (though he refused to do an impression of scandalized Bill Cosby). Tina Fey and Alec Baldwin paid tribute to Tracy Morgan, former cast member suffering through a long recuperation following a traffic accident. And, in a selection of clips, viewers saw the ancient auditions of performers who did make the cast and a few — Jim Carrey, Kevin Hart — who didn’t.

“I’m just glad it’s over” was one of Michaels’s comments a few days after the complex, spectacular, exhaustive, and exhausting show had aired. He was saluted at various points in the program, lampooned at others, and was called up onto the very crowded stage for good nights. And it was clear, however much he and the show he created have tried to avoid sentimentality over the decades, that even Michaels was fighting back tears.

Afterward, at the Plaza Hotel, worlds collided in a way that only Michaels could probably engineer. With all due respect to Vanity Fair’s fabled Oscar bashes, no one else could have summoned the array of musicians, comedians, actors, politicians, and corporate big shots that Michaels brought together that night. Music was in the center ring, starting with Dan Aykroyd summoning onstage the likes of Paul McCartney, Jimmy Buffett, Taylor Swift, Debbie Harry, Miley Cyrus, Ariana Grande, the B-52s, and Michael Bolton. That was hardly that. Jimmy Fallon later called on Prince to take the stage and bring the evening to the proverbial “next level.”

What was being celebrated that night was a phenomenon that — through the endlessly morphing and recharging organism that Michaels had created — had made not only television history but also played a role in the political and social direction of the nation. Born in an age dominated by three TV networks and a smattering of independent stations, Saturday Night Live had survived into the Internet era and was still rolling powerfully along.

The SNL special drew an impressive 26.5 million viewers according to Nielsen ratings, ranking it as the most-watched NBC Entertainment program in a decade, and also setting a record, according to Entertainment Weekly, for the largest number of tweets ever prompted by a single program—9.1 million people interacting via 1.3 million tweets, by the Nielsen Social count.

It would be all but inarguable to declare the night not only a success but also a milestone. One had to concede—considering the innumerable earthquakes and sea changes that had already occurred in American media and all the others undoubtedly lurking in the future — that, no, there would never be anything like this again.

Excerpted from "Live From New York: The Complete, Uncensored History of 'Saturday Night Live' as Told By Its Stars, Writers and Guests" by James Andrew Miller and Tom Shales. Published by Back Bay Books. Revised 40th anniversary paperback edition copyright September 2015. Reprinted with permission of the publisher. All rights reserved.