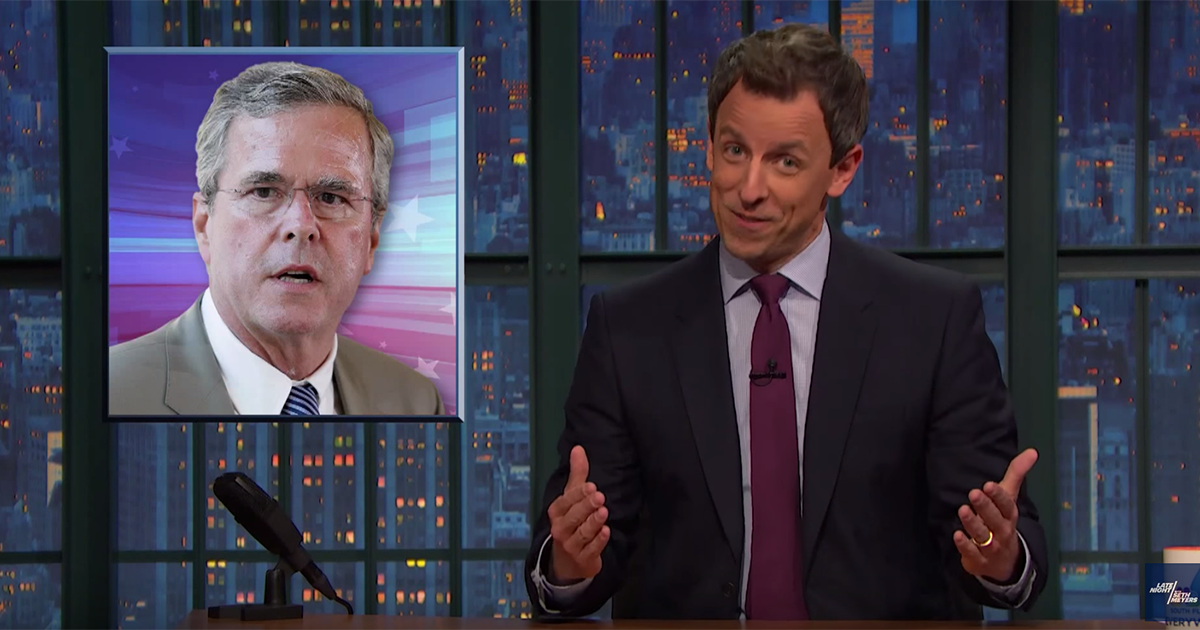 Monday night on his nightly show "Late Night," Meyers addressed Jeb Bush's "stuff happens" by quoting the entirety of Bush's comments to clarify what Bush actually meant: "So to be clear, he wasn't callously shrugging off the shooting, he was just that when tragedies like these occur it's important for the government to not do anything." This is remarkably similar to many of his brother President George W. Bush's policies on domestic issues.

Meyers showed Bush after the Conservative Leadership Project forum being questioned by the New Yorker's Ryan Lizza: "No, it wasn’t a mistake. I said exactly what I said. Why would you explain to me what I said wrong? Things happen all the time—things—is that better?" Bush said defensively.

"I will say," Meyers said. "When it comes to running a campaign, Jeb Bush isn't good at things or stuff." Funny, because it's true.

He went on to cite Bush's second attempt at a clarification, where he talked about fences around pools:

"A child drowns in a pool and the impulse is to pass a law that puts fencing around pools," Bush said. "Well, it may not change it… the cumulative effect of this is in some cases, you don’t solve the problem by passing the law, and you’re imposing on large numbers of people, burdens that make it harder for our economy to grow, make it harder for people to protect liberty."

Meyers then cited a Florida law passed during the Bush administration and signed by Jeb in 2000 called the Residential Swimming Pool Safety Act which did actually require that a "barrier must be placed around the perimeter of the pool." This is awkward. "So to clarify" Meyers said, "Jeb Bush is in favor of pool control, not gun control."

That's when Meyers completely crushed it with a kind of logic that could send Republican candidates spinning in bumbling circles of confusion:

"But this illustrates the point perfectly: We implement sensible regulations on potentially dangerous things like pools all the time. Why should guns be any different?" Meyers asked. "I know, I know. There's no 'Right to Bare Pools' in the the Constitution. But that's only because our Founding Fathers failed to see that a bunch of rich assholes would want cement ponds in their back yards."

He then moved on to attack Mike Huckabee, Marco Rubio and Ben Carson, all of whom made similarly disconnected statements about the futility of regulations for guns. Meyers said, however, that the best illustration of hopelessness with the issue came from Chris Christie, who said yesterday that there is no correlation between tighter gun restrictions in New Jersey and low gun crimes.

"Christie actually disagrees that the laws in his own state have been successful in curbing gun violence," Meyers said. "That's how backwards the politics of this issue are. Have you ever seen a politician decline to take credit for something good that happened in their state? That's like Kanye saying 'ya know I don't deserve this award, it was really the sound mixer...'"