"This is what erasure looks like": Texas mother shames textbook company into putting slavery back in American history textbook 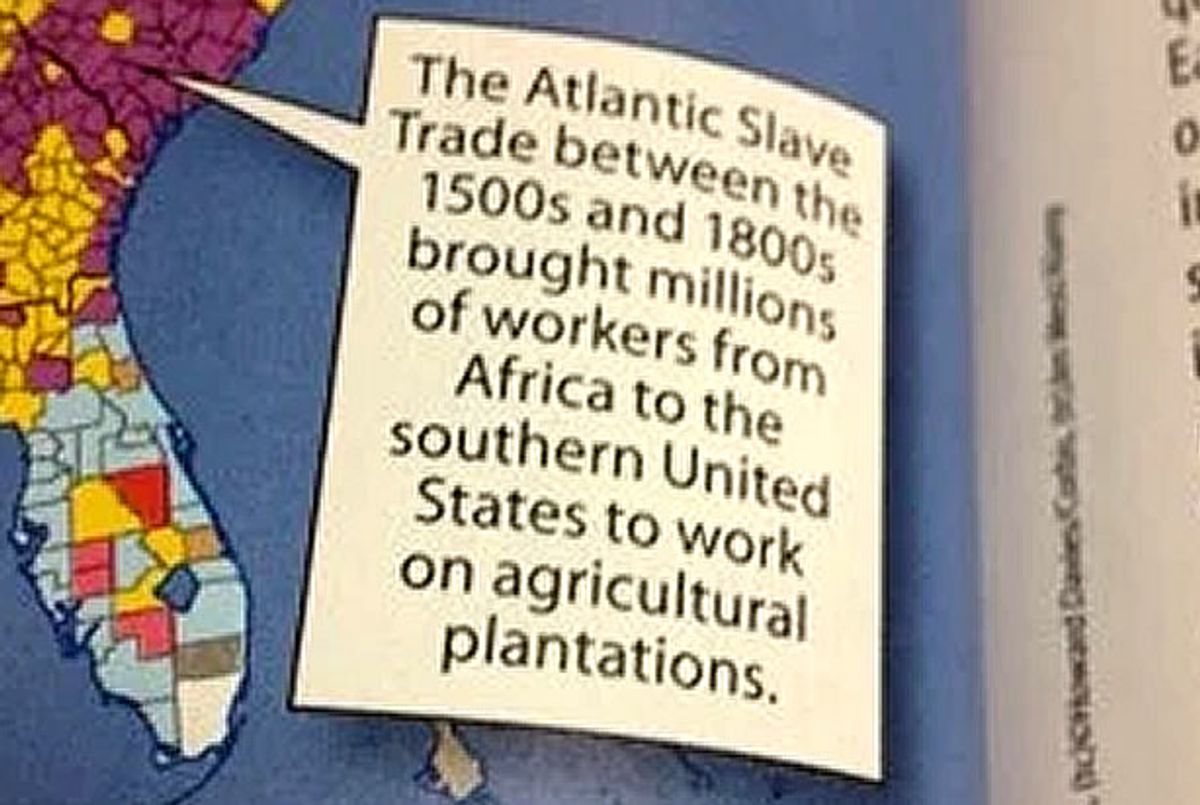 The New York Times reports that the publisher of a textbook which referred to African slaves as "workers" would be changed -- but the woman who first lobbied the complaint isn't sure the proposed change will be sufficient.

On page 126 of McGraw-Hill Education's "World Geography" textbook, in a section titled "Patterns of Immigration," students were being informed that "[t]he Atlantic Slave Trade between the 1500s and 1800s brought millions of workers from Africa to the southern United States to work on agricultural plantations."

When Coby Burren texted an image of this phrasing to his mother, Roni Dean-Burren -- a former English teacher at the high school Coby attends -- she took to Facebook and complained, vehemently, that the diction here suggests that African-Americans arrived on the continent of their own volition -- as part of a "Pattern of Immigration" -- and that they were compensated for their labor.

The words are even more galling, she wrote, given that they were juxtaposed with statements about "an influx of English and other European peoples, many of whom came as indentured servants to work for little or no pay."

It's not surprising that such an "error" occurred in the Texas edition of a textbook. The state's textbook adoption stardards are highly politicized, leading to students reading American history textbooks that don't mention the Ku Klux Klan or consider slavery as a motivating factor in the Civil War.

As Dean-Burren noted, this error is an affront to the descendants of the "workers" who "immigrated" to the United States via the triangular slave trade. "It talked about the U.S.A. being a country of immigration, but mentioning the slave trade in terms of immigration was just off," she told the Times.

"It’s that nuance of language," Dean-Burren added. "This is what erasure looks like."

McGraw-Hill Education insisted otherwise, offering a quasi-apology for the unfortunate phrasing of the caption on its Facebook page. "This week, we became aware of a concern regarding a caption reference to slavery on a map in one of our world geography programs," the company stated.

"However, we conducted a close review of the content and agree that our language in that caption did not adequately convey that Africans were both forced into migration and to labor against their will as slaves."

Or, as Dean-Burren told the Washington Post, "this is revisionist history -- retelling the story however the winners would like it told."

McGraw-Hill Education has already altered the language in digital editions of the book, and promised to do the same for the printed one.

Watch the short video Dean-Burren made that went viral below via Facebook.

Many of you asked about my son's textbook. Here it is. Erasure is real y'all!!! Teach your children the truth!!!#blacklivesmatter