A Joe Biden campaign would be an epic mistake: He'd make the race a contest of personalities, not policies

The vice president is reportedly on the verge of deciding about 2016. Here's why he should sit this one out 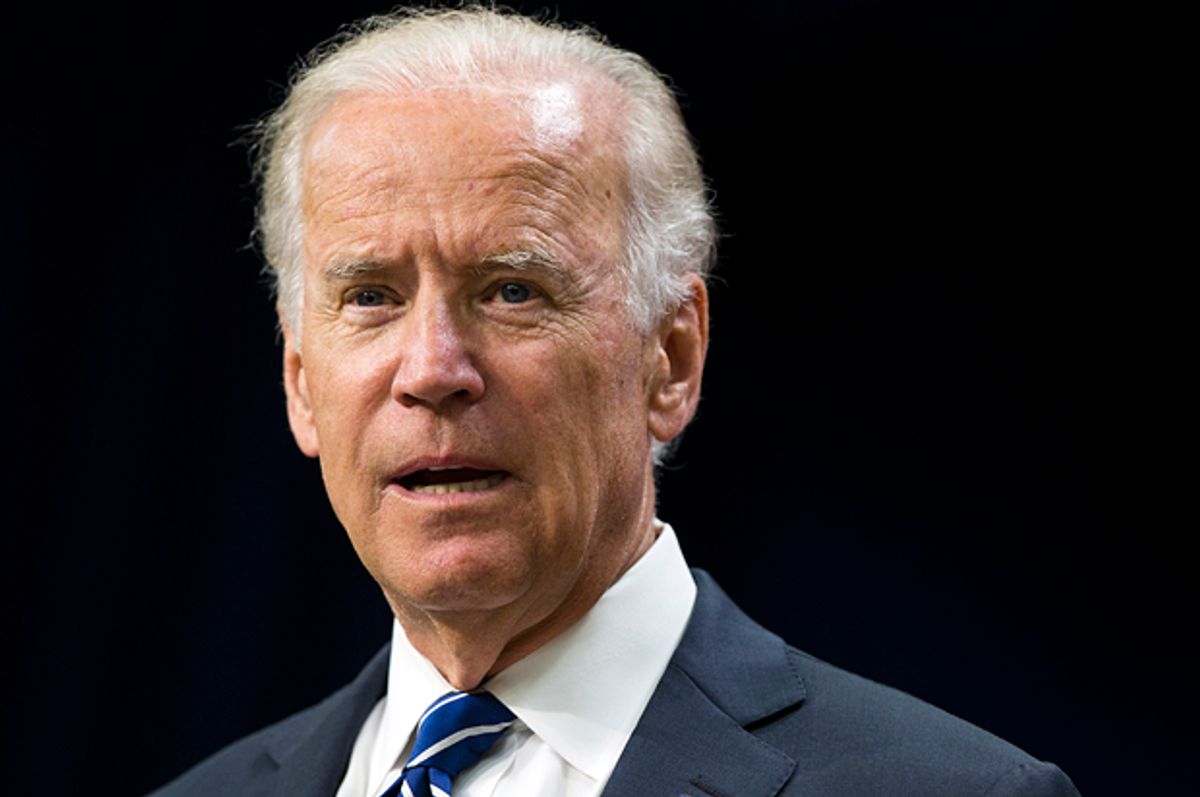 Like nearly everyone else on the planet — most especially Politico’s Mike Allen — I do not know whether Vice President Joe Biden will seek the Democratic Party’s presidential nomination.

What I do know, however, is that I hope he doesn’t; and that this phase of fevered, media-driven speculation not only diminishes the features that supposedly make Biden uniquely compelling, but wastes time — by having Democrats argue over personalities rather than policies — and turns his would-be rival, Hillary Rodham Clinton, into a more sympathetic figure, too. It’s a bad idea.

For example, take a look at the impetus for this latest round of guessing: A Monday Politico report which claimed that it was the vice president himself who first told Maureen Dowd that the late Beau Biden’s deathbed request was for his father to run for president one last time. “People read Dowd and started reaching out, those around the vice president would say,” wrote Politico’s Edward-Isaac Dovere. “But in truth, Biden had effectively placed an ad in The New York Times, asking them to call.”

Indeed, while people have wondered for years whether Biden would run, it wasn’t until Dowd's column in early August that Biden 2016 became a real thing, transforming a third Biden campaign from a septuagenerian’s final and quixotic grab for power into an act of fatherly sacrifice. No doubt, Biden’s subsequent and moving appearance on Stephen Colbert’s show helped; and Hillary Clinton’s awful summer didn’t hurt. But it was Dowd — or, if Politico’s right, Biden — who really got this rolling.

As Slate’s Jim Newell recently noted, though, even if Dowd got this started, it’s been the rest of the political press, far more than actual Democratic voters, who’ve been more than happy to run with it. “[T]he media really, really, really wants Biden to transform the Democratic primary into what it’s currently not,” Newell wrote, “a highly clickable three-way donnybrook in which Biden, Hillary Clinton, and Bernie Sanders claw each other to death for public amusement.”

Why? Well, one reason, as Newell acknowledged, is best explained by Zach Braff. It’s really hard to make money right now if you’re a media company! And it’s not hard to imagine an editor or publisher seeing how Trump’s campaign on the Republican side has buoyed traffic and hoping someone among the Democrats could offer more of the same. Unfortunately, as cynical as that motivation is, there’s another driver that is even worse: the media’s incomparably screwed-up relationship with Hillary Clinton.

Let’s follow Andrew Prokop of Vox’s request and try to imagine an alternative reality that is the same as our own except for one thing: In this world, it’s Clinton, rather than Biden, who is alleged to have used her child’s dying words to gin-up interest in a presidential campaign. Prokop notes that Biden is seen as “authentic” and Clinton as a “phony,” so the media tends to apply to them a double-standard. But, fundamentally, they’re both politicians — extremely ambitious ones at that — which means that strategic leaks are part of their stock and trade.

Still, you’d have to be a pretty devoted Clinton-hater to deny that the media would be walloping the former secretary of state if she pulled a move like Biden’s alleged one, or if a pro-Clinton super PAC started running ads, like this one, using a truly unfathomable personal tragedy in order to bolster her case for personal advancement. David Axelrod is one of the few mainstream figures to call the ad “tasteless.” If it were from Clinton, I have no doubt that he would be joined by many, many more.

But perhaps the most vexing thing about the Biden 2016 bubble is this: On policy, he and Clinton are mostly indistinguishable. If anything, in fact, he is to her right. Biden’s got a spotty record when it comes to women’s rights, financial regulation, mass incarceration, the death penalty, and foreign policy. And except for Clinton’s advantage among women, they both appeal to essentially the same kind of middle-of-the-road Democrat. Why, then, would anyone see him as a big improvement, unless it stemmed from a special dislike of Hillary Clinton, the individual, rather than her policies?

That’s a hard question to answer, and one that Biden and his supporters haven’t even attempted to address. Talking about his “authenticity” or his “likability” won’t cut it. And neither will any claim to him being a superior campaigner: She once came within a hair’s breadth of winning her party’s nomination, whereas he’s now failed, quite spectacularly, twice (in 1988 and then again 20 years later).

Inevitably, we’re led to the conclusion that a final Biden campaign would be about personalities instead of policies. It would rely heavily on turning Biden’s personal tragedy into a political advantage. And it would be the result of agitation not from voters, but rather the press. It would be a terrible idea, in other words, one the vice president would do better to reject.