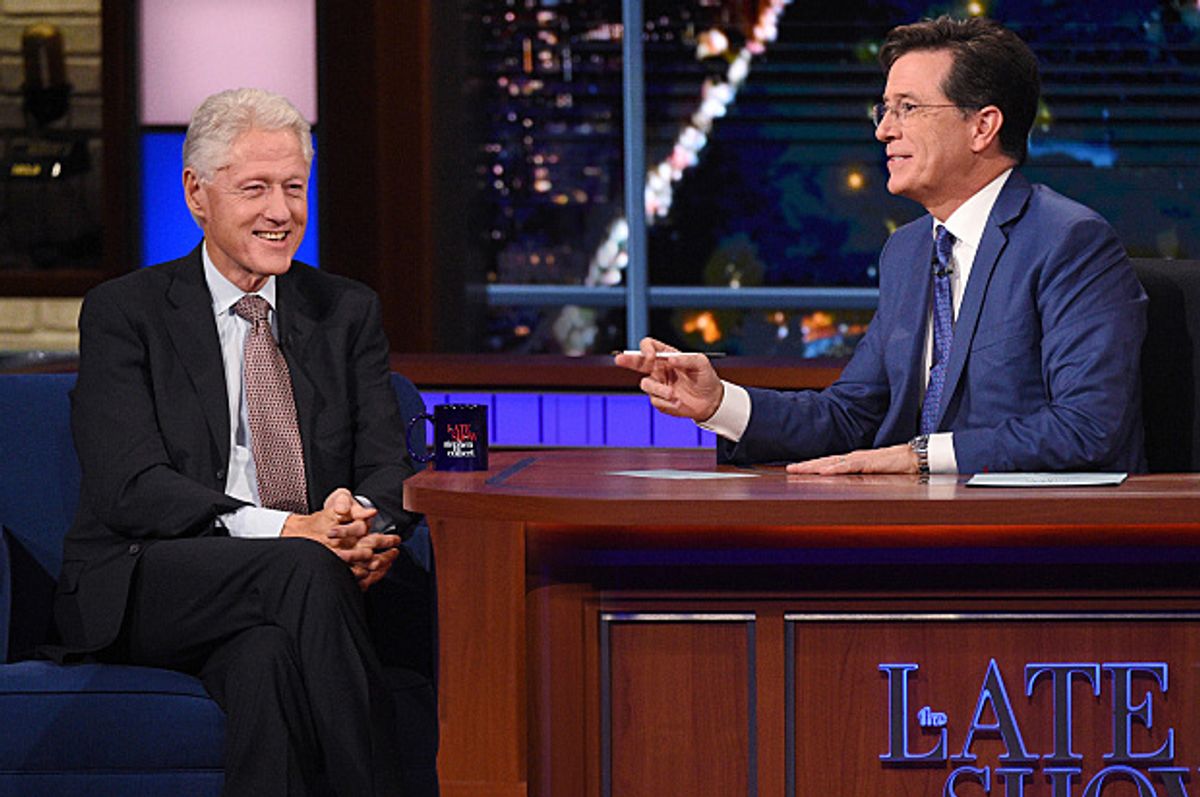 With his unusual background – a career impersonating a conservative blowhard, alongside real-life politics that are at least center-left – Stephen Colbert sits in a fortuitous place in the landscape of late night. Lately we’ve seen both a changing of the late-night guard and a new emphasis on electoral politics, and Colbert has broken out as the host best equipped to speak to politicians on both sides of the aisle.

Last night’s appearance by Bill Clinton – the lean, white-haired, healthy-eating, non-saxophone-wielding edition – reinforced just how good Colbert can be when speaking to a politician. And it also reminded us that those of us in the audience get more out of this sort of thing when Colbert pushes a little harder.

What is Clinton these days? An ex-president dragging uncomfortable baggage behind him? A noble statesman? A gifted but controversial politician? The spouse of a candidate not long ago seen as inevitable? The head of a global foundation?

Viewers got glimpses of each of these roles in the course of the meeting. So far, the most quoted lines from the interview come from its conclusion, where Clinton gave a kind of backhanded description of Bernie Sanders’ appeal (liberals are “hacked off,” want to move to the left the way the GOP has moved to the right), denied having encouraged Donald Trump to run, and called the blustery mogul “the most interesting character out there.” (Trump’s candidacy, Clinton said, “may have a short half-life,” but turns on the “macho appeal” of saying, “I’m just sick of things not happening, I make things happening, I make things happen, vote for me.” Well said, if hardly ground-breaking.)

But the conversation was noteworthy for other reasons. Colbert did not invent the interviewer’s method of putting his subject at ease with softball early questions and then coming to tougher ones later on. But he’s used this familiar structure effectively in most of his other meetings with pols.

With Clinton, he got a bit starstruck and let the ex-president coast too much. He’s also smart and perceptive enough that he brought up the key issue of post-Reagan politics: politicians who don’t believe in governing and an electorate that has picked up the message.

Colbert touched on the issue twice. The first time, Colbert asked Clinton whether his various global efforts could work without government; in an era that worships corporate philanthropy and foundations run by wealthy men, it’s a question surely on many people’s minds. Clinton responded that these groups can be effective. “But you really need a strong, effective government to do its part.”

The second time, Colbert drilled into the issue more directly. “There’s so little trust of our government now,” he said. “Some people actually go [to Washington] with the intent of getting nothing done because they believe government is the problem.”

After several years in which the Tea Party has made this very notion the center of its appeal, and in a GOP race in which three major candidates for president – Trump, Ben Carson, and Carly Fiorina – have zero experience with governing, this idea is absolutely central. But it didn’t really go anywhere. And since Bill Clinton blended traditional liberalism with skepticism about “big government,” this would have been an excellent time and place to spend a few minutes on the subject. Well, we’ll have to wait ‘til next time. Part of Clinton’s appeal has always been his hangdog, small-town folksiness, and Colbert let him trade on that for much of their conversation.

Clinton did offer smart answers to questions about divided government (we would have been better off with it during the George W. Bush years, he said, even “gridlock”), campaign finance (he riffed on the way the idea of freedom of speech was being distorted by billionaires), and the human race in general (drawing on the scientist E.O. Wilson, Clinton described us as “the great cooperators.”) Questions about Hillary Clinton were light; she can surely speak for herself.

All in all, not a bad showing by Clinton and Colbert, and it was a more informed conversation than we would have seen on most late-night shows.

This is, of course, television – and a show that also features comedians, musicians, actors, and so on. And this Clinton is not really running for anything so Colbert may’ve thought this would be a chance to hang out, Jimmy Fallon-style. But here’s hoping that the next time the best political interviewer on late-night television – where politics has never been more central – meets a politician capable of discussing serious ideas, he ‘s a little less accommodating.