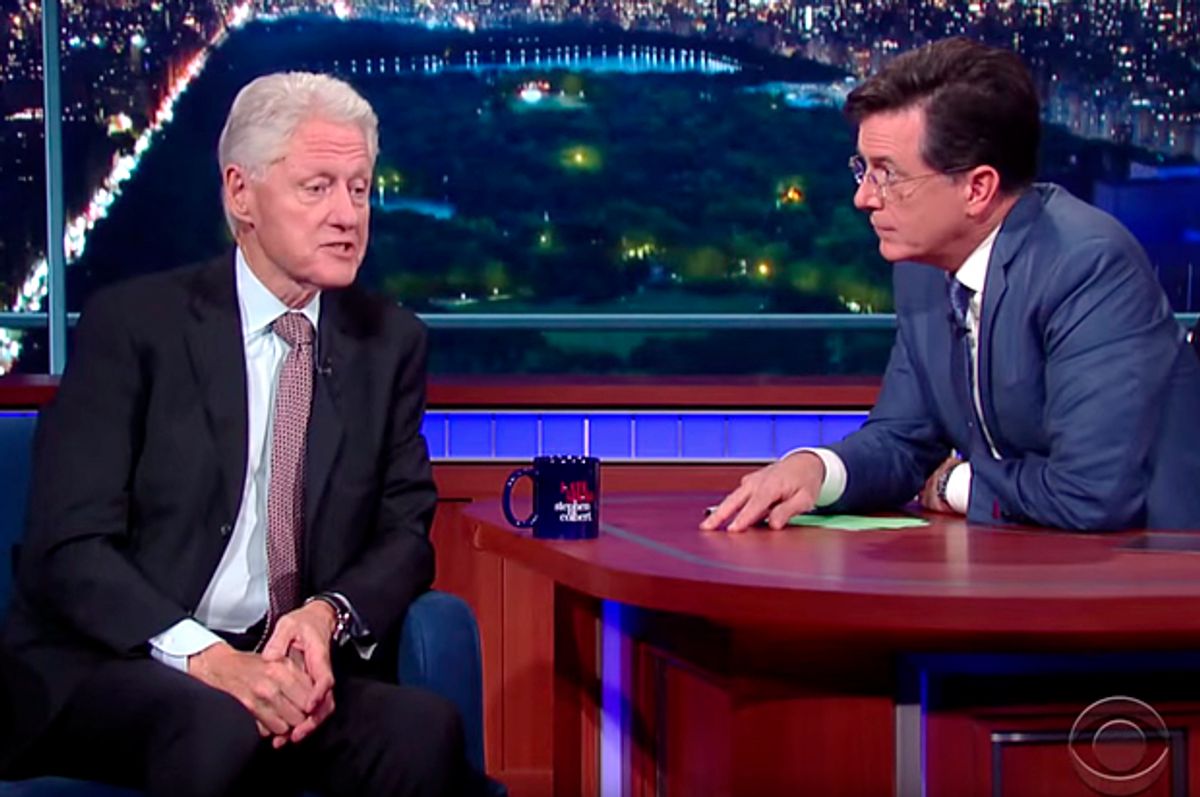 Stephen Colbert doesn’t quite yet know who he is without the mask. It was apparent the night that he interviewed Donald Trump, and it came up again last night with another politician—former President Bill Clinton, making the rounds on behalf of his wife Hillary, the leading Democratic presidential candidate. Clinton is fantastically calm in the hot seat, and just really, really loves explaining things; a few minutes of Clinton Global Initiative spin went by before Colbert really got to a question. Sitting in “The Late Show”’s nondescript chair, wearing a dark suit, and looking thinner, frailer, and more benign than ever, it was hard to imagine that the former president was at the center of a sex scandal.

It was also hard to imagine that Colbert was an interviewer who delivered segments that went down as legend. The host had a few questions he tried to hit, and he got there, but they were largely softballs; the order of the day was not incision but flattery. Colbert, on “The Colbert Report,” was short on time, pull, and influence; having ascended to “The Late Show,” the host’s drive is a little sidelined by the unrestrained glee of having David Letterman’s old job—and, perhaps, the calm made possible by not having to be in boorish, ultra-conservative character every day of the week.

But where Colbert, the persona, could pose the toughest questions without flinching, Colbert, the person, is having a bit more trouble. To a degree, “The Late Show” is just a different kind of comedy show. But it would be a shame if that translated to a blander Colbert. His instincts as a comedian are to not just interrogate the fun, but join in on it; his character gave him a way to enter the fray of rancorous public debate and contradictory ethical pronouncements. Now that he’s mask-less, it’s a little harder to have fun with the state of American politics, which seem at times to be an ever-widening nightmare.

Nowhere is this more obvious than the Donald Trump campaign. I wrote earlier this month that Colbert’s treatment of Trump was to goad him to further excesses, and then unleash him onto the public; even tonight, the host seemed ecstatic that Trump was running, asking Clinton if he’d convinced Trump to run so as to secure the Oval Office for the Democrats. Clinton called Trump a “master brander,” but denied involvement in the campaign. And that was it; it’s Trevor Noah on “The Daily Show” and Larry Wilmore on “The Nightly Show” who are taking the biggest digs at Trump right now, while arguably one of the best political satirists alive today is hanging out chatting about vaping.

I’d love for Colbert’s optimism in the electoral process to be justified. The host seems truly unconvinced of Trump as a serious contender for the presidency. But last night’s looseness made me wonder who we’d see behind the desk of “The Late Show” if Trump starts winning things; it made me wonder if we could count on Colbert to speak some kind of truth to some kind of power.