I hate your kids. And I'm not sorry.

I can’t remember a time when I felt anything more positive than contempt for children. Yes, even your adorable ones 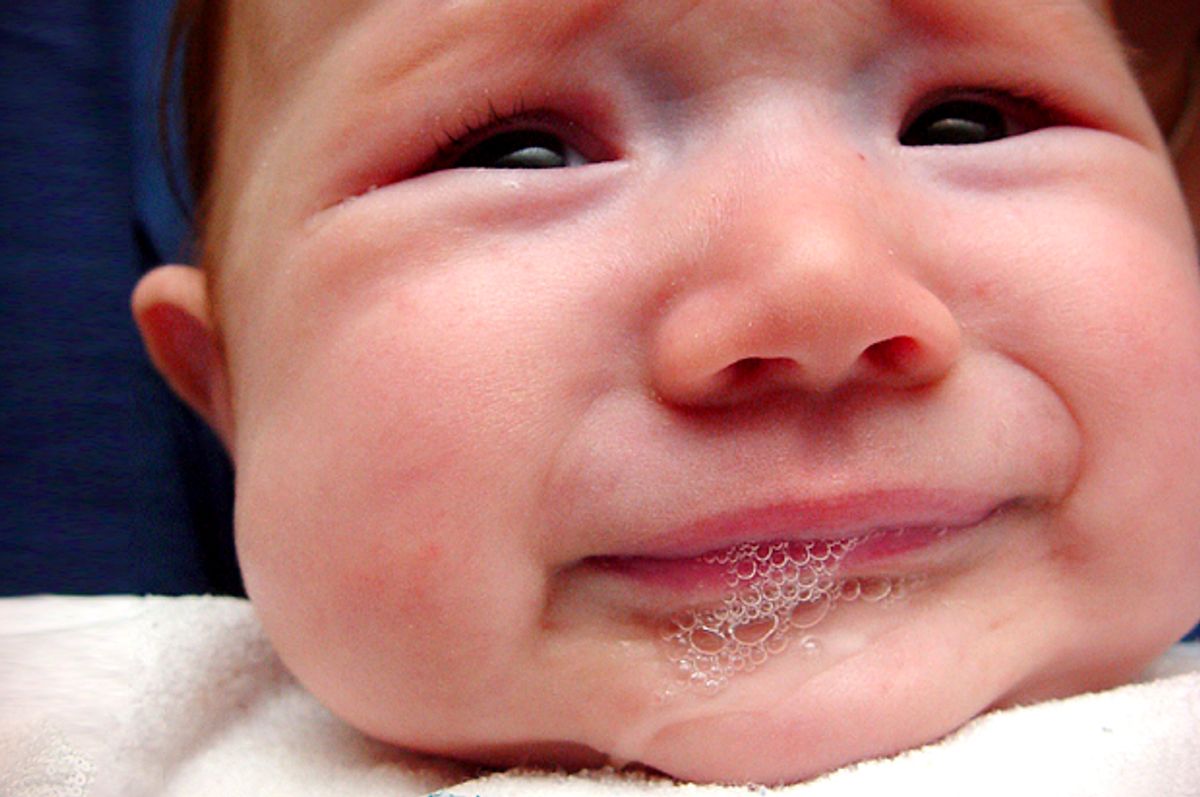 I was 19 when I held a baby for the first and last time.

On a street in New York City, a harried-looking mother with an infant in one arm and a stroller piled high with shopping bags strode up to me and asked if I could hold her child while she bent to tie her shoe. Before waiting for an answer (which I think I can safely assume she had assumed would be yes), she thrust the baby into my uncertain arms.

At 5’2” and with a bit of a baby-face of my own, I’m not an especially threatening presence. Likely, this woman had selected me for the task of cradling her child because I look like the last person who would be a monster. Yet, as she straightened up and saw me holding her smiling, gurgling infant at arm’s length, a confused and nauseated look on my face, I could tell that in that moment, she thought me one.

I identify as a childfree woman, one of a growing demographic of young people for whom having children is not only not in their present, but not in their future, either, entirely by choice. (Syntactically, the childfree are distinguished from the childless—those who want children but cannot or do not have them—because the latter term implies that one is “less” something for not having offspring.) For many, the decision to be childfree is a matter of practicalities: a baby would not fit in with their career and lifestyle, or they aren’t financially secure, or they haven’t yet found The One. While all those things are true in my case, the main reason is much simpler: I basely, emphatically, viscerally hate children.

I can’t remember a time when I felt anything more positive than contempt for children, even when I was a child myself. From (quite literally) the time I could talk, I announced my intent that I never wanted children, and as a little girl, I never had even the slightest inclination towards baby dolls. As an only child of older parents, I spent much of my time around middle-aged adults, and found I far preferred their company to that of my agemates. As an adult, my dislike seems to be rooted in my nature, stemming from the same sort of inborn, primal (if opposite) urge as those who desperately want them. I think of myself as “not a kid person” much in the same way that someone else might feel they’re “not a cat person” or “not a dog person”; it is not a conscious choice, but a natural state of being. But whereas cat- and dog-haters get a pass from society, there is something singularly off-putting to others about having an aversion the young of one’s own species.

Other childfree women have felt this resultant animosity, and have tried to preempt others’ judgment. From data-driven news stories to personal essays—including those in the excellent new collection “Selfish, Shallow, and Self-Absorbed: Sixteen Writers on the Decision Not to Have Children,” edited by Meghan Daum—almost each story by and about childfree women seems to include apologetic, vehement protestations that such women are not baby-haters. (“We do not hate kids,” Daum writes in her introduction, “and it still amazes me that this notion is given any credence.”) Nearly every woman-authored piece on the topic, both in Daum’s collection and elsewhere, is defensive about an implied dislike of children, and those that aren’t are instead evasive of it. (Notably but perhaps unsurprisingly, men who dislike children are more outspoken about it, and far less stigmatized.) Childfree women are often characterized as doting and dedicated aunts, godmothers, professionals or community volunteers whose lives are full of children they love, even if they ultimately—some pined for children in the past—do not want any of their own. I have no doubt that such characterizations are true, and that many childfree people do in fact love children; that is their reality. But by failing to account for the possibility that there are baby-haters among us, by attempting to subvert the ugly stereotype before it even arises, such authors negate the experiences of—and even the existence of—those of us for whom our reality is in fact one of baby-hating. And by denying that we exist—especially for women, society’s designated nurturers, who feel this stereotype especially acutely—we are denied the chance to prove that, contrary to what one may instinctively characterize us as, this particular facet of our personalities, our identities as baby-haters, does not make us bad people.

I firmly believe that some of us were simply born without the nurturing gene and with biological clocks that nature neglected to wind. My baby-hating doesn’t come from a place of malice. I don’t wish children ill; I just want them to stay the hell away from me. I’m not a situational baby-hater, either; though a child behaving badly might cause me to shoot some side-eye or make a snarky comment, my inherent dislike of children does not significantly lessen when a kid behaves well, even if I do find them slightly more tolerable. (As Kate Christensen writes of her boyfriend in her essay in “Selfish, Shallow, and Self-Absorbed” and which I can wholeheartedly relate to, “Seeing other people with their kids, no matter how cute they are, only reinforces his knowledge that he doesn’t want them.”) I can count on one hand all the children I’ve seen in my life that have struck me as cute. On the subway, if I see even a well-behaved child heading for the empty seat next to mine, I will move across the train car, all the while raising the volume on my music. On a recent outing to the Bronx Zoo, a small child mistakenly grabbed my hand instead of her mother’s, and I instinctively recoiled as if the toddler’s touch had sent 10,000 volts of electricity coursing through my body.

I’m not the only baby-hater out there. While I am fairly open about my views, other women have confessed to me in hushed tones their dislike—even hatred—of children or doubt over whether they might ever want any. In fact, even as the stigma against baby-haters persists, science shows that there’s probably a little baby-hater in all of us: new research demonstrates that nothing kills happiness quite like having a baby does.

I know, I know; by now, the childed among you are probably thinking me a horrible person, an opinion you would likely hold no matter what else I say. So I won’t sit here and regale you with tales of what I good person I am, because frankly, that would be overcompensating. While I try to be a good person, the truth is, most of the time, I’m no better than average. But despite my baby-hating tendencies, I can definitively say that I am not a bad person: I don’t lie, cheat, or steal; I try to be a good friend and to be kind to others, generally; and I have a strict set of personal moral principles to which I hold myself, foremost among which is to do as little harm possible to other living things. I suspect that such qualities are true of most closeted baby-haters. We’re just like everyone else until we express the opinion that, in the eyes of society, instantly transforms us from Regular Person to Baby-Hating Monster, despite any other positive attributes we might possess. So, to escape judgment, we go about our baby-hating business quietly as we contribute to the world around us. We are your journalists, your professors, your bartenders and baristas. We are your siblings, your colleagues, your friends.

If you are my friend and you decide to have a baby, I will feel nothing but genuine joy for you, because as your friend, I value your happiness. I will bring you meals and toys and those adorable little baby shoes (which I will find far cuter than the kid itself), and I will always lend a sympathetic ear when you’re tired and need to vent. I will do so with glee and sincerity, because you are my friend and I love you. But I will still hate your baby, and for that, I will not apologize.

Alanna Weissman is a recent graduate of the Columbia University Graduate School of Journalism.