Trevor Noah's bows to Aaron Sorkin's massive ego: Another puffy interview from a "Daily Show" host with work to do 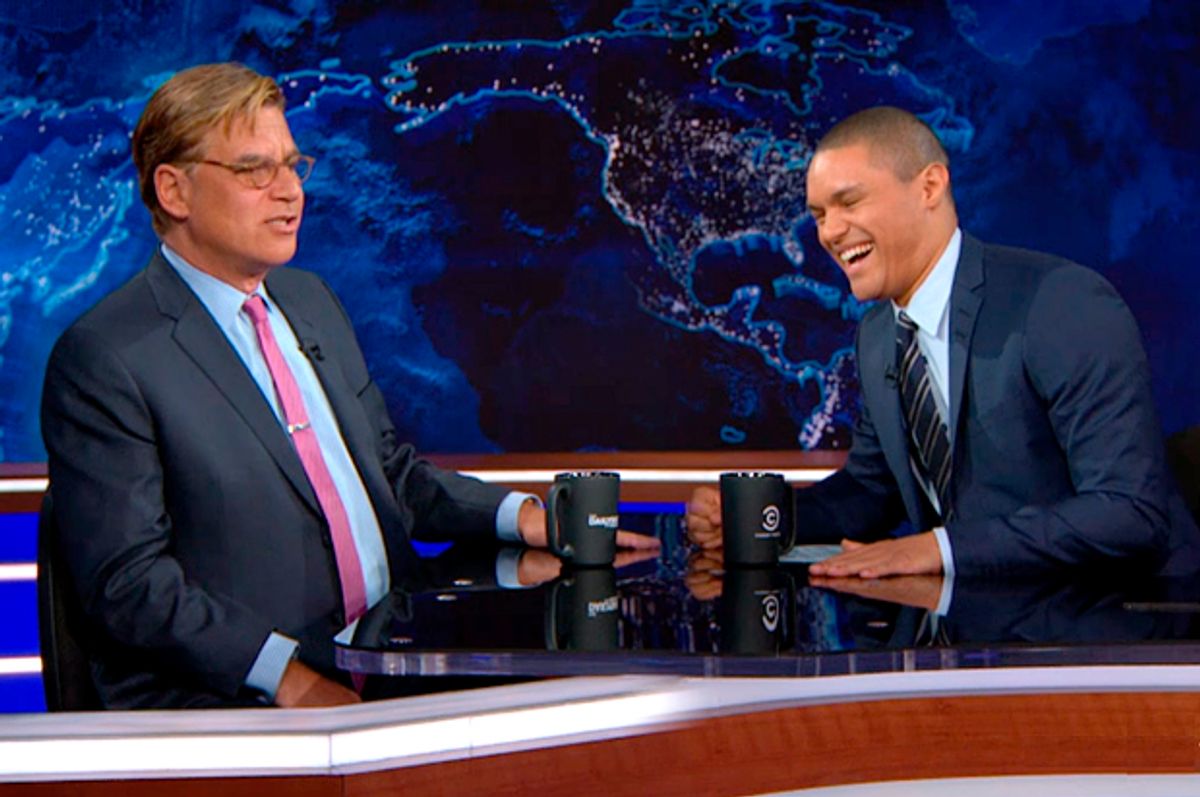 For a man who seems to have made a career out of being provocative, screenwriter Aaron Sorkin was not particularly quotable on last night’s “The Daily Show With Trevor Noah.” Partly that’s because the upcoming “Steve Jobs,” which Sorkin wrote, doesn’t have much to do with global politics. And partly that’s because Noah didn’t really push Sorkin to say anything interesting.

During Noah’s debut week, the interviews were consistently weak, even as the opening monologues and correspondent pieces noticeably improved. Noah’s not much for spur-of-the-moment humor—it seems to destabilize him, as I wrote last week—and it makes him a stilted interviewer. It does not help that finessing a promotional interview to be somewhat interesting to the audience is not an easy task. Watching the screenwriter of a film and someone who really liked the film discuss it would be fun if you’d seen and liked the film already, but it’s weirdly pointless when literally no one in the audience has seen it. Talk show hosts earn their keep by making small talk with celebrities that make their projects, and those celebrities themselves, sound somewhat interesting. Trevor Noah is still learning the ropes.

It made for an interview where no one came off too well. I believe Sorkin to be a certain kind of genius, but even his biggest fans are forced to contend with his massive ego, one that takes up all the available air in any confined space. Without Noah challenging him at all, Sorkin’s arrogance was its own separate entity, lumbering around the “Daily Show” studio.

His insistence that he doesn’t know anything about tech makes the fact that he’s written now three critically acclaimed movies about the tortured personalities around technology even more remarkable. And he knows it. “I’m absolutely done with Silicon Valley,” he said. “You really don’t want to make these people mad at you.”

He was referring to Apple and Facebook employees’ ability to “hack into my hard drive and do anything they want.” Noah asked: Given his focus on tortured geniuses, was Kanye West next? Sorkin laughed, and I cringed, because I don’t think that would be a good idea, Trevor Noah. But I think Sorkin and I both expected Noah to call Sorkin himself a troubled genius—and to ask, maybe, when Sorkin would write his own auto-biopic. I was expecting it because I thought Noah might fall into the easy trap of flattery. I think Sorkin was just expecting flattery.