Bobby Jindal surges in the "hating poor people" primary: The regressive tax plan that's propelling him to the top

Bobby Jindal will cut taxes on the rich, raise taxes on the poor, and slash spending -- it's "shared sacrifice!" 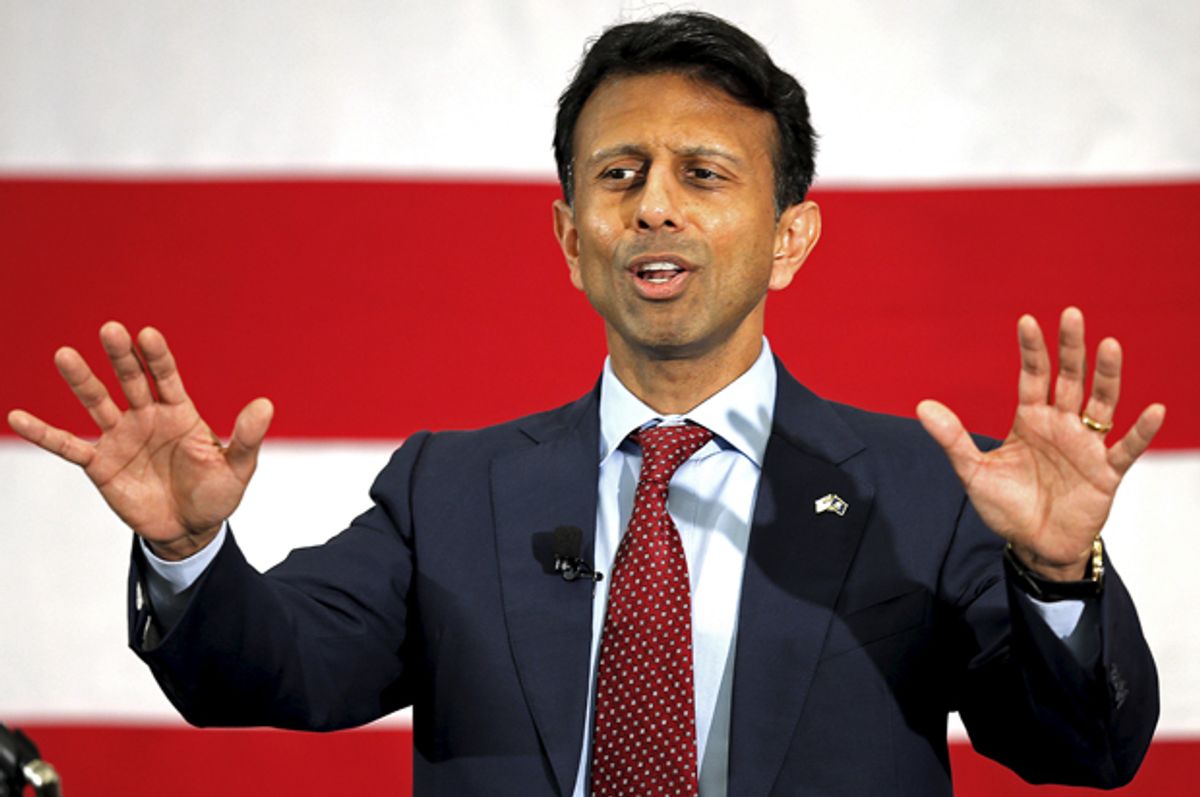 Bobby Jindal is still running for president, amazingly, and he’s trying to catapult himself out of the mid-zeroes in the polling averages with a new, controversial tax plan. Jindal wants to raise taxes on the poor because, he argues, it’s high time they started contributing something around here and began learning the value of freedom.

The big idea motivating Jindal’s plan is the absurd fiction that having no federal income tax liability means you don’t pay any taxes. “If we have generations of Americans who never pay any taxes,” the Jindal campaign fact sheet warns, “it will be very easy for them to turn a blind eye to absurd government spending and to continue to allow our government to bankrupt our nation.” These people still pay taxes: payroll taxes, state taxes, sales taxes. Their “skin” is already “in the game,” as Jindal puts it, but he’s pretending that they’re getting a free ride at the expense of taxpayers.

It’s a classic expression of the “makers versus takers” argument that has fallen out of favor in the wake of Mitt Romney’s “47 percent” gaffe. Jindal version reframes the “makers” and “takers” as “taxpayers” and “dependents.” From the fact sheet: “The idea that half of American wage earners would pay no taxes at all only reinforces the fact that we are creating two classes in America, the tax paying class and the dependent class.” Again, everyone pays taxes, the difference lies in how much of their income is subject to taxation.

The Jindal solution is to make the tax code grossly regressive by hiking taxes on the lowest earners and dramatically slashing rates for the wealthiest. He proposes three tax brackets: 2 percent, 10 percent, and 25 percent. That top rate of 25 percent is a massive reduction from the current 39.6 percent, and it’s paired with the elimination of the estate tax, which benefits rich people almost exclusively. This is “shared sacrifice,” Jindal argues, in which the people who can least afford to sacrifice are asked to give more, while the people most able to sacrifice are asked to give much, much less.

The overall result of all this enthusiastic tax-cutting, Jindal acknowledges, will be a huge reduction in government revenues: $9 trillion over the next 10 years. Other Republican candidates at least try to argue that the “dynamic effects” of their tax cuts will supercharge economic growth to the point that the tax cuts start paying for themselves, but Jindal is operating under a different rationale. That $9 trillion reduction is, for him, an accomplishment. “The only way to shrink the size and influence of Washington is to starve it,” his plan declares. He’s pretty clearly envisioning some deep, gouging cuts to the welfare state to go along with the increased tax burden on lower earners. “Shared sacrifice,” indeed!

This is the Bobby Jindal modus operandi. He’s turned Louisiana into a laboratory of regressive tax policy and in the process transformed himself into one of the least popular governors in the country. He came into office with a simple agenda: to mold his tax policy according to the arbitrary whims of anti-tax crusader Grover Norquist. Jindal has gone to absurd and extraordinary lengths to conform to Norquist’s anti-tax hike pledge, even as revenues have plummeted and budget shortfalls have grown larger. Even the Republicans in Jindal’s very conservative home state think he’s gone overboard, and they’ve had to resort to literally begging Norquist to allow Gov. Jindal to pursue something resembling a responsible tax agenda (Norquist denied their entreaties).

When revenues have to be made up, Jindal’s preferred solution is to raise taxes on lower-income residents of his state. As Citizens for Tax Justice noted over the summer:

Putting aside Gov. Jindal’s budget shenanigans, the governor also has a history of trying to make Louisiana’s already regressive tax system even more so. In 2013, Gov. Jindal pushed to replace the state’s personal and corporate income taxes with an expanded sales tax. According to an analysis by the Institute on Taxation and Economic Policy (ITEP), the governor’s plan would have significantly increased taxes on the bottom 80 percent of Louisianans, while at the same time giving the top 1 percent of Louisianans an average tax break of $25,423 annually. Fortunately, Gov. Jindal’s plan quickly collapsed as the data on the unfairness of the plan spread throughout the state.

At least Jindal is relatively up front about the wild unfairness in his tax plan for America. He’s just coming right out and saying he’s going to use the tax code to teach poor people what it’s like to be a real, productive, worthwhile American.