Now what? The GOP is screwed -- Kevin McCarthy's exit shows that anyone smart enough to lead will be too smart to want the job

Enjoy the chaos for a moment, before the dangerous, brutal reality hits that a major political party has gone rogue 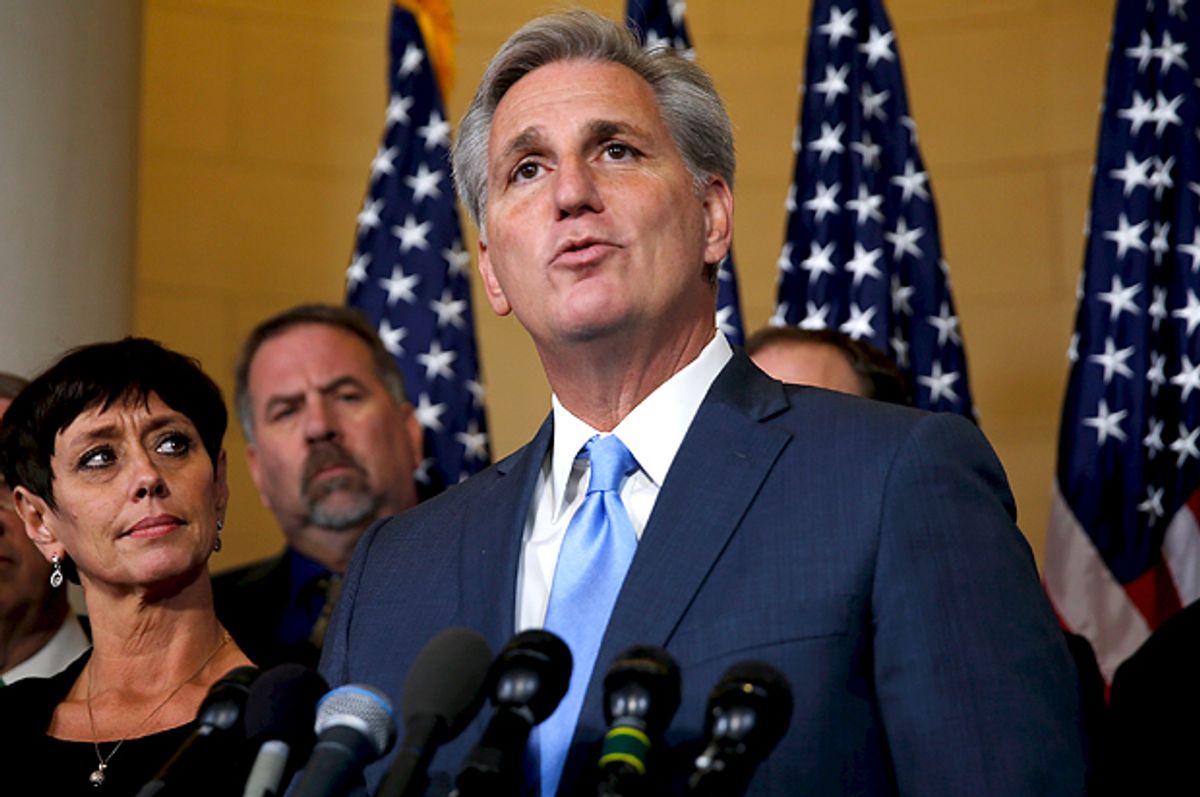 Americans barely had a chance to learn his name, and already Rep. Kevin McCarthy looks to be dropping out of the race to replace John Boehner as Speaker of the House. We don't know why exactly yet---and odds are the exact reasons will never be spelled out explicitly in public---but this flameout is hardly a surprise. McCarthy's brief spin as presumptive Speaker was a public relations disaster. First he risked the wrath of the anti-government ideologues that run his party by suggesting their favorite pastime---shutting down the government---might not be the best idea. But then he really screwed up, admitting in public that the fruitless Benghazi hearings are, as everyone already knew, about trying to create an aura of scandal around Hillary Clinton as she runs for president, as opposed to things like justice or getting to the truth.

The first rule of Fight Club is you don't talk about Fight Club. Similarly, the first rule of right wing politics is to never, under any circumstances, admit what your true motivations are. No matter how implausible your cover story is, stick to it. Abortion bans are about "life" or "protecting women," not punishing women for having sex. Voter ID laws are about "preventing fraud," not stopping black people from getting the vote. Opposing same-sex marriage is about "religious freedom" or "the children," anything but homophobia. And the Benghazi hearings are about "safety" or "justice," anything but trying to trick the public into thinking the presumptive Democratic nominee for president is corrupt or incompetent.

In light of that, you can kind of see why Republicans would be exasperated with McCarthy. Disingenuous posturing is really the first skill of a 21st century Republican, the base from which other skills are built upon. Being unable to hold the line when it comes to conservative bullshit is mandatory for a modern Republican who wants to hold office. McCarthy's inability to keep this one rule in mind probably should mean, by their standards, that he has to go.

Still, the speed with which everything has gone pear-shaped is indicative of a larger issue with Republicans, which is the party's utter inability to keep it together, especially when it comes to choosing and maintaining leadership. After all, this comes right on the heels of John Boehner's rather hasty exit, which was, in and of itself, a result of the conservative base taking a punishing attitude towards any Republican politician who dares show a glimmer of common sense or restraint. Boehner was sorely lacking in both, to be clear, but he occasionally had more than the yelping idiots who want to shut down the government over giving Planned Parenthood some money to buy condoms with. And that was enough to destroy him.

In this environment, you'd have to be a moron with no instinct for self-preservation to vie for leadership in the ranks of congressional Republicans. McCarthy's rise as the initial favorite was proof positive of that. But his fall shows that the same lack of awareness or baseline intelligence necessary to want the job also makes it hard to hang on to, because you're simply not smart enough to avoid walking into the kinds of traps that McCarthy strolled right into. That is the pickle that Republicans have made for themselves: Anyone with the savviness you need for effective leadership is going to stay well the hell away from the speakership.

Maybe John Boehner is never actually going to have a chance to retire, after all.