"Hopefully his experience in Hungryia will allow him to finally broker a peace treaty with Narnia," Colbert said. 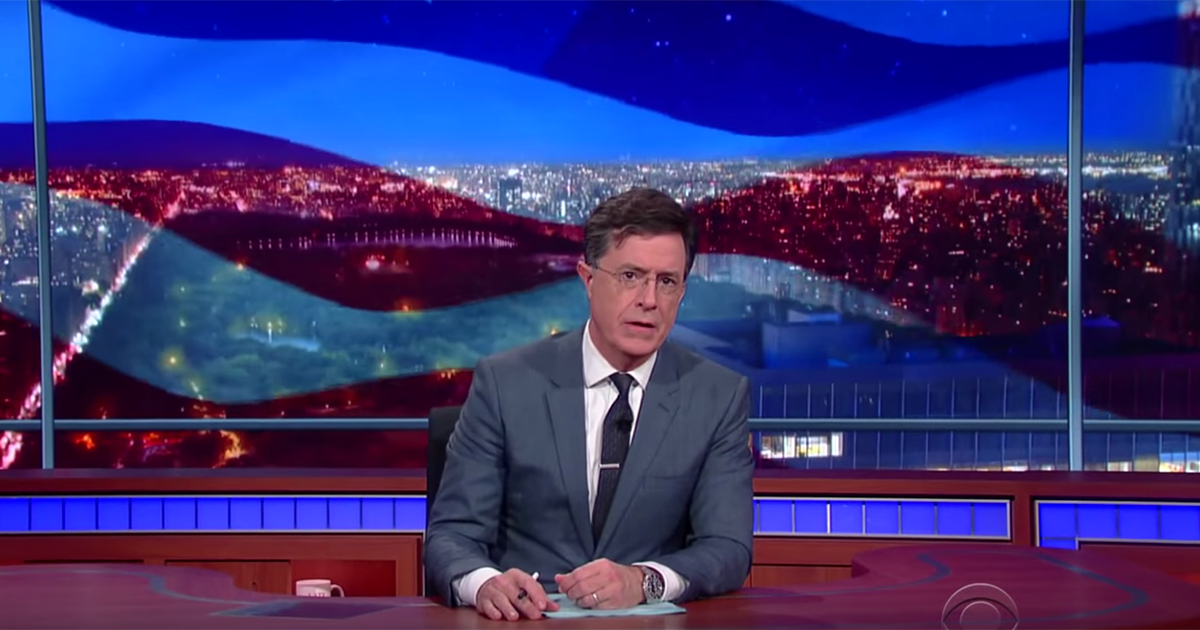 Candidates have a hard time speaking when they go off the cuff sometimes, and when they do, Stephen Colbert will be waiting. The Late Show host dedicated some of Wednesday night to an impassioned speech of words that sounded passionate in their passion-y passion without actually saying anything at all. Like the 2007 Miss South Carolina of politics, and the Iraq.

"They cameras are always on these fellas, OK," Colbert said in the defense of candidate stupidity. "People are just waiting for them to slip up so they can make fun of them on their late-night comedy shows. What a bunch of of jerks!" Colbert couldn't be more right! He's not alone either. There are even some sick, heartless, bastards out there who wakes up in the wee hours of the morning just to comb the internet and scroll through the DVR to find comedy gold making fun of political candidates. Who does that?

"The candidates out there might not mean always what they say," Colbert said. "But so what! We're not mind readers in the public. We can only guess at what they mean by what comes out of their mouths."

Colbert said that House Speaker hopeful Kevin McCarthy has the whole "House" part down, but he's having a rough time with the "speaker" part. He rolled a clip of McCarthy talking about the complexities of the two chamber Congress saying that he can't just law and stuff all willy nilly, he has to go up against the Senate too. Only, the way he articulated it sounded a bit like the entry level class of Hooked on Phonics.

"Strong, English-type words," Colbert criticized. "'Today is in too important, the day that you should really look to, and the pressure mounts. If not who?' Now, I'm not sure what any of that means, but I'm sure it means just as much as this foreign policy speech he gave last week."

In that speech, McCarthy discussed "engaging the war of radical Islam, if our life depended on it." He went on to say that the "White House is putting us in tough decisions for the future." Complex ideas. McCarthy then talked about places he's traveled including Hungryia, a country presumably near Frankfurter, Germany and a quick plane ride from Cookietown, Oklahoma.

"Hopefully his experience in Hungryia will allow him to finally broker a peace treaty with Narnia," Colbert said.

"Now, some people say McCarthy's trouble in expressing his vision of leadership, or anything else, makes him disqualified to be Speaker of the House, but to them I say: My fellow Americans," Colbert began with the faint hue of red and white stripes waving in the digital breeze behind him. "Long before times have we faced great challenges of this nation, but America is anything if not a land from opportunity. Of the Speaker and The House, Kevin McCarthy wants to rise that opportunity and let every mouth speech as one. It's the circle of life and it moves us all, because without it brave leadership, America won't be left behind. I believe it was Ronald Reagan who said, 'Thomas Jefferson.' And those are words are still are still true today. Thank you. My God thank America and hello."

Colbert also walked through the notorious Jeb! gaffe of "stuff happens" line to illustrate the complexities of candidate wording. Polls have Jeb! in 5th place and that means "all he needs to win the nomination is in the next debate, for the stage to collapse... So what Jeb needs to do to clench this thing is to clearly articulate to the American people what kind of leader he'll be... Now in the face of tragedy 'stuff happens' seems a bit cavalier and I believe it would be a bold choice at a funeral..."

Let's be real, politics-ing is hard work. You have to know things and be able to speak about those things with words that sound like they matter. Thankfully we can rely on Colbert to break it down for us. And Thomas Jefferson.